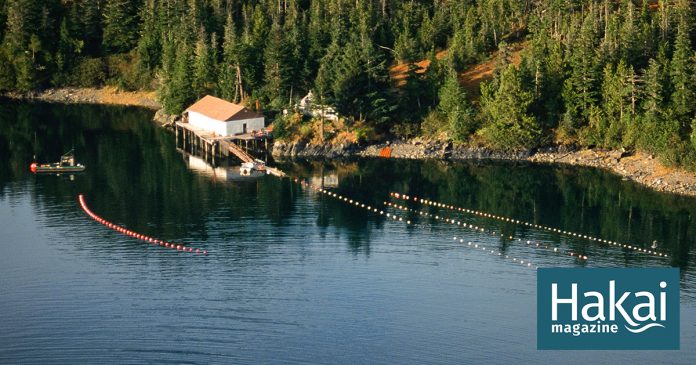 On a float house in Ketchikan’s George Inlet, dozens of cylindrical tanks teem with oyster larvae that range from tiny specks to small pebbles. These larvae number around 15 million, and once they’re done growing in the cold Alaskan waters, they’ll be sent to market across the state.

As the Pacific Ocean acidifies—a consequence of carbon emissions—oyster farms off California, Washington State, and British Columbia have struggled to get larvae to grow into seed, the stage when young oysters’ shells have formed. Though scientists are not quite sure why, the water off Southeast Alaska hasn’t seen the same deleterious effects. Now, entrepreneurs and investors are eyeing the state, looking to turn a profit off the short-lived gains of climate change.

Until recently, the major choke point for the Alaskan oyster industry was the limited availability of oyster seed. While adult oysters grow well in the cool Alaskan water, the temperature is too brisk for them to reproduce naturally. Any oyster farmer trying to get into the game had to import larvae or seed from hatcheries farther down the coast.

But over the past five years, scientists and entrepreneurs have been working on developing Alaska’s home-grown oyster seed operations.

OceansAlaska, the state’s first commercial shellfish hatchery, imports oyster larvae and rears them into seed in cylinders circulating with seawater. Nearby, a monitoring system called a Burk-o-Lator, one of only three in the state, constantly measures the acidity of the water. It took a few years for OceansAlaska to work out the kinks, but in 2012 the company began shipping seed to oyster farmers around the state. In the long-term, the organization, which runs as a nonprofit, hopes their efforts will lead others to build larger hatcheries in Alaska to supply seed for all the oyster growers in the region and even beyond.

The push to increase Alaska’s oyster seed operations has coincided with a sudden decline in larvae production down south, where larvae have been hampered by warming water and ocean acidification. In the mid-2000s, increasingly acidic seawater pumped into southern oyster hatcheries began killing billions of larvae, eating away at the young oysters’ shells before they could fully form, and preventing them from developing into seed. The effects of this have rippled through the market. In 2015, for instance, Canadian oyster farmers saw a 70 million seed shortfall.

But the southern oyster farmers’ plight has been Alaska’s boon. Gary Freitag, an agent with the National Oceanic and Atmospheric Administration’s Alaska Sea Grant who’s been working with OceansAlaska to develop the state’s oyster industry, says Alaskan seed has been sold to growers in California and Washington State.

“We sent some seed down to California this year, and they said it’s the best seed they’ve seen in 10 years,” says Freitag. “There’s been a huge need for it in the market, because there’s just not enough seed to go around, period.”

Though some Pacific oysters have shown genetic variability in how they respond to acidified waters, it’s unlikely Pacific oysters will continue to thrive as far south as California as acidification seriously alters the ocean’s chemistry in the coming decades. The question now is how long Alaska’s oyster industry will be able to boom before it busts.