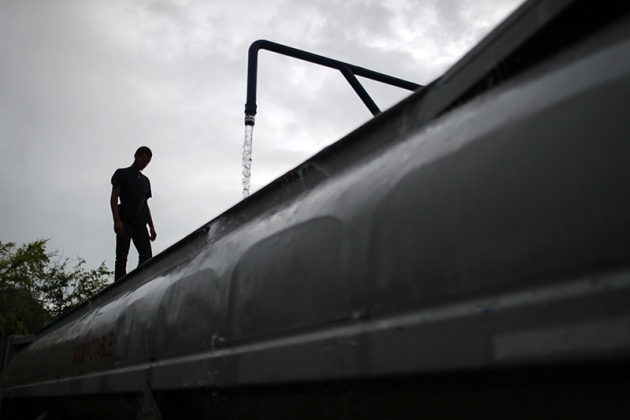 Nightfall sets a hard deadline for a team of public-health researchers in Puerto Rico. Since Hurricane Maria hit on 20 September, leaving large swathes of the island without a reliable power supply, the scientists have rushed home each night to avoid being in the streets after dark. Many lack running water, and most have limited telephone access.

Yet the team –— co-led by José Cordero of the University of Georgia in Athens — has managed to contact several hundred women to begin assessing whether Hurricane Maria has worsened drinking-water contamination, stress and infectious disease that could harm developing fetuses. This wasn’t what the researchers set out to study six years ago when they started a project to assess the impact of pollution on pre-term births. But Cordero’s team is one of several  research groups have scrambled to quantify Hurricane Maria’s immediate health impacts, even as team members struggle to fulfil their own basic needs.

The devastation that Cordero saw on a recent visit to Puerto Rico, his birthplace, shocked him. “I thought I was prepared, but I wasn’t,” he says.

Even before the hurricane, the island’s 18 ‘Superfund’ sites — areas so polluted that the US Environmental Protection Agency deems them hazardous to human health or the environment — posed a potential risk to pregnant women, says Ingrid Padilla, an environmental engineer at the University of Puerto Rico at Mayagüez. Twelve of these sites sit on karst, a geological formation made of porous rock that allows toxic chemicals to flow down from the surface into groundwater.

Padilla’s previous research suggests that flooding and other disturbances can quickly bring toxic substances in groundwater back to the surface, and carry them into the water supply. Now, she and her colleagues are collecting hair and blood samples from the research cohort to determine whether pregnant women are being exposed to hazardous chemicals, such as phthalates and chloroform. Since the hurricane hit, the researchers have begun to collect and test groundwater from karst regions and tap water from the homes of people living there.

Other research teams are worried that water that has pooled in hurricane debris could provide a breeding ground for disease-carrying mosquitoes. At the height of the Zika epidemic in 2016, experts debated whether a massive hurricane would destroy mosquito habitat or enhance it, says Carmen Zorrilla, an obstetrician and gynaecologist at the University of Puerto Rico in San Juan. The evidence is still unclear, she says, and logistical problems may make it impossible for researchers to gather enough data to provide answers.

In some areas where hospitals faced extensive storm damage, the only medical care available is emergency treatment. Screening for the Zika virus is a low priority, and infected adults rarely experience severe symptoms and are unlikely to seek medical treatment.

There are also few labs on the island that can test samples for Zika and other mosquito-borne diseases. Like many Puerto Rican facilities, the US Centers for Disease Control and Prevention (CDC) dengue lab in San Juan lost power during the hurricane and was closed for a week. Diesel generators kept its freezers running to preserve blood and other biological samples, but the lab is still running on generator power  and is behind on testing some samples. Shipping delays destroyed reagents that the lab had ordered, since the chemicals were not kept consistently cold during transport.

Lab director Stephen Waterman says that the CDC is collecting data on the incidence of mosquito-borne disease and other hurricane impacts. But its priority is to help US government workers and local communities recognize mosquito breeding grounds, and to provide technical help on efforts to control the spread of the insects. Agency staff would also like to verify reports that leptospirosis — a waterborne bacterial disease that is spread by rats — has sickened dozens of people. “We’re focused on preventing disease,” Waterman says.

Yet the ruined facilities and lack of power continue to tax public-health workers’ ability to know where hazards lie. Take the numerous diesel generators running on the island, which produce visible plumes of grey smoke. Benjamin Bolaños, a microbiologist at the University of Puerto Rico in San Juan, worries that these emissions could harm people with respiratory illnesses, but that the effect will be difficult to quantify. “We are blind because probably the [air quality] monitors were destroyed by the hurricane,” he says.

This makes the prospect of more months without reliable power even more frightening. “The kind of work we’re doing is not because it would be interesting to do,” Cordero says. “It has to be done now because a few years from now, it’s too late.”