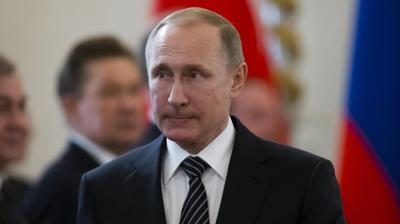 Moscow: Russian leader Vladimir Putin on Thursday said climate change was not caused by human activity, as the White House announced that President Donald Trump would decide by May on continued US participation in the landmark Paris Agreement limiting global carbon emissions.

One day after visiting the Franz Josef Land archipelago in the Arctic, Putin claimed that icebergs had been melting for decades and suggested that global warming was not mankind’s fault.

“The warming, it had already started by the 1930s,” Putin said in comments broadcast from an Arctic forum held in the northern Russian city of Arkhangelsk.

“That’s when there were no such anthropological factors, such emissions, and the warming had already started.”

The Kremlin strongman added: “The issue is not stopping it… because that’s impossible, since it could be tied to some global cycles on Earth or even of planetary significance. The issue is to somehow adapt to it.”

The declaration came as the White House said Trump would make his pronouncement on the Paris Agreement before a meeting of G7 leaders in Sicily that is scheduled to begin May 26.

Putin supported his argument by saying that an Austrian explorer who had a “photographic memory” visited the Franz Josef Land archipelago “in the 1930s.”

Twenty years later the explorer was shown photographs from another expedition there “by the future king of Italy” and concluded that “there were fewer icebergs there,” Putin said.

It wasn’t immediately clear which explorers Putin was referring to and Italy did not have a king in the 1950s.

Austrian explorer Julius von Payer discovered and mapped the archipelago during a 1872-1874 expedition.

The only Italian expedition to the area was organised in 1899 by Prince Luigi Amedeo, who was also an explorer.

The archipelago was declared Soviet territory by the 1930s.

Putin had previously hailed global warming for exposing natural resources and transport routes which had long been too expensive to exploit.

He had also once speculated that warming by “two or three degrees” could be a good thing for Russians who would no longer need fur coats.

The latest declarations were a far cry from Putin’s speech at the United Nations Climate Change Conference in Paris in November 2015.

“The quality of life of all people on the planet depends on solving the climate problem,” he had said, adding that Moscow had “exceeded” its obligations under the Kyoto Protocol.

“Russia’s efforts have slowed global warming by almost a year. We were at the same time able to nearly double our country’s GDP over the same period,” he said.

“We consider it crucial that the new climate agreement be based on the UN Framework of Climate Change and that it be legally binding.”

On Thursday, while his Finnish counterpart Sauli Niinisto called climate change a “serious threat” for the Arctic, Putin said that it brings “more propitious conditions for using this region for economic ends.”

The Russian leader also wished luck to anti-climate litigator Scott Pruitt, who was confirmed last month as the new chief of the US Environmental Protection Agency to the horror of the scientific community.

Asked by moderator Geoff Cutmore of the CNBC what he thinks of the appointment of Pruitt, a climate sceptic who wants to roll back Washington’s participation in the Paris climate accord, Putin said Pruitt’s views deserve to be heard.

“Positions and suggestions of those who don’t agree with their opponents are not so stupid,” Putin said. “God grant him health and success, everybody should listen to one another and only then you can find an optimal solution to the problem.”

Russia is warming at twice the rate of the rest of the world, according to government data, and both scientists and emergencies officials have indicated that disasters such as deadly floods and wildfires are influenced by climate change.