This commentary, authored by Ayesha Tandon, was originally published on the Carbon Brief website on Feb 5, 2021. It is reposted below in its entirety. Click here to access the original article and comments posted on Carbon Brief. 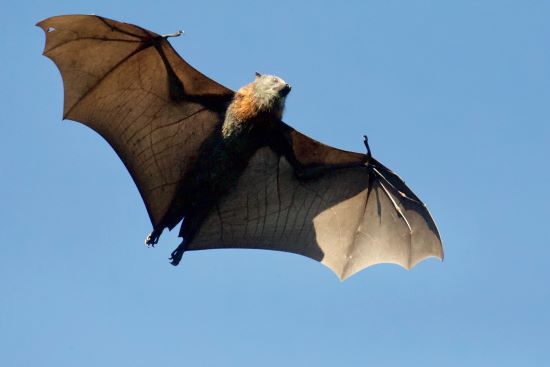 Photo by James Wainscoat on Unsplash

A new study suggests that climate change is enabling the evolution of new coronaviruses by creating “hotspots” for multiple bat species.

The study, published in the journal Science of the Total Environment, finds that Yunnan province in southern China, as well as neighbouring regions of Myanmar and Laos, have become global hotspots of bat species “richness” over the past century.

Around 40 species of bat have moved into the region, the authors say, bringing roughly 100 additional types of coronaviruses with them. This is due to climate change-induced changes in vegetation, they argue, adding that the “bat-borne ancestors” of SARS-CoV-1 and SARS-CoV-2 – the latter being the virus that causes Covid-19 – are thought to have originated there.

However, many scientists not involved in the study say they have concerns about the data used in the study and the conclusions it draws. One tells Carbon Brief that the study makes “too many assumptions…to conclude that climate change could have increased the likelihood of the pandemic occurring in this way”.

The past century has seen changes in bat species richness – the number of bat species in a given region – across the world. The new study points to shifting vegetation types as a key factor behind these changes.

Estimated increase in the local number of bat species due to shifts in their geographical ranges driven by climate change between the 1901-1930 and 1990-2019 periods. The Yunnan-Myanmar-Laos hotspot is enlarged in the box. Source: (Beyer et al. 2021).

The map shows that Yunnan (a southern Chinese province) and neighbouring regions in Myanmar and Laos have seen the biggest increase in bat species diversity. These are the areas of dark red highlighted in the box. There was also a notable increase in central Africa, plus several regions of Central and South America, the study says.

Dr Robert Beyer, from the University of Cambridge Zoology department and the Potsdam Institute for Climate Impacts Research, is the lead author of this study. He tells Carbon Brief that the impact of climate change is expanding the habitat for bats in the region:

“We know that the overall region is inherently rich in bat species, however, our data suggest that many of these bats were not able to use a significant portion of the local environment a century ago. Climate change has made many of these habitats more suitable for bats, allowing them to expand their ranges into new areas.” 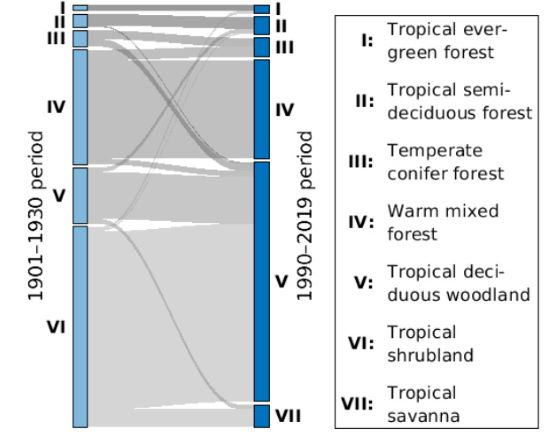 The chart below shows that tropical forests are suitable habitats for the vast majority of bat species. 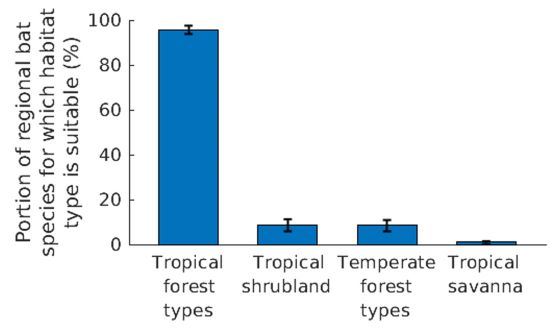 However, there are other factors that can affect bat populations that weren’t included in the study, the authors note. These include land use change from human activity, hunting, invasive species and pollution.

More than 60% of emerging infectious diseases in humans are “zoonotic” – meaning that they originate in animals. Last year, Carbon Brief published an explainer that unpacks how climate change and biodiversity disturbance could raise the risk of diseases being transmitted from animals to humans.

Bats carry the highest proportion of zoonotic viruses out of all mammals. The world’s bat population carries roughly 3,000 different types of coronavirus, and each individual species harbours an average of 2.7 different coronaviruses alone. 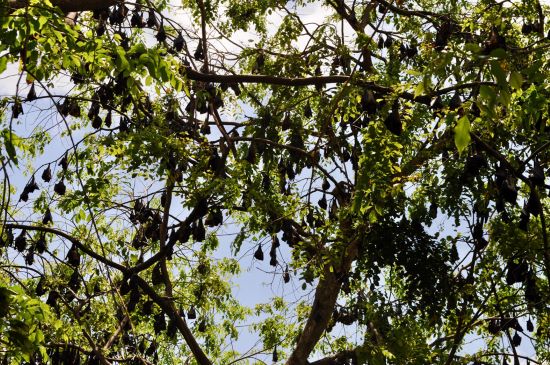 The paper estimates that climate change-driven changes in vegetation drew an extra 40 species of bats into the hotspot highlighted in the map, leading to roughly 100 more coronaviruses in the area.

Beyers tells Carbon Brief that this allows more opportunities for the virus to be transmitted or evolve, and may have been how SARS-CoV-2 shifted species:

“We estimate that the number of bat species, and of bat-borne coronaviruses, in the likely origin of SARS-CoV-2 has substantially increased due to climate-driven changes in the natural vegetation. This process has likely created significant new opportunities for the virus to be transmitted or evolve.”

The piece notes that the SARS-CoV-2 virus is thought to have originated in bats in Yunnan, and that civets and pangolins carrying these viruses were then taken to wildlife markets in Guangdong and Wuhan, where the virus first began to infect people.

To model the change in bat richness density, the authors created a map of the world’s vegetation using a global temperature dataset and a vegetation model. They then used information about the vegetation requirements of the world’s bat species to work out the global distribution of each species.

However, many scientists are sceptical of the methods used and the conclusions drawn.

Dr Dann Mitchell – joint Met Office chair in climate hazards at the University of Bristol, who was not involved in the study – tells Carbon Brief about issues with the climate data used:

“Using some of our best climate observations, the authors identify a strong climate-driven signal over Myanmar and Laos, but there will be large uncertainties associated with variables such as cloud cover in that region, especially 100 years ago in South Asia – there is a lot of missing data there.”

Furthermore, to model bat species distributions, the authors rely on data from the International Union for Conservation of Nature bat specialist group. Dr Matthew Struebig, from the University of Kent, is a member of the group, and warns that this map distribution data is “grossly insufficient”. He adds:

“Many species are not fully assessed, and too many are so poorly known they are only documented as a few dots on a map. Very little is known about optimum or preferred vegetation types – especially in the region highlighted in this study.

The study estimates the bat fauna of southern China and neighbouring countries increased by a whopping 40+ species in around 120 years. To put that into perspective, that would mean the number of bat species in Myanmar doubled in little over a century. Simply looking back at old species accounts and ecological studies from the region shows this simply did not happen.”

He adds that he is “sceptical of the link” between climate change and bat distribution change, and that the study makes “too many assumptions for me to conclude that climate change could have increased the likelihood of the pandemic occurring in this way”.

He concludes that it “seems premature to conclude that climate change has had a big effect on the emergence of SARS-CoV-2”.

Dr David Redding, a research fellow at the Zoological Society of London, agrees, noting that “while it is useful to think about these types of links it is important to underpin these investigations with rigorous science”. He tells Carbon Brief:

“We know very little about the geographical origins of SARS or SARS-CoV-2. Indeed, the paper that is referenced by the authors to link the putative SE-Asia ‘hotspot’ to the possible origin of these pathogens, merely mentions that Vietnam and Laos were not examined by Chinese scientists and, therefore, could not be discounted as possible source locations.”

He adds that there are many other “missing links” in the research, for example that “we know very little about how many viruses circulate between individuals in host species”.

Prof Hans-Otto Poertner – head of biosciences at the Alfred Wegener Institute – tells Carbon Brief that though the analysis is “very interesting”, there are still “questions that are not clear” to him. This includes where the increase in species richness comes from, and whether there has been a timeseries of species observations supporting the modelled findings, he says.

And Prof Kate Jones – chair of ecology and biodiversity at University College London – stresses that although climate change “has a role to play in changing species distributions to increase ecological hazard”, there are other factors that are also important to consider.

She notes that the risk of “spillover” of a virus from a particular species to humans is a “complex interplay of not only ecological hazard but human exposure and vulnerability”. She adds:

“It may turn out that increases in human populations, human movement and degrading natural environments through agricultural expansion have a more important role to play in understanding the spillover process of SARS-CoV-2.”