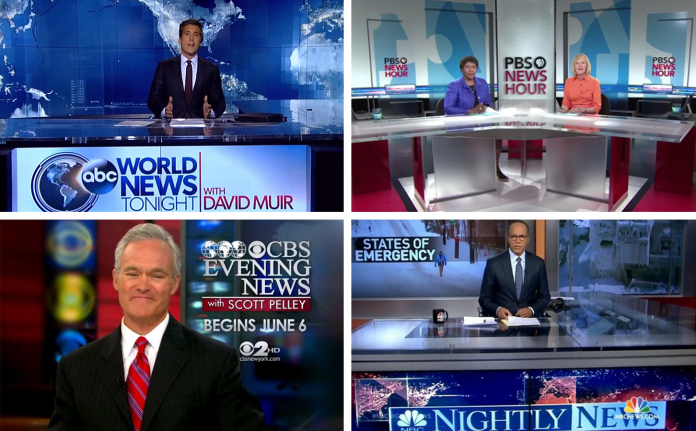 It’s not that there isn’t enough climate change news to cover. 2015 was the hottest year on record at that point, the Paris agreement was signed by dozens of nations, and California was in its worst drought in perhaps millennia. But if you get your news from the networks, there’s a good chance you didn’t know any of this was going on.

Stories about climate change on network news — ABC, NBC, CBS and Fox (the network, not Fox News) — dropped 66 percent, according to research by Media Matters.

If you break it down into actual time spent, network news is devoting a shockingly small number of minutes per year on climate change. It’s shocking because, as a recent Gallup poll shows, a majority of Americans are crossing the divide between those concerned about climate change and those who think it’s baloney.

By its own description, Media Matters is a “501(c)(3) progressive research and information center dedicated to comprehensively monitoring, analyzing, and correcting conservative misinformation in the U.S. media.” It’s a media fact-checking organization. Most fact-checkers focus on politicians. Media Matters analyzes statements and coverage of the media itself.

It does this because what the media choose to cover is important. In fact, in 1927, the Federal Radio Commission (later the FCC) was created by Congress in part to ensure that radio stations (which transitioned into TV stations) were broadcasting in the public’s interest, whether that be news or entertainment. At one point, there was a rule that said networks had to devote equal time to all political candidates to prevent bias.

Before the airwaves were “deregulated” in 1996 by the Telecommunications Act, Congress saw value in limiting bias on the airwaves. Now, it’s up to the viewers to decide — but they can’t do that if they’re not getting the information in the first place.

This report is important right now, when Congress and the White House actively seek to limit the role of science in policymaking.

On Wednesday, the House Committee on Science, Space and Technology held a hearing to (ostensibly) debate the scientific method. It devolved into finger-pointing, name-calling and one Republican congressman yelling at Democrats and a leading climate researcher. In one down-to-Earth moment, Suzanne Bonamici (D-Ore.) asked the panel of scientists what Congress could do to advance science, “instead of holding this unproductive hearing.”

Later that afternoon, Congress voted to limit which scientific studies the Environmental Protection Agency can use to create regulations. If signed, the law would be entirely subjective — the EPA will be able to use only “the best available science.”

Best according to whom?

In an example of how this “best science” thing would work, EPA Administrator Scott Pruitt defied his own scientists and said no thanks on a rule that would protect children from developmental disorders.

The EPA’s own scientists say the chemical chlorpyrifos, which can cause memory decline in young children, is showing up in our food and water at unsafe levels. “The chemical was banned in 2000 for use in most household settings but today is still used at about 40,000 farms on about 50 different types of crops, ranging from almonds to apples,” the New York Times reported Thursday.

Pruitt’s response: We need to be “certain” that the chemical is causing defects before we limit it in our food.

If you have ever taken a fifth-grade science class, you know that there’s no such thing as scientific certainty. You will never hear a scientist say she is “100 percent certain” about anything, because that’s not the way science works. The U.S. judicial system understands this:

There is no common definition across science or within disciplines as to what threshold establishes certainty. Therefore, whether couched as “scientific certainty” or “[discipline] certainty,” the term is idiosyncratic to the witness.

In the case of chlorpyrifos, the expert “witness” is the scientist.

I’m not surprised that the networks don’t want to talk about climate change — it’s a hot-button political issue because politicians made it that way. As it turns out, politicians are inherently the only people who can politicize a subject.

Here’s the truth, though: Despite the lack of coverage in 2016, half the country thinks climate change is caused by human activity and believe it’s a problem. Less than a quarter of our population think climate change is either not happening or is no big deal.

The media have a responsibility to report the facts. If scientists agree an extreme weather event was made worse by climate change, viewers need to know that, not just because it is true, but because people do think it’s a problem. I don’t know whom network news and Congress are serving by turning a blind eye to climate change, but according to these poll results, it’s not the voters.