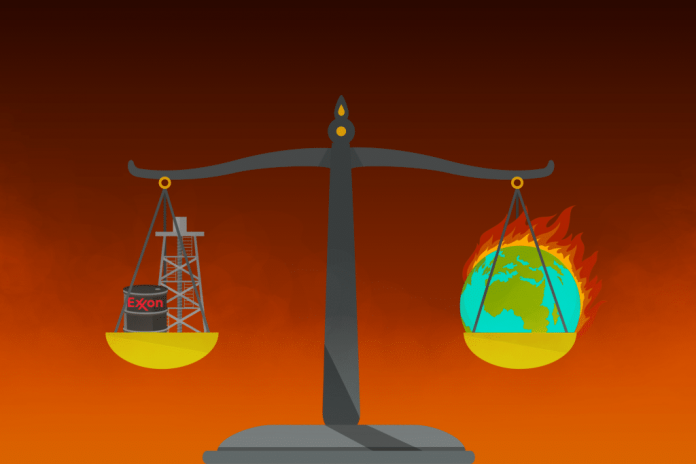 In recent years, communities across the United States increasingly have turned to the courts to hold oil and gas companies accountable for alleged fraud — which has worsened the climate crisis — and now those lawsuits are inching towards trial. Despite dogged attempts from industry lawyers to force the litigation into federal courts, where they see an easier path to dismissal, they continue to strike out as judges from California to Connecticut rule that state courts are the appropriate venues for these climate accountability lawsuits.

The latest addition to the fossil fuel industry’s long procedural losing streak came on November 12 when a federal district judge decided that the District of Columbia’s climate liability lawsuit belongs in the local court, where it was originally filed in June 2020. As with other climate liability lawsuits, lawyers for the oil and gas companies in the District of Columbia case devised a multitude of arguments claiming that only federal courts have the jurisdiction or authority to handle such lawsuits. But federal courts have not been buying these legal theories.

“Defendants raise seven theories for the Court’s subject-matter jurisdiction. Each, they say, is an independent ground for removal. None is,” Judge Timothy J. Kelly of the U.S. District Court for the District of Columbia wrote in his recent opinion. He joins twelve other federal district judges and five appeals courts in dismissing all of the fossil fuel companies’ arguments for federal jurisdiction. Several of the appeals courts have even ruled twice to affirm that state courts are the right venue for these cases.

The District of Columbia’s case is among two dozen lawsuits filed by cities, counties, and states against the fossil fuel industry over its role in attacking climate science and spreading disinformation in order to stave off climate action and protect profits. A handful of coastal California communities brought the first of these cases in 2017. Since then, the lawsuits have been bogged down in procedural wrangling.

Local and state governments are making claims under local and state laws, invoking issues such as product liability – used to hold manufacturers responsible for selling a defective or harmful product- and consumer protection – designed to protect against misleading marketing and fraud — and have filed their complaints in state courts. Fossil fuel companies are pushing the cases to federal courts, fighting tooth and nail to avoid litigating in state courts, where they could face discovery and trial.

“Chevron respectfully disagrees with the district court’s decision remanding this climate change action to the District of Columbia municipal court. This case belongs in federal court because climate change is a global phenomenon that requires a coordinated federal policy response, not a patchwork of lawsuits brought in municipal and state courts,” Theodore J. Boutrous, Jr. of Gibson, Dunn and Crutcher, and counsel for Chevron Corporation, said in an emailed statement.

“The industry’s efforts to keep the cases from proceeding in state court for almost six years now indicates that, contrary to its public messaging otherwise, it thinks there’s a reason to be worried,” Karen Sokol, a law professor at Loyola University New Orleans College of Law, told DeSmog via email.

One advocate for polluter accountability suggested that these procedural maneuvers represent the fossil fuel industry’s strategic bid for swift dismissal of the cases through federal courts.

“Once again, the courts have seen through Big Oil’s attempts to mischaracterize these cases, and now the people of D.C. are one step closer to having their day in court,” Alyssa Johl, vice president of legal at the Center for Climate Integrity – which campaigns for holding climate polluters accountable — said in an emailed statement.

The District of Columbia case, brought by Attorney General Karl Racine two years ago, names oil majors BP, Chevron, ExxonMobil, and Shell as defendants. It alleges they misled District consumers around the climate consequences of their products and continue to mislead through deceptive advertising and greenwashing. The lawsuit contends that this behavior violates the District’s Consumer Protection Procedures Act.

The District of Columbia and others bringing these climate liability lawsuits say their claims are based on the deceptive conduct of the fossil fuel companies, not on the emissions or production of fossil fuels. The companies, however, have tried to paint the cases as attacking production.

“We do not believe the courtroom is the right venue to address climate change, but that smart policy from government, supported by action from all business sectors, including ours, and from civil society, is the appropriate way to reach solutions and drive progress,” said Natalie Gunnell, spokesperson for the Shell Group, which is named in the District of Columbia suit and several similar cases.

However, Judge Kelly and other judges have pushed back against this framing that centers the cases in this way.

Similarly, in a ruling issued this April, an appellate court recognized that Baltimore was suing oil and gas companies not over the production and sale of fossil fuel products, but for mispresenting the climate harms of these products. As the court wrote, “it is the concealment and misrepresentation of the products’ known dangers – and the simultaneous promotion of their unrestrained use – that allegedly drove consumption, and thus greenhouse gas pollution, and thus climate change.”

That Baltimore ruling followed a directive from the U.S. Supreme Court that the Fourth Circuit Court of Appeals and three other appeals courts review all of the arguments for federal jurisdiction from the fossil fuel companies. Each appellate court has since rejected the companies’ additional arguments.

Fossil fuel giants are now returning to the Supreme Court with renewed and additional petitions, hoping the highest court will overrule the lower courts’ decisions about where the climate cases should be tried.

Meanwhile, legal developments continue to frustrate the industry’s attempts to evade accountability. Cases filed by Hawaiian communities and by the state of Massachusetts are proceeding to the discovery phase in state courts, a pre-trial process of gathering evidence, during which internal industry documents could surface and shed new light on the extent of the industry’s deceptive behavior. Last month a federal district judge in California, who had previously tossed cases filed by Oakland and San Francisco, issued an order to send the cases, which were revived by a federal appeals court, back to state court. And New Jersey Attorney General Matthew J. Platkin followed in the footsteps of seven other Democratic state prosecutors in filing a consumer fraud case against ExxonMobil and other oil majors.

A spokesperson for Exxon did not respond to a request for comment. BP America declined to comment.

Judge Kelly’s order to send the District of Columbia’s case back to the lower court is temporarily paused as the oil companies prepare an appeal, as they have every other time a federal judge made a similar ruling.

“Chevron plans to appeal this ruling to the D.C. Circuit Court of Appeals,” Boutrous, Jr. said.

None of these appeals, however, have been successful. Loyola University’s Sokol sees these repeated rejections as further affirmation that local and state governments have the right to try these claims in state courts.

“These cases were filed in state court to hold polluters accountable for climate deception under state law,” she said. “And that’s where courts have unanimously agreed they should proceed.”