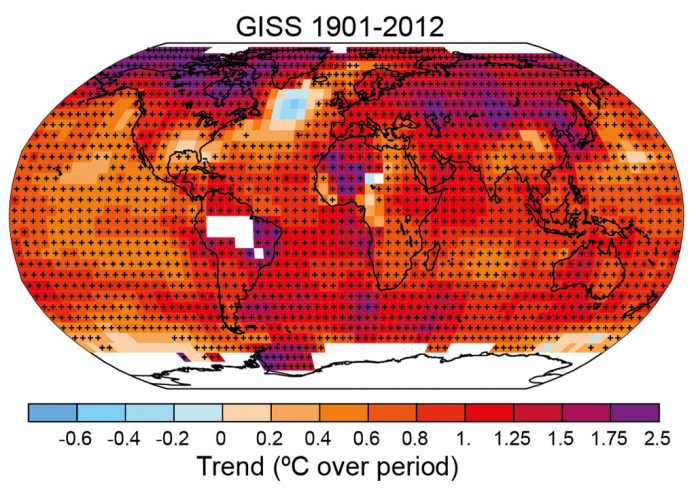 As global temperatures continue to rise, there has been a stubbornly cool patch of ocean in the North Atlantic that has intrigued scientists for years.

This is the North Atlantic warming “hole” – also known as the “cold blob”. While the world has seen temperatures rise by an average of 1C over the past century, the warming hole – just to the south of Greenland – has cooled by as much as 0.9C.

Previous research has linked the warming hole to a weakening of an ocean current in the North Atlantic, which brings heat up from the tropics.

Now a new study – published in Nature Climate Change – suggests that a number of other factors are also involved. These include “changes in the high latitude ocean circulation” and the cool sea surface creating “more low-level clouds”, the lead author tells Carbon Brief.

In climate model simulations, these changes are “clearly attributable to anthropogenic [human-caused] forcing“, the study finds, and they are “critical to understand[ing] the past and future evolutions of the warming hole”.

Most global maps of surface temperature change reveal a swath of reds and oranges, highlighting warming across much of the world.

But there are pockets where warming has not been so prominent or cooling has even occurred. One of these areas is a patch in the North Atlantic.

This warming hole is particularly clear as a blue blob on the map below, from the Intergovernmental Panel on Climate Change’s most recent assessment report, which shows the observed rise in global average surface temperatures from 1901 to 2012.

Research suggests that the warming hole is linked to a weakening of the Atlantic Meridional Overturning Circulation (AMOC) – a system of currents in the Atlantic Ocean that brings warm water up to Europe from the tropics and beyond.

The AMOC forms part of a wider network of global ocean circulation patterns that shifts heat all around the world. It is driven by the cooling and sinking of salty water in the high latitudes of the North Atlantic.

Studies have indicated that the AMOC has weakened since the mid-20th century (or perhaps even longer), caused by an influx of freshwater into the North Atlantic from a melting Greenland ice sheet and increasing rainfall in the region.

This extra freshwater reduces the sinking of the cooling seawater, which – in turn – reduces how much warm water is dragged up from the tropics, weakening the circulation.

Less warm water coming up from the tropics has a cooling effect on the North Atlantic, which offsets the general ocean warming caused by rising global temperatures. As a result, the warming hole is “mainly attributed to an AMOC slowdown”, says Paul Keil – a PhD candidate at the Max Planck Institute for Meteorology and lead author of the new study.

However, the study reveals that this is just one of a number of factors – in both the ocean and the atmosphere – contributing to the cold blob.

To unpick the relationship between the warming hole, AMOC and climate change, the researchers ran a series of climate model experiments. They used just the one model – built by the Max Planck Institute – but ran a “grand ensemble” of 100 simulations of the past (1850-2005) and another 100 that go 150 years into the future where atmospheric CO2 levels rise by 1% per year.

In the first set of experiments, the researchers fixed ocean-heat transport to its usual seasonal fluctuations – removing any longer-term changes – to focus specifically on the role of the atmosphere.

They found that, without the ocean changes, the models still produced a warming hole – “albeit not in the form of an absolute cooling, but rather as a weaker warming”.

Further investigations suggest that cloud changes have a “small but discernible contribution to the warming hole”, the paper says. Keil explains:

Specifically, the results indicate that, while the North Atlantic is receiving less heat from the tropics, it is “also losing more heat to the Arctic”, says Keil. This model simulations suggest that the increased transport of ocean heat away from the North Atlantic high latitudes is in part down to “the strengthening of the subpolar gyre, which redistributes heat horizontally”, says Keil.

This subpolar gyre is an anti-clockwise circulation pattern in the surface waters of the North Atlantic. The reasons for the strengthening of the gyre are “somewhat complex”, says Keil, and will be the topic of a forthcoming paper. However, in short, the changes are “indeed due to human greenhouse gas emissions”, he adds.

The graphic below, taken from the paper, illustrates the main drivers of the warming hole. It shows the increase in cloud reflecting incoming sunlight, as well as the changes to the gyre circulation (blue arrows) and AMOC (red arrows). The shading indicates the warming hole in the future climate model simulations.

Wood, who was not involved in the new study, tells Carbon Brief:

Indeed, in its 100 simulations of past warming, the study finds that “they all had a warming hole”, says Keil, but not all of them simulated a weakening AMOC. He explains:

“What was common to all simulations was that the heat export to higher latitudes increased in response to global warming. This increase explains mostly the warming hole formation and so is attributed to human greenhouse gas emissions.”

The implication is that while the warming hole can be attributed to human-caused climate change, and the weakening AMOC likely plays an important role in its existence, Keil and his colleagues cannot be sure that past changes in AMOC themselves are human-caused. He adds:

“Actual [direct] observations of the AMOC are only available since 2004 [via a network of moored sensors] and, although there has been a decline during this period, it may well be due to natural variability.”

This also means that using the warming hole to infer AMOC strength – as occurs in some research – “should be done with caution”, says Keil, “since other processes are involved besides the AMOC, making the relationship more complex and changing over time”.

The findings support earlier research that the drivers of the warming hole in the past will not necessarily be the same as those in the future, says Wood.

For example, he explains, while a weakening AMOC is one of “many other factors potentially at play” in the past, “for future climate change – dominated by greenhouse gas increase – changes in ocean heat transport, linked to a weakening AMOC, play a strong role in the projected warming hole”.

Dr Femke de Jong, a scientist at the Royal Netherlands Institute for Sea Research, who was not involved in the study, but has published research on the warming hole, tells Carbon Brief that the highly variable North Atlantic “can obscure smaller trends in time series and makes it difficult to attribute these trends to underlying mechanisms”.

Using a collection of model simulations to help understand these mechanisms is “the way forward”, de Jong says, but the “mixed layer” model configuration the study uses “is a very crude representation of the ocean that does not adequately capture ocean processes”.

A “mixed layer” approach treats the ocean as a “slab” and does not explicitly model the ocean circulation. It is used as a way to simplify climate model simulations and, thus, speed them up significantly.

Keil points out that using this approach supports the point their paper is making. He explains:

“Even in these ‘crude’ simulations we see a weak warming hole, which means that the warming hole is partly driven by atmospheric processes. We deliberately create this somewhat artificial world to learn more about the mechanisms behind the warming hole, even though other simulations – like the grand ensemble – are most likely more realistic.”