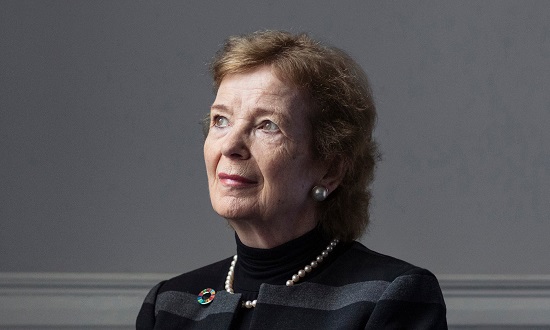 A chronological listing of news articles posted on the Skeptical Science Facebook Page during the past week including numerous articles about the IPPC’s Special Report,

Mary Robinson on climate change: ‘Feeling “This is too big for me” is no use to anybody’

The former president of Ireland has a new raison d’être: saving the planet. Yet, despite the dire warnings of this week’s IPCC report, she is surprisingly upbeat

‘Human rights has always been a struggle’ … Mary Robinson in her office in Dublin. Photograph: Johnny Savage/Guardian

On the morning that the world’s leading climate scientists warn that the planet has until 2030 to avert a global warming catastrophe, Mary Robinson appears suitably sombre. She wears black shoes, black trousers and a black sweater and perches at the end of a long table at her climate justice foundation, headquartered in an austere, imposing Georgian building opposite Trinity College Dublin. The only dash of brightness is a multicoloured brooch on her lapel. “It symbolises the sustainable development goals,” she says. “It’s the one good emblem that the United Nations has produced, so I like to wear it.”

There seems little reason for cheer on this Monday. The landmark report by the UN Intergovernmental Panel on Climate Change (IPCC) has just warned that urgent, unprecedented changes are needed to keep global warming to a maximum of 1.5C; even half a degree beyond this will significantly worsen the risks of drought, floods, extreme heat and poverty for hundreds of millions of people. Donald Trump, rejecter of the Paris climate agreement, is riding high on the back of Brett Kavanaugh’s elevation to the US supreme court. Britain and the EU are consumed by Brexit Brazil is on course to elect a president who wants to open the Amazon to agribusiness. Closer to home, the Irish government is flunking its climate policy goals. Now, climate scientists warn that the clock ticks ever closer to midnight.

“Governments are not responding at all adequately to the stark reality that the IPCC is pointing to: that we have about 11 years to make really significant change,” says Robinson, sitting ramrod straight, all business. “This report is extraordinarily important, because it’s telling us that 2 degrees is not safe. It’s beyond safe. Therefore, we have to work much, much harder to stay at 1.5 degrees. I’ve seen what 1 degree is doing in more vulnerable countries … villages are having to move, there’s slippage, there’s seawater incursion.”

Robinson sips a glass of water and sighs. “We’re in a bumpy time. We’re in a bad political cycle, particularly because the United States is not only not giving leadership, but is being disruptive of multilateralism and is encouraging populism in other countries.”

This could be the start of a depressing interview that concludes we should hitch a ride on Virgin Galactic’s first trip to space and try to stay there. But it turns out to be surprisingly upbeat. Despite the headlines, Robinson, who served as the UN secretary general’s special envoy on climate change after serving as the president of Ireland and the UN high commission for human rights, is hopeful.

She has anticipated the IPCC report by writing a book-cum-manifesto, Climate Justice: Hope, Resilience and the Fight for a Sustainable Future, published this week. It tells stories of farmers and activists, mostly women, who tackle climate change in Africa, Asia and the Americas. They are examples of positive change that Robinson thinks can help turn the tide.

“I don’t think as a human race that we can be so stupid that we can’t face an existential threat together and find a common humanity and solidarity to respond to it. Because we do have the capacity and the means to do it – if we have the political will.”

Mary Robinson on climate change: ‘Feeling “This is too big for me” is no use to anybody’ by Rory Carroll, Science, Guardian, Oct 12, 2018