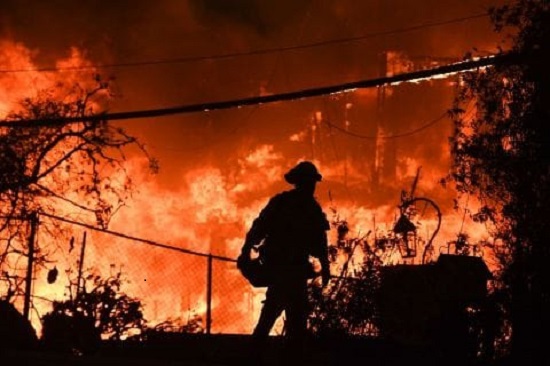 A chronological listing of news articles posted on the Skeptical Science Facebook Page during the past week, i.e., Sunday, Dec 2 through Saturday, Dec. 8

Can 2018’s extreme weather persuade skeptics that the climate is changing?

A firefighter is silhouetted by a burning home along Pacific Coast Highway (Highway 1) during the Woolsey Fire in Malibu, Calif., on Nov. 9. (Robyn Beck/AFP/Getty Images)

Monstrous weather events have crowded 2018. While many coastal residents in the East were still recovering from Hurricanes Florence and Michael, raging fires in California killed a record number of people and destroyed thousands of structures. Climate change has worsened the dry and hot climate in the West, directly contributing to more frequent and severe wildfires. The Fourth National Climate Assessment, which the U.S. government recently released, states that extreme weather events will intensify and become more frequent.

How do these disasters affect people’s perceptions of climate change?

To those already convinced by climate change science, extreme weather events are evidence that it’s already changing our world. Climate skeptics, however, do not always see the link, as when President Trump insisted that the California wildfires resulted from poor forest management, not climate change.