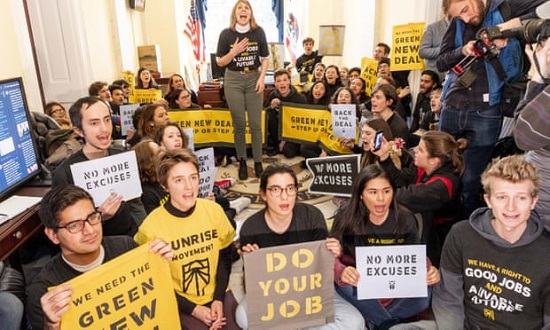 A chronological listing of news articles posted on the Skeptical Science Facebook Page during the past week, i.e., Sun, Dec 23 through Sat, Dec 30

Green New Deal: what is the progressive plan, and is it technically possible?

Most US voters would support a “Green New Deal”, for the country to transform its infrastructure with a rapid shift to clean energy. But while the idea is gaining attention on Capitol Hill, it lacks key political support.

According to a survey from the Yale Climate Change Communicationprogram, 81% of voters backed its description of a Green New Deal.

Similar plans vary in detail, but all are inspired by the New Deal that Franklin Delano Roosevelt launched to battle the effects of the Great Depression. The idea was central to the high-profile campaign of Alexandria Ocasio-Cortez, the young Democratic socialist from New York who won a US House seat in November. Ocasio-Cortez and the youth-led Sunrise Movement are encouraging Democrats, who will retake the House majority in January, to produce a blueprint.

Their Green New Deal would center around creating new jobs and lessening inequality. Aiming to virtually eliminate US greenhouse gas pollution in a decade, it would be radical compared with other climate proposals. It would require massive government spending.

But Nancy Pelosi, Democrats’ nominee to run the House, has not agreed to direct a select committee on climate change to focus on the strategy.

Green New Deal: what is the progressive plan, and is it technically possible? by Emily Holden, Environment, Guardian, Dec 29, 2018