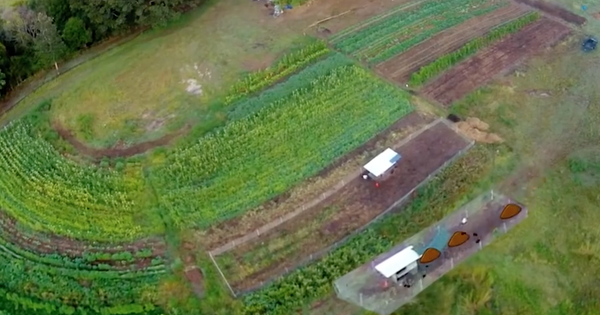 It’s a not uncommon argument in environmental circles to hear that animal husbandry is inherently inefficient. After all, when you feed animals on grains and other food that could instead go to feed humans, you inevitably end up losing calories and expending more energy than you otherwise would for the same amount of plant-based food.

There’s a lot to be said for that argument. And Lloyd certainly seemed convinced by George Monbiot’s recent arguments in favor of (near) veganism.

But many permaculturists have a slightly different view: If animals are treated as part of a holistic landscape, using resources that would otherwise go to waste, and if we make sure we use every possible output from those animals—not just meat, eggs and dairy—but poop and even their natural scratching behaviors, then surely they can help us be more, not less, efficient?

That’s the idea behind systems like the chicken tractor. Essentially a movable chicken coop that’s used to till soil and spread “fertilizer” (aka poop) around a farm, the chicken tractor treats chickens as part of the overall system. In the version demonstrated by Geoff Lawton in the video below, the chickens aren’t fed grain at all—but rather food scraps from local restaurants, which the chickens peck at and incorporate into a mulch mixture, creating high quality compost exactly where it is needed.

Of course, for many people the idea of confining and utilizing animals for our own uses is inherently unethical. And in that case, I doubt the chicken tractor does much to dissuade them. For the rest of us, however, this surely makes more sense than your average factory farm?