The Yale Program on Climate Change Communication published the findings of its 2016 survey on American public opinion about climate change. The results are interesting – in some ways confusing – and yet they reveal surprisingly broad support for action to address climate change. The Yale team created a tool with which the results can be broken down by state, congressional district, or county to drill down into the geographic differences in Americans’ climate beliefs.

Acceptance of science despite confusion about expert consensus

The first survey questions asked about participants’ beliefs about whether climate change is happening, what’s causing it, what scientists think, and whether they trust climate scientists. Overall, 70% of Americans realize that global warming is happening, while just 12% said it’s not. A majority of Americans in every state answered the question correctly, ranging from 60% in West Virginia to 77% in New York and 84% in Washington DC. Drilling down to a more local level, majorities in every congressional district and nearly every county in America were aware of the reality of global warming.

But when asked whether most scientists think global warming is happening, Americans got a failing grade. Just 49% correctly answered ‘yes,’ while 28% believed there’s a lot of disagreement among scientists. In reality, even 95% of weathercasters – who are among the most doubtful groups of scientists about human-caused global warming – realize that climate change is happening. This shows that the campaign to cast doubt on the expert consensus on global warming has been remarkably successful in the US.

Regarding the cause of that global warming, only 53% of Americans correctly answered that it’s caused mostly by human activities, while 32% incorrectly said it’s mostly natural. By state, correct responses varied from 42% in Wyoming to 59% in California and 67% in Washington DC. 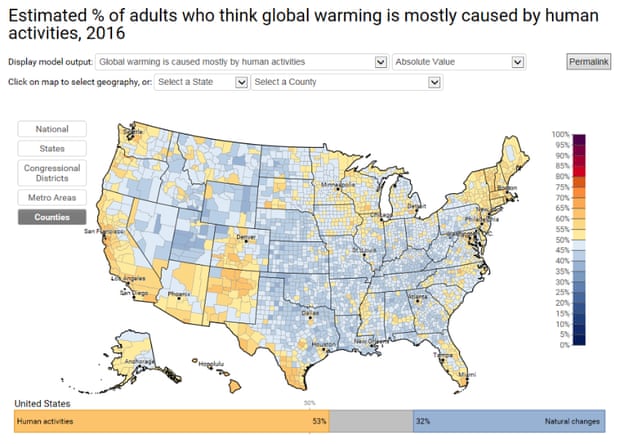 58% of the Americans surveyed said they’re worried about global warming, while 42% aren’t. By state, answers varied from 45% worry in West Virginia to 67% in New York and 74% in Washington DC. Interestingly, even in a coal-heavy state like West Virginia, nearly half of Americans are worried about climate change.

However, Americans displayed wide and broad support for climate solutions. 82% favor funding for renewable energy research; in fact, support was at least 78% in every state. 75% of Americans also support regulating carbon as a pollutant, ranging from 66% support in Wyoming to 81% in New York and 86% in Washington DC. This despite the fact eliminating EPA carbon pollution regulations is currently high on the agenda for House Republicans and the Trump Administration. 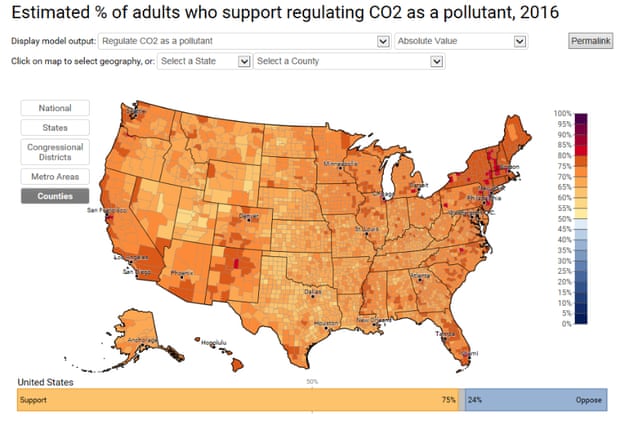 Similarly, a majority of Americans in every state (even coal-heavy states) support setting strict carbon pollution regulations for coal power plants, and requiring utilities to produce 20% of their electricity from renewable sources. Simply put, Americans love clean energy and support taking action to curb carbon pollution. This even holds for Trump voters, 62% whom support carbon taxes, regulations, or both. 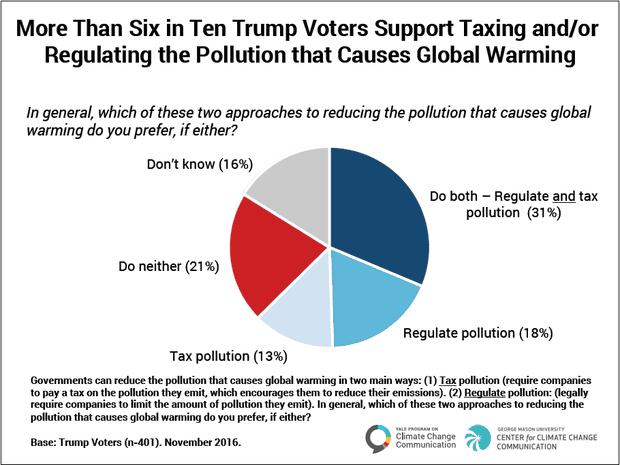 American support for climate action is broad but shallow

The two most important results from this survey are that a strong majority of Americans in every state, county, and congressional district support climate policies, but relatively few are worried about climate change ever hurting them personally. In short, because Americans view climate change as a problem distant in time and space, they don’t consider it an urgent problem or high priority, and thus they don’t penalize politicians who take actions to undermine the climate policies that American voters support.