Home News Carbon Brief Analysis: The climate papers most featured in the media in 2017 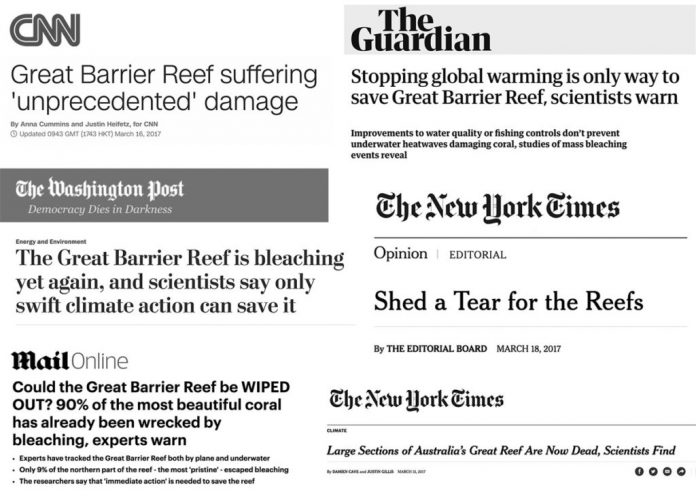 Analysis: The climate papers most featured in the media in 2017

Every day, dozens of scientific journals publish new climate change research that is shared across the world via the internet.

These journal papers make headlines in news articles and on blog pages, they pop up in Twitter timelines and on Facebook. But which ones make the biggest impression? Which have been shared and reported most widely?

Carbon Brief has compiled its annual list of the 25 most talked-about climate change-related papers of 2017. The infographic above shows which ones made it into the Top 10.

Our analysis is based on the data collected by Altmetric, which tracks and scores journal papers by the number of times they’re mentioned in online news articles and on social media platforms. (You can read more about how the Altmetric scoring system works in an earlier article.)

The most widely reported and shared article related to climate change last year as actually a “Policy Forum” commentary in the journal Science. Published in mid-January, “The irreversible momentum of clean energy” was covered by 232 news articles and tweeted more than 9,000 times. It’s overall Altmetric score of 7,872 means it is the highest ranked of any article published last year.

This is no surprise, perhaps, considering the author was Barack Obama, who, at the time, was still the US president. But as the article is a commentary, it does not make it into Carbon Brief’s leaderboard of research papers.

Instead, first place goes to, “Global warming and recurrent mass bleaching of corals”, a Nature paper published in March, with a score of 3,166.

The study, led by Prof Terry Hughes of the ARC Centre of Excellence for Coral Reef Studies in Australia, assessed the impact of coral bleaching events in 1998, 2002 and 2016 on the Great Barrier Reef. As Carbon Brief reported, the study concluded that “immediate action to curb future warming” is essential if coral reefs are to survive. 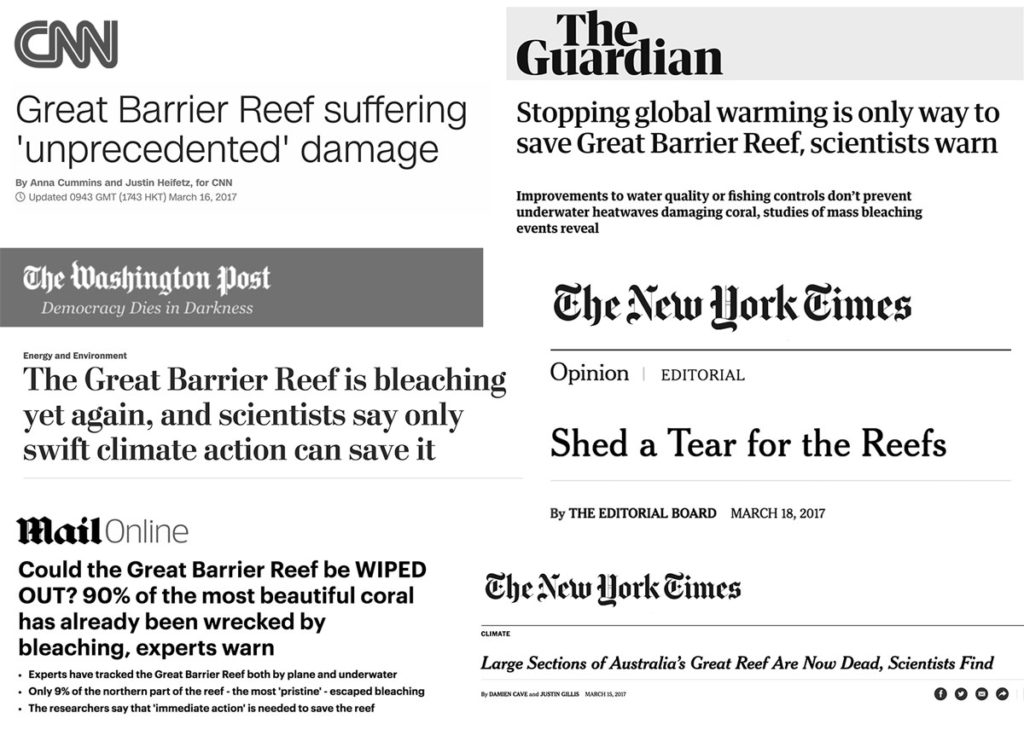 This paper was the 30th most talked about of all journal articles published last year. It was picked up by 395 news stories in 245 outlets – including the Guardian, Washington Post, CNN, MailOnline and the New York Times (both as a news article and in an editorial). It was also referenced in 1,806 tweets – more than any other paper in our Top 25 – 47 blog posts and on 27 public Facebook pages.

Coming second is, “Biological annihilation via the ongoing sixth mass extinction signaled by vertebrate population losses and declines”, published in the Proceedings of the National Academy of Sciences of the United States of America (or “PNAS” for short) with an Altmetric score of 2,845.

The study, led by Dr Gerardo Ceballos of the National Autonomous University of Mexico, found that the Earth’s “sixth mass extinction” is well underway and has “proceeded further than most assume”.

Analysing nearly half of the Earth’s known vertebrate species, the researchers concluded that “habitat loss, overexploitation, invasive organisms, pollution, toxification, and more recently climate disruption” have led to “catastrophic declines in both the numbers and sizes of populations of both common and rare vertebrate species”.

The paper was tweeted 1,583 times and covered by 269 news stories, including in the Atlantic, Sun, Guardian, USA Today, CNN and the Washington Post. It was also posted on 96 Facebook pages, giving the paper the highest score for Facebook of any in the Top 25.

Taking third place with a score of 2,614 is the Nature Climate Change paper, “Global risk of deadly heat”, by lead author Dr Camilo Mora from the University of Hawai’i.

As Carbon Brief reported back in June, the study suggested that up to three quarters of the world’s population could be at risk from deadly heat extremes by the end of the century if global greenhouse gas emissions are not curbed.

The research garnered headlines in 244 news stories from 191 outlets, including Le Monde, the Independent, Der Spiegel and the Huffington Post – and an editorial in Nature. It was tweeted 1,220 times and posted 49 times on Facebook.

The study also appears to have been quoted frequently in later news articles on heatwaves, such as these pieces in the MailOnline, Business Insider and Vice. 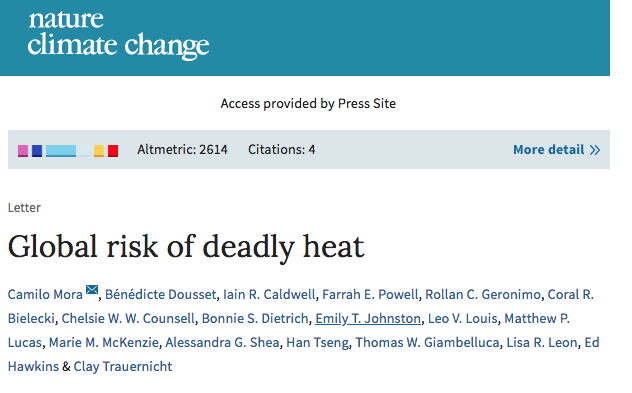 Completing the Top 5 are, “Estimating economic damage from climate change in the United States”, in Science, by lead author Dr Solomon Hsiang of the University of California at Berkeley, and, “Widespread Biological Response to Rapid Warming on the Antarctic Peninsula”, in Current Biology, led by Dr Matt Amesbury of the University of Exeter.

The latter study generated the same number of news stories at the first placed paper (395), but was tweeted just 147 times – the third lowest total of the Top 25. Interestingly, the Altmetric scores of both papers are more than 2,000, which would have put them second place in Carbon Brief’s 2016 list and first in the 2015 one.

Elsewhere in the Top 10

As Carbon Brief reported at the time, the study found that National Oceanic and Atmospheric Administration’s (NOAA) most recent dataset matched Hausather’s record closely, and that the other datasets underestimated recent warming.

While the study generated a substantial amount of news coverage when it was published, it received a subsequent bounce when NOAA’s SST record became the centre of an alleged “whistleblower” article in the Mail on Sunday, which accused NOAA of manipulating climate data to show more warming in recent years.

As Hausfather explained in a guest post for Carbon Brief, NOAA’s data had been independently verified by his Science Advances study and the Mail on Sunday’s piece “in no way changes our understanding of modern warming or our best estimates of recent rates of warming”.

Multiple responses to the Mail on Sunday article brought another flurry of news articles, including in the Washington Post, New York Times and, ironically, in an Associated Press article that was reposted by the MailOnline.

(The Independent Press Standards Organisation subsequently ruled that the Mail on Sunday article was “significantly misleading” and required the newspaper to publish a correction.)

The study, coming in seventh place, found that ExxonMobil contributed to advancing climate science through its scientific publications, while simultaneously promoting doubt in paid, editorial-style advertisements in the New York Times. The conclusion that ExxonMobil “misled the general public” on climate change was reported in many major news outlets.

Completing the Top 10 is, “Less than 2C warming by 2100 unlikely”, in Nature Climate Change by lead author Prof Adrian E Raftery from the University of Washington.

The study used statistical forecasts to show there is a 5% chance of keeping global warming to less than 2C above pre-industrial levels this century – and just 1% of staying below 1.5C. This stark conclusion was reported in 185 news articles last year.

As our list of the most talked about climate papers in 2017 comprises 25 articles, here are a few honourable mentions of those that fall outside the Top 10.

In 11th place is, “The Lancet Countdown on health and climate change: from 25 years of inaction to a global transformation for public health”, published – unsurprisingly – in the Lancet.

The paper is from a Lancet project involving 24 academic institutions and intergovernmental organisations from across the world. It will release a report tracking progress on climate change and global health every year, of which this is the first.

As Carbon Brief reported from the study’s press conference, the authors said the effect of climate change on human health is now so severe that it should be considered “the major threat of the 21st century”.

Landing in 12th is, “Increased light, moderate, and severe clear-air turbulence in response to climate change”, in Advances in Atmospheric Sciences.

The study’s author, Prof Paul Williams from the University of Reading, wrote Carbon Brief a guest article on his research. Williams described how severe air turbulence “is set to become twice or even three times as common by the latter half of the century”.

Interestingly, two other papers on climate change and air travel also appear in the Top 25 – “The impacts of rising temperatures on aircraft takeoff performance”, in Climatic Change in 18th place and, “Global Response of Clear-Air Turbulence to Climate Change”, in Geophysical Research Letters in 25th. The latter is a follow up to Williams’s study in 12th place.

Carbon budget: A carbon budget is the maximum amount of carbon that can be released into the atmosphere while keeping a reasonable chance of staying below a given temperature rise. The Intergovernmental Panel on Climate Change (IPCC) first adopted the concept of carbon budgets in its 2013 report. Budgets are typically expressed in gigatonnes of carbon (GtC) or carbon dioxide (GtCO2). To convert the former to the latter, multiply by 3.67.

Carbon budget: A carbon budget is the maximum amount of carbon that can be released into the atmosphere while keeping a reasonable chance of staying below a given temperature rise. The Intergovernmental Panel on… Read More

In 13th place is, “Emission budgets and pathways consistent with limiting warming to 1.5C”, published in Nature Geoscience, which estimated the remaining carbon budget for holding global temperature rise to no more than 1.5C above pre-industrial levels.

In a Carbon Brief guest post, lead author Dr Richard Millar from the University of Oxford explained the study’s findings that “we have a little more breathing space than previously thought to achieve the 1.5C limit”.

The paper caused quite a stir, with parts of the media claiming that climate models – the basis for carbon budget estimates – have overstated the observed warming of the planet. Carbon Brief factchecked these claims. The authors also published their own response in a follow-up guest article.

Twenty-third place goes to, “Influence of high-latitude atmospheric circulation changes on summertime Arctic sea ice”, in Nature Climate Change. As Carbon Brief reported when the paper was published in March, the study found that rising greenhouse gas emissions are responsible for at least half, possibly up to two-thirds, of the decline in summer sea ice in the Arctic since the late 1970s – with the remaining contribution a result of natural fluctuations.

And just sneaking in to the Top 25 is, “Coupling of pollination services and coffee suitability under climate change”, in PNAS in 24th place.

As Carbon Brief reported in September, the study warns that the Latin American coffee industry faces losses in suitable farmland and declines in important bee species – which play a key role in pollinating coffee plants – as a result of future climate change.

If you want a closer look at the final scores, we’ve compiled all the data for the Top 25 climate papers of 2017 in this spreadsheet.

Finally, a look at which journals the Top 25 papers were published in shows that Nature comes out on top with four, followed by Nature Climate Change and Science Advances with three each.

As the chart above shows, there is quite a spread of different journals – 15 in total, compared to 11 last year. And while the 2016 list had six papers each in the Top 25 for the journals Science and Nature Climate Change, the placings are shared more evenly across the journals in 2017.