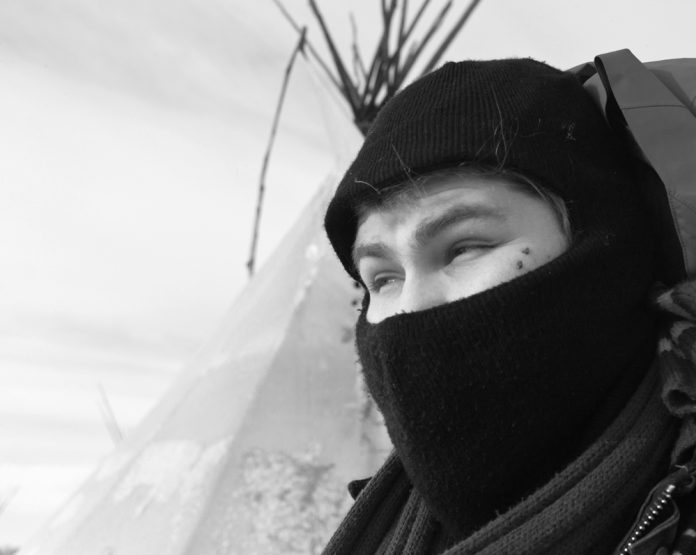 Two young Arapaho from Wyoming have left the Standing Rock camp at the Dakota Access Pipeline vowing to carry on their fight for pure water.

They will travel to Washington to join other Native Americans in a protest march Friday. Upon their return, they plan to organize youths on the Wind River Reservation and other reservations as part of the movement to defend the rights of indigenous people and say they will challenge other pipeline projects.

Siblings Micah and MyKennah Lott returned to Riverton after police cleared out the Oceti Sakowin camp about two weeks ago. They had spent about six months at the camp on North Dakota’s Cannon Ball River trying to halt construction of the pipeline under the Missouri River’s Lake Oahe. Each was arrested twice in the campaign that uses the slogan Mni Wiconi, Lakota for water is life.

Tribal members contend the pipeline was approved without meaningful consultation with them, desecrates sacred sites, and could pollute the water supply of the Standing Rock Sioux Reservation. Pipeline builders say the possibility of a leak is remote, that they secured necessary permits and completed required archeology.

Although the tribes’ fight against the pipeline failed to stop construction, the two activists said they will pursue their campaign by seeking to invigorate other tribal youths to take action to defend treaty rights, including the right to clean water.

“We’re going to be talking around here and try to get something — a water protectors’ chapter started on the Wind River Reservation,” said Micah Lott, also known as Big Wind. He and MyKennah, Little Wind, are preparing to join the  Rise With Standing Rock Native Nations March to be held in Washington on Friday.

Read WyoFile’s December story about the siblings at Standing Rock

They face misdemeanor charges ranging from trespassing, resisting arrest and engaging in a riot to obstructing a government function. Little Wind was first arrested on Columbus Day, also called Indigenous People’s Day, but won’t face trial until at least next month. She was arrested again while escorting a photographer to Turtle Island, a landmark near the camp, early this year.

Big Wind said he was first arrested earlier this year while escorting an older woman to a new campsite that fellow “water protectors” were seeking to establish. “She said that’s what brought me here,” he said of the assembly she sought to join, “so I’m going to go up there.”

His second arrest, at gunpoint, came about two weeks ago as police and national guard troops cleared out the Oceti Sakowin camp that had been home to thousands.

For the two Arapaho, the six months at the camp inculcated them with a sense of mission. “It’s a different way of life when you’re camping out, especially in winter, in a 30-below blizzard,” Big Wind said. “I had never done anything like that. I’m not an outdoors person.

“During winter, we got to know each other,” he said. “We got to see how we could work together. Because of all the ceremonies going on, I’ve never felt more welcome in a place. I felt more at home when Oceti was in its prime than my actual reservation.”

Despite the difficulty of living in a tipi, Big Wind said he kept a vow. “I told my family I would be there ‘til the end,’” he said. “I felt like I needed closure. I needed to be there the last day.”

When police raided Oceti Sakowin, they arrested him. Social media images show him being arrested at gunpoint carrying what he said was a prayer bundle containing sacred medicines, including tobacco, sweetgrass and sage.

Micah Lott, who goes by the name Big Wind, stayed at the Oceti Sakowin Camp near the Standing Rock Indian Reservation until the the camp disbanded. His tipi was his winter quarters where he flew the Arapaho flag and worked with camp security. (Angus M. Thuermer Jr./WyoFile)

“They had real guns,” he said. “They were pointing them at us. I put that prayer bundle right in front of me to protect me. I closed my eyes until they arrested me.”

Because of the Fort Laramie Treaty, “I wasn’t trespassing,” Big Wind said, but had a right to be on the land in question.

Little Wind was with California photographer Valerie Saidman when police arrested her in January for the second time, she said. Saidman’s photographs show Little Wind collecting trash, then venturing toward a razor-wire enclosure on a hill — Turtle Island. Police then zoomed up in a vehicle, Little Wind said.

“We came here to pray on the water,” she said she told them. “You should be protecting me.”

Trials appear to be far down the road

“There is no description of any behavior that would be construed as tumultuous or violent conduct,” a court brief filed by her lawyer says. The prosecutor says Little Wind “was present as a participating member of the … group of rioters who was arrested for the criminal trespass … and for engaging in the riotous behavior that led to the issuance of the criminal citations.”

The siblings said before the police raid, they were trying to clean up the Oceti Sakowin camp that had become a mess after snow melted and various campers abandoned their tents or structures. But they couldn’t get the job done.

Big Wind sees the defeat at Standing Rock as a lesson that will harden activists like himself and keep the Mni Wiconi movement alive. “If we had ‘won,’ then I think things would have been lost [from] the movement,” he said. “I know that this [is a] small battle where we’re taking a loss — it might hurt now, but it was much needed.”

The two will go to D.C. “to show that they can’t break our spirit by separating us and displacing us and have us lose momentum,” Little Wind said. She will march to “show them that the water protectors are still there and we still care.”

Big Wind will continue with a “Rezpect our Water Tour” after Washington, hoping to spread word among youth in other reservations. Among his messages; The country is witnessing “the privatization of clean water,” he said.

“We have a hard time getting clean water now,” he said. People should think of how difficult it will be to get clean water in seven generations — the time his culture teaches him to look toward and plan for.

“That’s why I’m going to continue fighting this,” he said. “I feel everyone should be fighting to make sure they are getting clean water.

“It was good for me and my sister to be out there,” he said of the half year at Oceti Sakowin. “We need more Arapaho people on the front lines.”