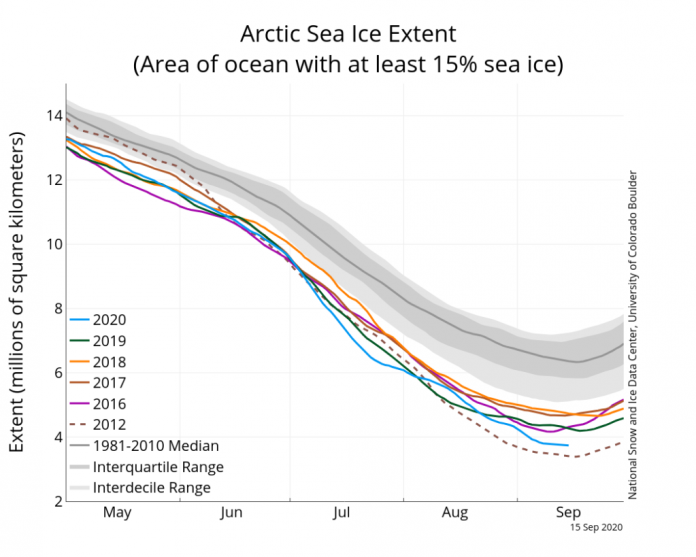 Each year, Arctic sea ice goes through a seasonal cycle, growing in area and thickness through the cooler winter months before shrinking back again as temperatures rise in the spring and summer.

The point at the end of summer when sea ice reaches its lowest level for the year – typically in September – is known as the “sea ice summer minimum”.

This year, the Arctic has reached its second lowest summer minimum on record, according to provisional data from the National Snow and Ice Data Center (NSIDC), which is based at the University of Colorado Boulder.

Including this year’s data, the 14 smallest summer minimum extents in the satellite record have all occurred in the past 14 years.

The data reinforces the finding that “we are entering a ‘new Arctic’ with reduced sea ice and warmer temperatures”, a scientist tells Carbon Brief.

Scientists have been tracking the daily changes in Arctic sea ice cover using satellites in a continuous record that stretches back to the late seventies.

The annual sea ice minimum and maximum – when sea ice reaches its highest level for the year – serve as an indicator of how the Arctic is changing as the climate warms.

Arctic sea ice hit its winter maximum of 15.05m km2 – the 11th smallest on record – on 5 March. It has since been on its annual decline through the melt season of spring and summer.

Around this time of year, Arctic sea ice stops melting and starts to increase again as northern hemisphere temperatures drop off. This low point is the annual summer minimum.

The NSIDC’s provisional estimate for the 2020 summer low is 3.74m km2, putting it second lowest in the satellite record. (The announcement notes that there’s a chance that “changing winds or late-season melt could still reduce the Arctic ice extent” further.)

The chart below shows Arctic sea ice extent on 15 September, 2020 (blue) along with several other recent years and the record minimum set in 2012.

On the map, light blue shading indicates the region where ice occurred in both 2012 and 2020, while white and medium blue areas show ice cover unique to 2012 and to 2020, respectively.

Last year’s summer minimum was also the second-lowest on record at the time (tied with 2016), coming in at 4.15m km2. And the preceding years have seen summer minima among the smallest on record, including the sixth lowest in 2018, eighth in 2017, fourth in 2015 and sixth in 2014.

The melt season began with a near-average pace of sea ice decline, the NSIDC says. Both April and May recorded the fourth-smallest average extent on record for those months.

In May, the sea ice extent was “notably below average in the Barents and Chukchi Seas”, the NSDIC said at the time, but “less so than in recent years”.

A map of the Arctic Ocean. Credit: NSIDC.

The first half of the year also saw “unusually warm” conditions across western Russia, noted the NSIDC. This heatwave over Siberia became international news, with a new (provisional) record maximum daily temperature of 38C for the Arctic Circle recorded in the Russian town of Verkhoyansk.

Research by the World Weather Attribution research group found that the unusual heat over Siberia during the first half of the year, as well as the new record, would have been “almost impossible” without human-caused climate change.

This warmth had knock-on impacts for sea ice, with the earliest retreat of ice from Russia’s Arctic coastline on record, explains Dr Zack Labe, a postdoctoral researcher at Colorado State University. He tells Carbon Brief:

“In particular, the Laptev Sea observed record low sea ice in July and August due to the anomalous warmth and southerly winds. This record early decline of sea ice led to sea surface temperatures rising to more than 5C above average in parts of the Kara and Laptev Seas.”

Overall, June’s average extent for the Arctic was the third-lowest on record for the month. By mid-July, Arctic sea ice extent was down to 7.51m km2 – tracking at the lowest on record for the time of year. The Northern Sea route – a shipping passage along Russia’s northern coastline – was “nearly open” at the time, the NSIDC says. The route being ice-free in the second half of July was the “earliest in the year” in some data records, the NSIDC notes.

The fast pace of ice loss petered out towards the end of July as “the retreating ice edge approached areas of higher-concentration ice that does not melt out as readily”, the NSIDC explains. Nonetheless, the average extent for the month – 7.28m km2 – still clocked in as the lowest on record.

A contributing factor was a “powerful Arctic cyclone” in late July that “led to a fracturing of sea ice along the Pacific side of the Arctic”, notes Labe. The storm was partly responsible for “rapid declines in Chukchi sea ice and a poleward retreat of the sea ice edge”, he adds.

Such was the rate of ice loss that some scientists hinted that 2020 could surpass 2012 for a new record summer low. However, a slowing decline in August meant that, by the middle of the month, projections suggested that a summer minimum of less than 4m km2 was unlikely.

This was followed by a “sharp downward turn” in sea ice during the first week of September, says the NSIDC, which exceeded “the pace of decline for any previous year during that period”.

As the section above shows, while 2020’s sea ice minimum is not itself a record, this summer has been a record-breaking one in many other ways.

For example, the extent of sea ice in the central Arctic is the lowest ever observed, says Labe, which is “an important statistic and another sign of the rapidly changing Arctic”.

These records are “in line with the long-term climate trends in the Arctic”, says Labe, which show that “climate change is impacting the Arctic during all months of the year”.

These impacts come as “no surprise at all”, he adds:

“Climate models have shown for decades that the Arctic would warm faster than the global average. Summer 2020 is a clear example of the effects of climate change on the Arctic. Without a large-scale reduction in greenhouse gas emissions, the first ‘ice-free’ summer will grow increasingly more likely in the next few decades.”

(Late last year, Carbon Brief published an in-depth interactive article on when the Arctic could see its first ice-free summer.)

Another very low minimum sea ice extent “is part of a systemic Arctic climate transition, driven by human activity, in which changes that used to be considered extreme are not becoming routine”, says Dr Marika Holland, a senior sea ice scientist at the University Corporation for Atmospheric Research (UCAR). She tells Carbon Brief:

“We are entering a ‘new Arctic’ with reduced sea ice and warmer temperatures, with repercussions that are felt throughout the Arctic and beyond.”