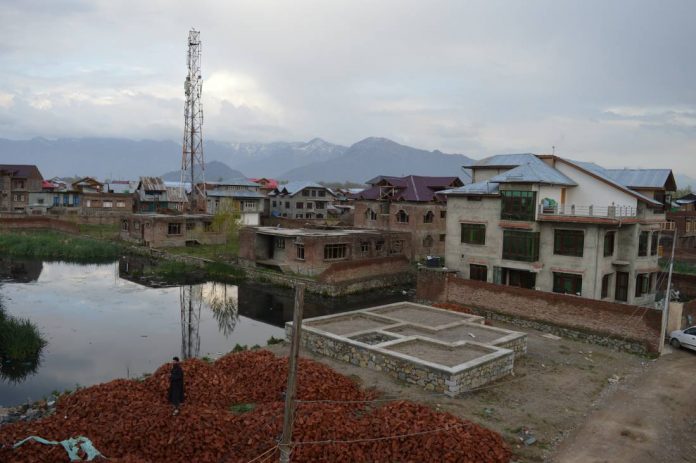 House-building in Indian-administered Kashmir has put people at higher risk of floods, and made region more reliant on food imports

SRINAGAR, India, April 24 (Thomson Reuters Foundation) – Until a few years ago, Mohammad Sultan Parray and his fellow villagers in Zainakote had no shortage of places to fish.

They could choose from a network of tiny streams threading through swathes of agricultural land in the Hokersar wetland, just 10 km (8 miles) north of Srinagar, the summer capital of Indian-administered Kashmir.

But almost all the land has now been converted to residential housing.

“It has been happening since the 1980s when we were teenagers, and has entirely changed our surroundings,” he said.

By Parray’s reckoning, since 1989 some 1,300 hectares of cropland surrounding his village have become residential neighbourhoods.

“If we continue to convert our land like this, we will be left with no agricultural land (in) a few years,” said the 57-year-old Parray, who refuses to sell any of his three acres (1.2 hectares).

Srinagar is one of the 100 fastest-growing urban areas in the world, according to a report published in 2011 by the City Mayors Foundation.

But locals and experts say that Kashmiris need to keep their agricultural land to protect Srinagar from flooding, especially as the changing climate has increased the risk of heavy downpours.

They also need the land to reduce their reliance on rice imports and keep rural jobs in the mountainous region where only a third of the land is cultivatable.

Land for growing paddy has shrunk by nearly a third since 2012, with a loss of more than 44,000 hectares, according the Sher-e-Kashmir University of Agricultural Sciences and Technology (SKUAST).

Farmers are taking advantage of soaring land prices which have risen 70 percent in the last 20 years, said the university’s director of research, Mohammad Yousuf Zargar.

“Major conversion of paddy land has been due to economic reasons, and if the trend continues, coupled with the climatic change, we will be 80 percent dependent on imports for meeting our food requirements by the end of this century,” said Zargar.

According to the state government’s latest economic survey, agriculture’s contribution to the state’s gross domestic product has fallen from 28 percent in 2004-2005 to 17 percent in 2014-15.

This has been accompanied by a huge decline in the share of the workforce employed in agriculture, from 85 percent in 1961 to just 28 percent now.

The state’s director of agriculture, Showkat Ahmad Beigh, told the Thomson Reuters Foundation: “We are working on an agricultural policy which can help save our agricultural land.”

Parray’s neighbour, Abdul Qayoom, said that farmers find it difficult to continue paddy cultivation on land adjacent to or surrounded by residential houses.

“If one or two farmers decide to sell off their land to builders, other farmers whose land borders that land also feel inclined to sell that land off, because they believe that raising of infrastructure around their land will make it uncultivable,” Qayoom said.

Peerzada Mohammad Amin, head of the sociology department at Kashmir University, said that development has happened in part to relieve congestion in the centre of the old city.

Another reason is the migration of rural Kashmiris to Srinagar to take advantage of the better infrastructure and amenities, and to avoid the conflict that began in the late 1980s when Kashmiri youth revolted against Indian rule over the state.

Several laws, the most recent of which was passed in 2010, prohibit the conversion of agricultural land for non-agricultural uses, but critics say they are not enforced.

“People mostly keep their paddy land idle (fallow) for two or three years and get it declared Banjar-e-Kaddem (uncultivable land) by revenue officials, before selling it off for residential or commercial use,” said Sajjad Hassan Baba, an agricultural economist at SKUAST.

In Pandach, Sultan Mir and two of his neighbours recalled the vivid green of paddies and wetland in their youth, when what is now a suburb of Srinagar was just a small village.

“Houses have come up everywhere, and most of the remaining land here has been sold off,” said the 69-year-old Mir, adding that 0.05 hectares of land now costs the equivalent of around $190,000.

According to a study by Kashmir University’s geography department, between 1901 and 2011 Srinagar’s population grew 12-fold, and it is now 23 times as large in terms of area.

The massive urban expansion has left people vulnerable to flooding, because more than half the water bodies in Srinagar and its suburbs disappeared during the past century, according to Kashmir’s Department of Ecology, Environment and Remote Sensing.

In September 2014, the worst floods the state had seen in six decades killed 200 people and affected more than 2 million across the region.

“These water bodies used to be the flood basins in the past and would save the Srinagar city from flooding. But now, if it rains for only a couple of days, people start worrying about flooding,” said Shakil Romshoo, head of the earth sciences department at Kashmir University.

Romshoo said that farmers sell their land not only to make money quickly, but also because the changing climate has changed rainfall patterns, resulting in frequent droughts – as well as heavy downpours. This has increased their uncertainty about the availability of water in the future.

Only 40 percent of Kashmir’s agricultural land has irrigation facilities, so many rice paddies are particularly vulnerable to water shortages.

Some farmers convert their paddy to apple orchards, which require far less water and can bring more profit. In February the government announced a scheme to subsidise farmers planting high-density apple orchards.

“This is going to have a devastating impact on our food security. Rice is our staple food and is eaten by 100 percent of our population. How can we afford to stop growing rice?” Romshoo said.

Baba, at SKUAST, is sceptical that the new scheme can work.

“When farmers try to make orchards out of the land suited for paddy, the apple trees get diseases like root-rot because of more water content in the soil,” he said.

Most farmers who sell off land try instead start their own small businesses, such as buying passenger vehicles or selling goods, Baba added.

“Some do it for social reasons as well. One farmer told me that he sold off his one-acre land because he had to marry off his two daughters.” (Reporting by Athar Parvaiz; Editing by James Baer and Alex Whiting.; Please credit the Thomson Reuters Foundation, the charitable arm of Thomson Reuters, that covers humanitarian news, climate change, resilience, women’s rights, trafficking and property rights. Visit http://news.trust.org/climate)