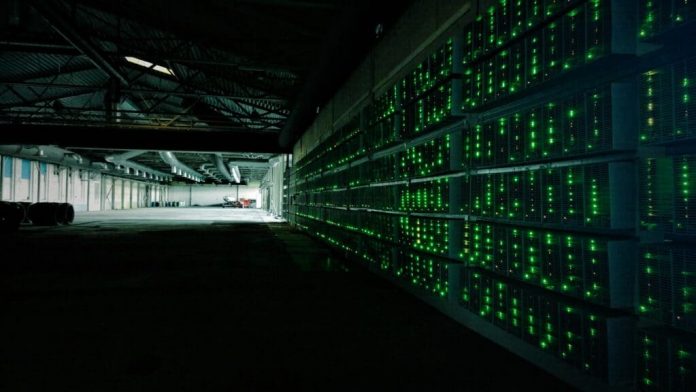 Flaring — or the burning of stranded natural gas directly at an oil well — is one of the drilling industry’s most notorious problems, often condemned as a pointlessly polluting waste of billions of dollars and trillions of cubic feet of natural gas.

In early March, oil giant ExxonMobil signed up to meet the World Bank’s “zero routine flaring by 2030” goal (a plan that — when you look just a bit closer — doesn’t entirely eliminate flaring but instead reduces “absolute flaring and methane emissions” by 60 to 70 percent.)

How does ExxonMobil plan to reach that goal? In part, it turns out, by burning stranded natural gas directly at its oil wells — not in towering flares, but down in mobile cryptocurrency mines.

Roughly speaking, crypto miners compete with each other to solve complex puzzles. Those puzzles, designed to require enormous computing power, can be used to help make a given coin more secure. Successful miners are rewarded for their efforts with newly generated coins.

Using the energy-intensive process of crypto mining to fight pollution is the latest in a wave of claimed climate “solutions” whose environmental benefits seem to only appear if you squint at them from very specific angles — like “low carbon” oil, measured not by the oil’s actual carbon content but by how much more carbon was spent to obtain it.

Critics point out that replacing flaring with mining crypto could become a way for fossil fuel producers to spin money directly from energy, polluting the climate without heating people’s homes or transporting people from place to place in the process. “In terms of productive value, I would say there is none,” Jacob Silverman, a staff writer at the New Republic, said in a recent interview. “The main value of cryptocurrency is as a tool for speculation. People are trying to get rich.”

That, of course, includes oil drillers. “This is the best gift the oil and gas industry could’ve gotten,” Adam Ortolf, a crypto mining executive, told CNBC. “They were leaving a lot of hydrocarbons on the table, but now, they’re no longer limited by geography to sell energy.”

Using crypto mining to sponge up unused natural gas could carry environmental benefits, for example, if you compare that option against flaring that gas and using other supplies of natural gas to mine that same crypto. But, in reality, there are a lot of other moving pieces at play, including calls for cryptocurrency to start lowering its energy demand.

Bitcoin, in fact, has grown so energy intensive that tech industry insiders have begun openly discussing the ways that it’s causing a “climate crisis.”

“If we produce a technology that consumes that much energy,” he added, “wow, that’s not okay.”

Meanwhile, oil giants like Exxon have begun increasingly eying cryptocurrency mining — which could directly connect the world’s biggest producers of fossil fuels to an industry with an ever-expanding appetite for energy.

A pilot project in North Dakota’s Bakken shale has already allowed ExxonMobil to steer up to 18 million cubic feet of gas a month into bitcoin mining ventures in 2021, Bloomberg reported last week, adding that the oil giant is considering expanding cryptocurrency mining pilots into Alaska, Germany, the Qua Iboe Terminal in Nigeria, the Vaca Muerta shale in Argentina, and Guyana — a small South American country that ExxonMobil pushed into the ranks of the top ten gas-flaring countries in 2020.

And Exxon is hardly alone. ConocoPhillips has also launched a Bakken shale pilot program. The two are founding members of the OOC Oil & Gas Blockchain Consortium, whose members also include Chevron, Equinor, Hess, Pioneer, and others. Russia also recently announced that it would accept bitcoin as payment for fossil fuels and crypto mining companies have described talks with officials from Saudi Arabia and other major oil producers.

The crypto mining company working with Exxon says it’s “on a mission to eliminate the routine flaring of natural gas by providing oil and gas companies with a fast, low cost and simple solution to stranded gas.”

At a time when energy markets are already in upheaval due to the war in Ukraine, the drive to use gas directly at the wellhead pits cryptocurrency miners against other potential users of flare gas, like buyers who’d be able to purchase that gas if drillers connected those oil wells to gas gathering lines and processing plants. The oil and gas industry’s backers have used fear of supply shortages to push for more fossil fuel production in the United States — a strategy that, of course, assumes that fuel could be delivered to buyers.

The justifications offered for gas flaring are often economic, with companies commonly arguing that it’s too expensive and financially burdensome to connect oil wells to gas pipelines or to process gas in remote oilfields. “Flaring is also used to burn gases that would otherwise present a safety problem,” the environmental group Earthworks notes, adding that flaring and venting unburned gas both “pollute our air, contribute to climate change, deprive states and individuals of revenue and waste the recovered resource.”

But regulators seem to have previously managed to drive down flaring in some areas without relying heavily on crypto.

Back in 2013, the state of North Dakota found itself embroiled in a fossil fuel scandal so glaring it was literally visible from outer space. Amid the sudden fracking frenzy in the Bakken shale, drillers seeking oil were burning off the natural gas that also came from shale wells at astounding rates, igniting flares that left North Dakota’s remote fields more brightly lit than major cities on the East Coast in nighttime satellite images.

By January 2014, drillers were burning off 36 percent of the gas produced in the state right at the wellhead, Energy Information Administration (EIA) data showed. In the years since, regulators have steadily driven that percentage down, with the EIA more recently reporting that 7.5 percent of North Dakota’s gas production was flared in the first three quarters of 2021.

That’s in part because the oil industry expanded its capacity to process gas from oil wells and to pipe it away to be burned by consumers. The state’s gas processing capacity more than tripled from 2013 to 2020, the Journal of Petroleum Technology reports.

Flaring remains an issue in the Bakken — it is, after all, the place where Exxon’s pilot program launched last year. But the prior reductions do illustrate that gas that’s stranded today won’t necessarily be stranded tomorrow.

Meanwhile, crypto carries its own controversies — not just its enormous appetite for energy, which is notoriously larger than many countries’ — but also concerns about some currency’s stability and even risks that crypto might pose to broader financial systems.

The cryptocurrency world is awash in open pump-and-dump schemes, or coordinated efforts to temporarily drive up prices just before selling off, for example, and some observers have warned about cryptocurrency’s reliance on so-called “stablecoins,” designed to back crypto coins with other assets and encourage confidence in their worth.

Stablecoins “are not yet subject to consistent regulatory safeguards — meaning they pose an elevated risk to consumers and might even threaten the stability of the financial system,” Nellie Liang, the Treasury Department’s undersecretary for domestic finance wrote in a March 6 op-ed in the Washington Post.

The market value of all cryptocurrencies hit $2.3 trillion, the New York Times reported in December, adding that the price of one Bitcoin rose from $7,000 at the start of 2020 to roughly $50,000 near the end of 2021. Cryptocurrencies have also grown increasingly mainstream, with one 2021 Pew survey finding that 1 in 3 Americans aged 18 to 29 say they’ve used crypto and a handful of companies advertising cryptocurrencies during the Super Bowl this year.

For a way to store abstract wealth, Bitcoin’s real-world energy demand to date has been stunning. The University of Cambridge’s Cambridge Bitcoin Electricity Consumption Index estimates that, all told, Bitcoin has already consumed about 310 terawatt-hours of electricity, with the coin’s cumulative demand for power rising on an exponential curve over the past decade or so. (To put that in context, the entire United States used about 3,800 terawatt-hours in 2020, according to Statista). The crypto industry’s own estimates are lower, with one company, CoinShares, publishing estimates of about 89 terawatt-hours and concluding that Bitcoin caused a little less than one percent of the world’s carbon emissions in 2021.

Of course, Bitcoin and other cryptocurrencies don’t always rely on fossil fuels. Estimates for how much of Bitcoin’s power comes from renewable energy at a given time can vary widely and reflect rapid changes, from as low as 25 percent to as high as 73 percent.

Bitcoin mining is designed to grow more complex over time. While the first Bitcoins were mined on a home computer, over time, competitive miners have shifted from using PC graphics cards to buying up entire power plants and filling warehouses and airplane hangars with processors.

But it’s not clear that Bitcoin and other cryptocurrencies need to use that much energy — especially looking forward. Environmental groups launched a “Change the Code” campaign this week aiming to drive down Bitcoin’s energy consumption. They’re calling on Bitcoin to change its software code from a so-called “proof of work” authentication system to a “proof of stake” system that they say could slash Bitcoin’s energy demand instantly.

“We need to clean up our industry,” Chris Larsen, chairman of Ripple, a company that uses blockchain technology, said in support of Change the Code. “And the issue is not, as some have suggested, powering bitcoin with clean energy. We need the limited supply of clean energy for other vital uses. The issue is changing the code to use far less energy. That’s the environmentally responsible way forward.”

One of Bitcoin’s key competitors, Ethereum, is already making that switch, Change the Code, points out. “No matter how you feel about bitcoin,” added Greenpeace USA Chief Program Officer Tefere Gebre, “pushing those with the power to ensure a code change will make our planet and communities safer from the destructive impacts of climate change.”

The post As Oil Giants Turn to Bitcoin Mining, Some Spin Burning Fossil Fuels for Cryptocurrency as a Climate Solution appeared first on DeSmog.