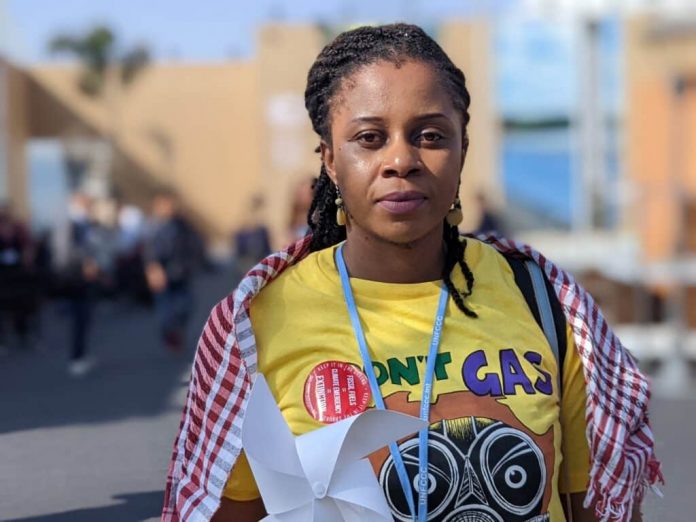 German, Italian and other companies have been scouring Africa for alternatives to Russian supplies in the wake of the February invasion of Ukraine, raising fears that new projects will lock Africa into long-term dependence on fossil fuels.

At least nine gas deals have been struck so far on the sidelines of the negotiations – known as COP27 – five involving Africa. In the run-up to the summit, Egypt signed a memorandum of understanding with Germany to expand liquefied natural gas (LNG) export capacity by 2050. Last week, Tanzania committed to a $40 billion LNG deal with Equinor and Shell, while Germany and the United States agreed to finance Egyptian renewables to “free up” gas for export.

“European companies should not be here in Africa,” said Dean Bhekumuzi Bhebhe, a South Africa-based campaigner for the Don’t Gas Africa coalition of advocacy groups, which rallied dozens of protesters in a designated space at the tightly-marshalled venue in the resort of Sharm el-Sheikh on Tuesday.

“They should back off,” Bhebhe added.

German Chancellor Olaf Scholz visited Senegal in May to back the development of a gas field due to go onstream in 2023, while Italy has struck gas deals with Angola, Algeria and the Republic of Congo. European Union officials have opened talks with the Nigerian government to increase flows of fossil fuels into Europe, according to a report by Don’t Gas Africa.

“This is basically another scramble for Africa,” Koaile Monaheng, a consulting associate at Power Shift Africa, a Nairobi-based energy and climate think tank, told DeSmog. “The energy and petroleum ministers are misinformed because they view Russia, the Ukraine war and this idea of energy insecurity in Europe as an opportunity to now pillage the resources.”

The role of natural gas is a contested topic at the talks, where African delegates have emphasised the disproportionate impact of climate-fuelled droughts, heatwaves and floods on a continent that accounts for 3.8 percent of global greenhouse gas emissions.

“Nowhere has suffered more from the impact of burning fossil fuels so it is perfectly placed to show the world a different path to develop, freed from the shackles of a dirty energy system that has wrecked our climate,” said Joab Okanda, pan-African advocacy advisor at Christian Aid.

“What’s so galling is that 89 percent of the liquified natural gas infrastructure being built in Africa is to export to Europe to bail them out of their addiction to Russian gas. We cannot be Europe’s gas station. Otherwise we will crash the climate,” Okanda said.

European governments and African producers have sought to portray natural gas as a climate-friendly fuel – despite findings by scientists that new fossil fuel developments will make it impossible to fulfil the 2015 Paris Agreement to avoid catastrophic climate change.

“International oil companies and governments are working closely together, and they’re actually thinking that there’s a common voice,” Power Shift Africa’s Monaheng said. “The African energy ministers think that this is their plan, this is their strategy, but in the biggest scheme of things, this is actually Europe’s plan.”

Campaigners point out that sub-Saharan natural gas exporters such as Nigeria, Angola and Equatorial Guinea have failed for decades to leverage their reserves to tackle chronic electricity shortages, while income from fossil fuels has fuelled rampant corruption.

“People are dying in Africa because of Europe’s use of gas,” said Kwami Kpondzo, a Don’t Gas Africa campaigner from Friends of the Earth Togo, who joined today’s rally, where protesters chanted “Don’t gas Africa.”

Lorraine Chiponda, co-facilitator at Don’t Gas Africa, urged heavily polluting nations to meet demands from African countries to pay reparations for the “loss and damage” caused by the climate crisis by financing investments in renewable energy.

“The solution for African people is to invest in renewable energy, which can be deployed to the 600 million people living in energy poverty,” Chiponda told DeSmog at the protest. “We are not begging, but we are appealing to the consciences of polluting nations to pay for the damage that they’ve caused.”

The post “Back Off”: African Climate Groups Decry Europe’s Dash for Gas at COP27  appeared first on DeSmog.