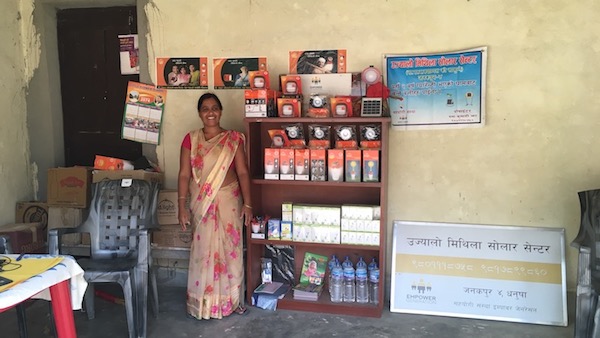 “People talk here when a woman talks to men. They say things like how a woman should not leave the house,” says Runa Jha, a solar entrepreneur in Janakpur, eastern Nepal. “But I don’t care.”

A widow, Jha lives in one room with her three teenage children. In rural Nepal, widows are treated as social outcasts. They are seen as predatory, potential husband-stealers and their interactions with men are frowned upon.

“You should do what you want,” says Jha, who received training from Empower Generation – an NGO that on Thursday will be awarded a £20,000 Ashden award for promoting the role of women and girls in the clean energy sector.

Another Empower-trained solar entrepreneur, Lalita Choudhary, also faced cultural barriers. “Individuals are going to say all sorts of things” about business women in rural Nepal, she says. Choudhary lives not too far from Jha, in Lahan, Siraha, just 17km from the Indian border. Most people in the area work in agriculture, growing rice and corn or tending to goats and cows.

In many communities, women “hide their faces and do not talk to men” and “are not really allowed to get a job,” says Abhilahsa Poudel, Empower Generation’s communications coordinator.

But solar power’s effect on village life is inarguable. Its allows for cleaner home environments, with light into the evenings and the ability to charge a mobile phone.

The social benefits that flow from the women-run solar businesses, means that Jha and Choudhary have become admired for their work by both men and women in their communities. “Everyone wants to be like [Choudhary] and to work like her,” says Poudel.

Jha and Choudhary are two of the 23 women that NGO Empower Generation has trained to be renewable energy entrepreneurs, who in turn, employ and manage a further 170 sales agents. Some of the agents are men, but most are aspirational young women, creating a ripple effect of empowerment through sustainable, profitable employment.

“Before, women were not allowed outside the house, and were told not to study as they have to do the housework,” Jha says.

Empower Generation mentors and supports women registering their own businesses to sell solar lanterns, solar home systems, clean cook stoves and water filters. The trainee entrepreneurs are given lessons on climate change and the adverse effects of fossil fuels, becoming leaders in their community for promoting renewable energy and environmental awareness.

Climate Weekly: Sign up for your essential climate news update

As women do not traditionally work in energy, Empower Generation’s work aims to “really move the needle on how women are valued,” and change the rural Nepalese culture of women being considered to be the property of their husband’s families, says Empower Generation co-founder Anya Cherneff.

The “priority is to create bad-ass business women,” says Cherneff.

Since owning and running a solar business, Jha has taken on other leadership roles, including leading a community clean-up group. “I feel like I want to lead now; I like to lead,” says Jha.

Many of the women working with Empower Generation apply their skills and confidence to further business ventures and other arenas of public life. Choudhary is currently running as a candidate in local government elections, and Sita Adhikari, Empower Generation co-founder is now a United Nations adviser.

The Ashden awards ceremony on Thursday will host former US vice-president Al Gore as keynote speaker.

Adhikari said that receiving the award “encourages us to work even harder to cultivate more women entrepreneurs who are providing reliable, affordable clean tech solutions.”