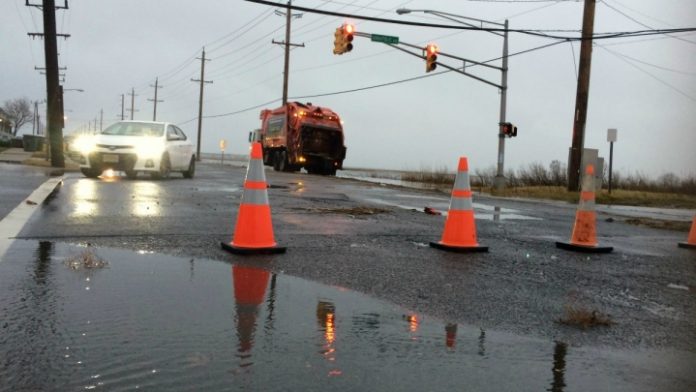 As floodwaters from some of the highest tides of the year spilled this week into cul-de-sacs and avenues from Delaware to Hawaii, federal legislation was introduced to ease the growing toll that rising seas are taking on coastal neighborhoods.

Rep. Carlos Curbelo, a Republican from Florida who champions climate action, joined with Rep. Seth Moulton, a Democrat from Massachusetts, in introducing H.R.2607, a bill to provide $3 billion a year toward projects that improve wetlands and infrastructure to alleviate “frequent and chronic” coastal flooding.

“Although the bill makes no mention of climate change or sea level rise, it’s clear from the language that that’s what its drafters have in mind,” said James DeWeese, a fellow at the Georgetown University Law Center researching climate change adaptation policy. “Flooding is already one of our costliest natural hazards — and climate change is exacerbating the risks.”

Billions of dollars of federal work to reduce flood hazards already focuses heavily on protecting high-value oceanfront property from storm surges. Lower-income neighborhoods built near bays and coastal rivers are being left vulnerable to frequent floods when tides are high.

The new bill could start to tackle this inequity by meeting up to 90 percent of the cost of wetland restoration projects and new and improved floodwalls, dunes, levees and drainage systems — local infrastructure that would help communities tackle their own unique flood threats in different ways.

“It’s safe to say that $3 billion a year is a drop in the ocean compared to the total need, but it’s a step in the right direction,” DeWeese said. “Whether the money leads to smart adaptation choices in the long run is really dependent on how communities decide to spend the money.”

Floods that block roads, damage property and sometimes enter homes are called nuisance floods. Their economic and psychological impacts are difficult to assess but appear to be vast. They can strike during storms, but also occur on calm and sunny days.

A Climate Central analysis this month projected rapid rises in risks for 90 U.S. cities with flat landscapes, such as Atlantic City, N.J., and San Mateo, Calif. Research by the Union of Concerned Scientists has warned that nuisance floods could be striking Washington and other major cities once every three days on average within 30 years — the typical life of a mortgage. 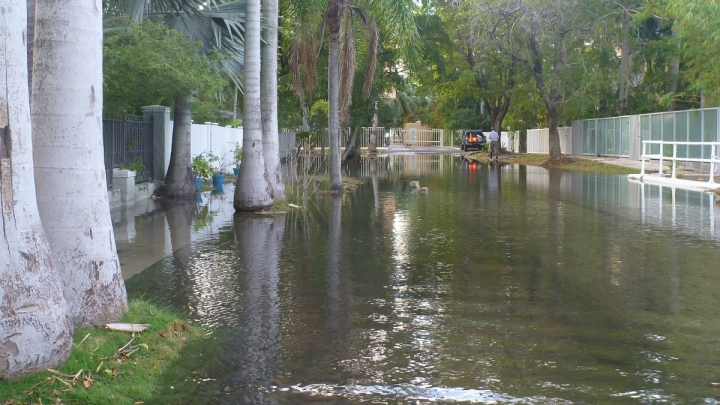 Tides pushed higher by the combined effects of climate change, a new moon and springtime conditions have been spilling into low-lying neighborhoods around the country this week. These tides are colloquially called king tides.

“This time of year we tend to see an uptick in some of the seasonal tides,” said William Sweet, a National Oceanic and Atmospheric Administration oceanographer. “In some cases the tide alone will be sufficient to cause some minor coastal flooding.”

Coastal experts weary of seeing nuisance flooding overlooked by the federal government welcomed the bill, characterizing its introduction alone as a positive sign, even if it doesn’t become law.

“It’s great to see members of Congress specifically recognizing chronic flooding and the toll it takes on communities,” said Kristina Dahl, an independent scientist who helped produce the recent Union of Concerned Scientists study. “That feels like a huge step forward.”

While the legislation would help fund options for defending property from rising seas, it doesn’t include any provisions to help residents abandon vulnerable areas and move to safer ground. Nor does it provide planning support for local governments, helping them make zoning decisions to reduce building on land where flooding will inevitably get worse.

Seas will continue to rise at a hastening pace in the years and decades ahead, even if immediate steps are taken to reduce greenhouse gas pollution.

“Many of the communities that will be grappling with chronic inundation in the next 20 years will ultimately need to be considering retreat,” Dahl said. “Rather than wait for a big storm to cause catastrophic flooding of these homes, this bill could potentially address retreat and relocation at the individual home level.”

The bill is being introduced at a tumultuous time in Washington. The embattled Trump administration is proposing steep spending cuts to federal programs — including the elimination next year of $70 million a year in coastal management grants that support similar flood-reduction efforts.

When the administration first proposed slashing funds like these, coastal states and leaders successfully united to push back fiercely. Coastal communities traverse political lines, home to rich and poor, conservative and liberal, from Louisiana to Oregon to Wisconsin and New York.

“Flood protection should be a bipartisan concern,” Rep. Curbelo spokesperson Joanna Rodriguez said. “We hope to garner and continue building support from areas across the country that are most at risk.”

The $3 billion a year in coastal spending proposed in the new bill may go only a small way to meeting the high costs of flood control projects needed nationwide, but it “absolutely would be a game-changing amount,” said Grant Williams, a government affairs official with the Coastal States Organization, which represents coastal states.

“It’s definitely something that we think is a step in the right direction,” Williams said. “There’s a need out there, especially when you start getting down into the local level.”