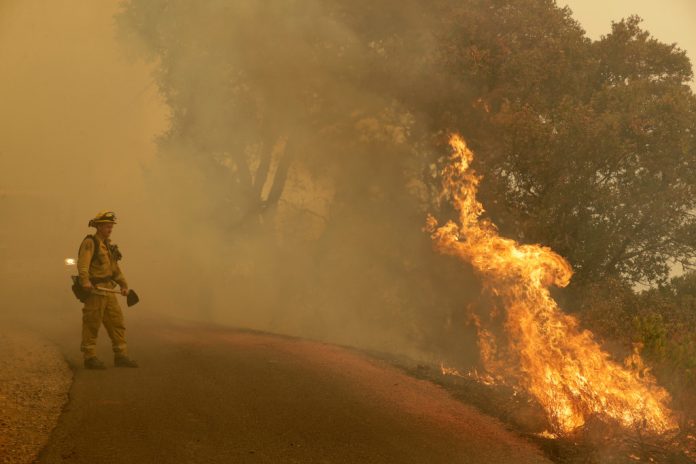 WASHINGTON — As wildfires rage across California and the West, Democratic and Republican senators have joined forces to help rural communities better prepare for and prevent catastrophic wildfires.

A bill introduced Thursday by senators from three Northwestern states would authorize more than $100 million to help at-risk communities prevent wildfires and create a pilot program to cut down trees in the most fire-prone areas.

Under a streamlined approval process, forest managers would “thin” pine forests near populated areas and do controlled burns in remote regions. The bill also calls for detailed reviews of any wildfire that burns over 100,000 acres.

Sen. Maria Cantwell of Washington state said the bill would “create new tools to reduce fire risk and help better protect our communities,” especially those in the Northwest near fire-prone pine forests.

Cantwell, top Democrat on the Energy and Natural Resources Committee, co-sponsored the bill with Democrats Patty Murray of Washington state, Ron Wyden of Oregon and Republicans Jim Risch and Mike Crapo of Idaho.

Risch, who also serves on the natural resources panel, said the nation needs to “actively manage our forests to reduce the fuel available for fires to burn.”

The bipartisan bill is a compromise between Republicans eager to make it easier for federal land managers to thin overgrown woodlands and Democrats dubious of allowing timber companies greater access to harvest federally owned forests.

The bill comes as lawmakers from both parties push to rework a federal funding formula that makes it hard for officials to budget for extreme wildfire seasons such as the one ravaging the West this year. The formula ties spending to a 10-year average for wildfires even as fires burn longer and hotter each year and forces officials to tap money meant for prevention programs to fight wildfires.

Western lawmakers are seeking to ensure that Congress includes a fix to the “fire borrowing” problem in disaster-aid legislation being considered in the wake of Hurricanes Harvey, Irma and Maria.

“Congress must continue to pursue efforts aimed at reducing the risk and severity of wildfires and end the ‘fire borrowing’ that takes funds from other Forest Service maintenance priorities,” Crapo said.

A $36.5 billion disaster aid bill passed by the House includes nearly $577 million to fight wildfires, but does not address the fire-borrowing issue.

The forest-management bill won praise from a range of timber industry, firefighting and conservation groups, including the National Wildlife Federation, the American Forest Resource Council and the International Association of Fire Chiefs.