In late 2013, my mother went into a hospice for the final time. Her illness had reached a stage where little more could be done. I had to face the fact that she was going to die, and soon, when for the preceding few years of palliative care, there was no urgency to come to terms with that still inescapable truth. Now it had hit me. It was like a hammer-blow.

I mention this experience because, upon reading the Technical Summary of AR6, I had a vividly similar feeling. Here’s a brief quote from page 11 of that summary:

“Levels of global warming that have not been seen in millions of years could be reached by 2300, depending on the emissions pathway that is followed. For example, there is medium confidence that, by 2300, an intermediate scenario used in the report leads to global surface temperatures of 2.3°C–4.6°C higher than 1850–1900, similar to the mid-Pliocene Warm Period (2.5°C–4°C), about 3.2 million years ago, whereas the high CO2 emissions scenario SSP5-8.5 leads to temperatures of 6.6°C–14.1°C by 2300, which overlaps with the Early Eocene Climate Optimum (10°C–18°C), about 50 million years ago.”

But these are all familiar things to regular SkS readers. How many times have SkS authors covered research looking at aspects of Pliocene climate, for example? I know I have on several occasions. Readers and writers alike have long understood that a mid-Pliocene climate will be like nothing modern Homo Sapiens has ever seen. Even with that knowledge, though, for me, seeing it there in writing in AR6 brought the climate crisis into razor-sharp relief: the mess, long foreseen, that we are getting ourselves into.

Yet many people, people who probably don’t read Skeptical Science, seemingly want to carry on as things were, pre-COVID. They want to return to, “normal”, when it is “normal” that is placing us squarely in the path of ever-greater danger. Just how does one get through to people, to get them to understand the need for radical change, in the face of such antipathy? Waving the Technical Summary of AR6 in their faces is just as likely to be counter-productive. 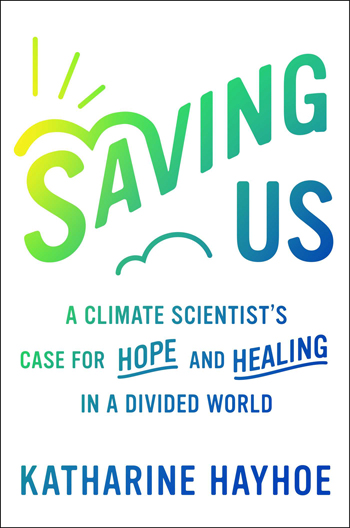 Step forward Katharine Hayhoe with a thoughtful new book, “Saving Us – a climate scientist’s case for hope and healing in a divided world“.

Many of you will be familiar with the name: for those who are not, Katharine is a Canadian-born climate scientist now living in Texas. She is also an Evangelical Christian and furthermore she is one of the best science-communicators we have.

Saving Us is an excellent in-depth primer on climate change in general, understandable to a non-specialist audience even where putting over the complexities of the situation. Such complexities are not just limited to the science but extend to politics and behavioural psychology: the sorts of things that, if they did not exist, there would have been no need for Skeptical Science.

Books appeal to different people for different reasons and the chapters that grabbed me in particular make up Section 2 of the book: Why facts matter – and why they are not enough. This is the area of climate change communication that fascinates me the most, because different approaches clearly work for different people and this is a point we need to recognise to a far greater degree. I have some experience with this idea through promoting my book, The Making of Ynyslas, but here Katharine goes into a wide-ranging discussion of the different ways in which to approach the subject, in some cases among people actively hostile to climate science. I think for anybody with a genuine interest in working in climate science communication, this is absolutely essential reading.

The importance of finding common ground in starting discussions cannot be emphasised enough, as opposed to lecturing people, an approach which might work with the already engaged but here we are talking about the disengaged, sometimes wilfully so. Katharine gives some good examples of this and after reading them, I thought about how it might work in my case and sea-angling came to mind, as it is an activity in which I frequently participate. I might start a climate discussion with a fellow sea-angler by swapping notes on how warm-water fish species are steadfastly extending their range Polewards (they are), or how the seasonal fish movements are changing (they are too), thus affecting catches.

Other conversations will occur to people who engage in other diverse activities but the point applies to many situations: find an area of common ground and work carefully forward from that. That’s a way to engage people and get them thinking about both how the climate is changing and what they might be able to do about that in terms of mitigation and adaptation, for some adaptation will certainly be part of the transition to the future.