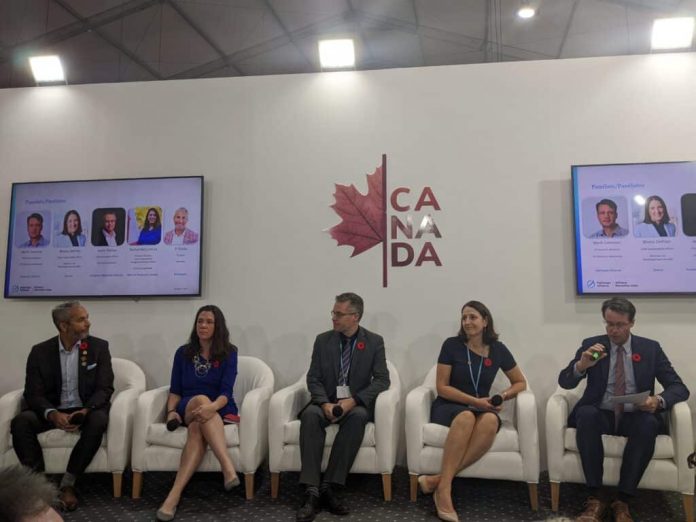 For the past two weeks, delegates from Canada’s tar sands have been spreading a deceptively reassuring message at the United Nations COP27 climate talks in Egypt: the oil and gas producers responsible for causing the climate crisis are also capable of fixing it.

“There’s a recognition that there’s a massive decarbonization challenge ahead of us as Canadians and globally. No one party can do that on their own, we have to be working together,” Kendall Dilling, president of an industry organization known as the Pathways Alliance, told the Canadian Press. Alliance companies, which represent 95 percent of tar sands production, are promising to slash the industry’s annual emissions by 22 million tonnes within the decade.

But a key Pathways Alliance member is telling a much less inspiring story in its communications to investors, according to disclosures reviewed by DeSmog.

Suncor, the top producer in the tar sands and a founding member of the Pathways Alliance, says in those disclosures that even as it attempts to reduce its emissions the company “supports initiatives to gain access to new international markets in the next 5-10 yrs for our crude oil and refined products.”

The Canadian oil and gas giant, which also operates a notoriously polluting oil refinery in Colorado, expresses skepticism about whether “adoption of alternative energy vehicles will accelerate” and assures investors that its climate-harming products are “easily transported into global markets” if oil alternatives take off in North America.

As a result of these fossil fuel expansions, there is a very real chance that Suncor will completely fail to meet the aggressive climate targets that it’s been promoting at COP27 through the Pathways Alliance: “Planned growth projects to meet global energy demand may increase Suncor’s absolute emissions in the next decade.”

And while the Pathways Alliance says it is responding in good faith to decarbonization pressure from green investors — “the financial community is demanding it,” Dilling told Canadian media — Suncor waved off that pressure in its CDP disclosure.

“Notwithstanding the efforts of those few to divest from oil & gas, some new investors have entered oil and gas positions and some remaining investors have been willing to increase their investment in oil and gas, so the net impact on Suncor is negligible at this time,” it says.

Neither Suncor nor the Pathways Alliance responded to a request for comment from DeSmog.

“This is another example of how the oil and gas industry is knowingly lying,” Julia Levin, who has been attending the COP27 talks with the group Environmental Defence, told DeSmog. “They know that their contribution to the climate crisis is only going to increase and they still have the audacity to tell Canadians that they are climate leaders.”

Suncor’s frank admissions are contained in its Climate Change 2022 submission to the Carbon Disclosure Project (CDP), a nonprofit organization that for decades has collected and assessed environmental reporting from thousands of companies across the global economy.

These voluntary disclosures are published on the CDP’s website and they are read by investors and customers who want to learn how specific companies are adjusting their business models to avoid destabilizing the climate.

The tempered enthusiasm for carbon reductions contained in Suncor’s most recent CDP filing stands in contrast to the sweeping claims about decarbonization being made by the Pathways Alliance, whose president Dilling claimed last week at COP27 that “we’re moving aggressively on this.”

The Pathways Alliance is promising delegates to United Nations talks in Sharm el-Sheikh that its members–which in addition to Suncor include Exxon-owned Imperial Oil, Canadian Natural Resources Ltd, Cenovus Energy, MEG Energy, and ConocoPhillips Canada–will capture the carbon emitted from their operations and bury it deep underground. The Alliance claims this will allow the industry to fully eliminate or neutralize the tar sands’ climate impacts by 2050, a state known as “net-zero.”

It was a message repeated during events at the official Canada pavilion — and it was contained in advertisements that delegates to COP27 saw on their phones before downloading programmes at some events: “Canada’s oil sands. Net Zero by 2050.”

But in its CDP filing Suncor was more specific about what that target actually means. It only applies to emissions produced by its oil and gas operations. Those operational emissions represent about 21.4 million tonnes of Suncor’s carbon footprint, according to the disclosure.

Meanwhile the emissions that come from burning the gasoline, diesel and other products Suncor sells are as high as 123 million tonnes, which is roughly three times the entire annual carbon impact of the country of Sweden in 2018. Neither Suncor nor the Pathways Alliance has made any promise to reduce these much more substantial emissions, known as Scope 3 emissions.

Those crucial caveats weren’t part of the Pathways Alliance ads that COP27 delegates saw these past two weeks. But in its disclosures to the CDP, Suncor has a fiduciary responsibility to ensure that investors know the truth about its climate plans.

“That’s why they have to be a lot more honest in these documents,” Keith Stewart, a climate and energy campaigner with Greenpeace Canada, told DeSmog.