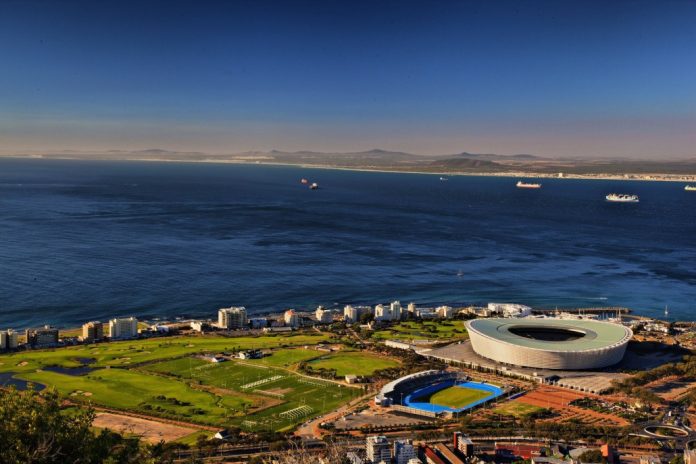 By Brett Walton, Circle of Blue

It’s called Day Zero, the day when the six main reservoirs that supply Cape Town will be drained of water.

For Cape Town and the Western Cape province of South Africa, which enter the dry season after three consecutive years of significantly below-average rainfall, that nightmare scenario is approaching with uncomfortable speed. Without drastic action to conserve or to tap emergency supplies, the region’s leaders warn that Day Zero could come by March.

To avoid that unthinkable reckoning — a major city without running water — Cape Town’s four million residents will be forced to use less. On October 22, city authorities began reducing pressure in the water distribution system, in effect cutting water intermittently to homes and businesses in response to the historic drought that has helped shrink reservoirs to their lowest levels on record. The city aims to whittle household water use to the bare minimum, just 87 liters (23 gallons) per person per day, roughly equal to one 10-minute shower.

“If we don’t pull together now and drive down water usage even further, we face the risk of disrupting the daily lives of our households and businesses,” Richard Bosman, executive director of Safety and Security, wrote in the introduction to the city’s disaster plan, released the first week of October after the national water ministry asked for tighter water restrictions.

“In order to avoid this disruption, everyone in the city will have to endure some discomfort and inconvenience, but this will be better than the alternative, which is extensive disruption at a later point,” Bosman added.

The disruption Bosman and other officials are desperate to avert is a complete shutdown of the city’s reservoir system, which would mean no running water for homes and businesses. Such an event would test any city’s mettle. Cape Town plans to have the police and military guard and distribute fixed amounts of water from wells, functioning taps, tanker trucks, or bottles at collection points scattered across the city. It is an outcome that, while unlikely and assumed to be preventable with intensive conservation, has reached a point of plausibility that leaders opted to impose severe water cuts now.

Such a disruption, and during the height of tourist season, would be an unprecedented wound for a city of Cape Town’s population, economic activity, and international stature.

The local government response, meanwhile, is stirring national political tension. The provincial arm of South Africa’s ruling party, the African National Congress, has called for Cape Town and the Western Cape to be supervised by national ministries for what it claims is an inadequate response to the crisis, News 24 reports. The city and the province are governed by the Democratic Alliance, the opposition party, which failed in August to remove President Jacob Zuma from office through a no-confidence vote in Parliament.

A graph of water stored in Cape Town’s six big reservoirs over the last four years reveals a consistent downward plunge. Total storage this week is 38.5 percent of capacity. Ten percent of total storage, however, is unusable because it lies below the outlet pipes. So 38.5 percent of capacity is more like one-quarter full. One year ago the Big Six reservoirs were at 61 percent. In October 2015, they were more than 72 percent full.

The plunge is due, in part, to a dramatic contraction in supply. A University of Cape Town climate researcher calculated that the amount of rain received in the last three years is likely to occur once in roughly 600 years. Rainfall in the last two years, the driest of the three, has an expected frequency of about once a millennium. The university’s climate analysis group and South Africa’s top science agency agree that a warming planet means drier years in the coming decades for the Western Cape.

Water levels at Cape Town’s six main reservoirs have steadily declined in the last three years during a record drought. Chart via City of Cape Town

Cape Town is the latest major metropolitan area to experience a harsh drought that exposed both the vulnerability and adaptability of megacities in a time of intensifying natural hazards. In 2014 and 2015, the state-run water provider for 20 million people in Sao Paulo, Brazil, had to drop temporary pumps into the Cantareira reservoir to suck water out of the nearly dry lake.

In California, Gov. Jerry Brown ordered a 25 percent reduction in urban water use in 2015 after a winter in which scarcely any snow fell in the Sierra Nevada mountains, which are a primary water source for the 10 million people in Los Angeles County.

Cape Town, for its part, is trying to increase supply by drilling wells and hurrying a number of desalination and water reuse projects. A water plan that Mayor Patricia de Lille introduced in August advertised that the city would acquire 500 megaliters of water from these sources by June 2018, in effect doubling the city’s usable water. A megaliter is one million liters, or 264,000 gallons.

But this week Xanthea Limberg, the City Council member in charge of water said that only one-quarter to one-half of the 500 megaliters is likely to be ready by June, and even then only “if all goes according to plan.” It is a supply-side response similar to the Australian states of Victoria and Queensland, which built multibillion-dollar desalination plants during the country’s string of dry years in the 2000s, known as the Millennium Drought.

Cape Town is moving forward with such facilities but is not counting on them. The disaster plan assumes that no new water sources will become available before the next rainy season. Critics of the local and provincial government response argue that these projects should have been developed earlier and water restrictions put in place sooner.

The Other Half of the Equation

Supply is one thing, but demand — how much water residents choose to use — is the other half of the equation. On this metric, the city earns a passing mark, according to Kristy Carden, a water management researcher at the University of Cape Town’s Future Water Institute.

Water use in last year’s peak months — December through February, or summer in the Southern Hemisphere — was 20 percent lower compared to the previous year. Water demand growth, in general, has flattened since the year 2000, even as Cape Town added one million people.

Still, it is not enough. Mandatory restrictions and other measures — in September the city banned lawn watering and car washing, and raised the price of tap water — have not compelled Cape Town residents to align their consumption habits with official conservation targets. Set in June, the target of 500 megaliters per day was never met and daily demand rarely fell below 600 megaliters.

One reason that the city is struggling to achieve the target is the magnitude of the task, argues Carden.

“Bringing use down to 87 liters is quite an ask,” she told Circle of Blue, noting that during Australia’s Millennium Drought, Brisbane set a target of 140 liters (37 gallons) per person per day.

Water cuts will take place during the morning and evening, daily peak times when people are at home and using showers, toilets, washing machines, and other appliances. Because the city is managing the cuts by reducing water pressure, residents in higher elevation areas and in the upper floors of high rises are more likely to lose water service. Lower water pressure invites the potential for contaminants to be drawn into underground water pipes, but Carden said it’s a risk that the city has to take.

Those households consistently using more water than necessary will be kept on a leash — the city will install a device on the meter that automatically shuts off water to the home once daily use exceeds 350 liters.

With water cuts now in place, city authorities recommend that households store at least five liters for use if the tap is dry. The city’s suggestions for living with rationing include: taking one-minute showers, not flushing after peeing, using less toilet paper, using single-ply toilet paper, and acquiring extra fire extinguishers in case of an emergency when water is off.

The mood in Cape Town, Carden observed, has grown considerably more serious in the last few months as city officials focus public attention on the severity of the water crisis. “We’re in a bit of uncharted territory,” she said.

If periodic cuts do not stem the decline in reservoir levels before the rainy season starts in eight months, Cape Town officials will move to Phase Two of the disaster plan. Commercial areas, densely populated areas at risk of disease outbreaks, and hospitals would receive intermittent tap water service in Phase Two, but “large numbers” of homes and businesses would be cut off — no running water at all — according to the city’s plan.

In this scenario, residents collect water from distribution points set up around the city and supervised by local police, the South African National Defense Force, and the South African Police Service. The amount of water each resident would receive has not been determined.