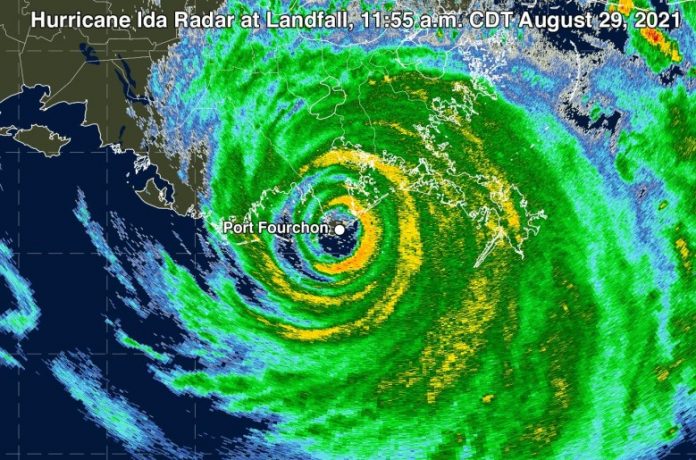 Category 4 Hurricane Ida struck a catastrophic blow on Louisiana, making landfall at the key oil industry hub of Port Fourchon at 11:55 a.m. CDT August 29, with 150 mph winds and a central pressure of 930 mb. Remarkably, today is also the 16th anniversary of Hurricane Katrina’s devastating landfall in Louisiana and Mississippi in 2005. Katrina, the most expensive weather disaster in world history, at $176 billion, caused between 1085 and 1389 deaths.

Only four hurricanes (all Cat 5s) have made landfall in the contiguous U.S. with stronger winds than Ida, and Ida is tied with Laura of 2020 and the 1856 Last Island Hurricane as the strongest ever to hit Louisiana. As measured by central pressure at landfall, Ida ranks as the ninth-strongest to hit the contiguous U.S., and second-strongest to hit Louisiana. Only Hurricane Katrina of 2005, with a 920 mb pressure at landfall near Buras, had a lower pressure.

Ida put on a furious display of rapid intensification overnight, with the pressure dropping from 985mb to 929mb (a fall of 56 mb) in 24 hours. As documented by Sam Lillo (see Tweet below), only nine hurricanes on record in the Atlantic have done this, with Ida being the furthest north, and the one closest to a U.S. landfall. In one 12-hour period, Ida’s pressure fell by a remarkable 40 mb – the third fastest pressure fall observed in a Gulf of Mexico hurricane since 1979. Sea surface temperature of 30-31 degrees Celsius (86-88°F) and the warm Loop Current eddy that Ida passed over were both key factors in its intensification.
At landfall, Ida was undergoing an eyewall replacement cycle (ERC), which halted intensification just before landfall, causing the pressure to rise from 929 mb to 930 mb. The ERC kept the winds at the core from increasing further, but greatly broadened the area experiencing hurricane-force winds. This is overall a bad thing for Louisiana, as it will result in more wind damage.

According to Brian McNoldy, Ida’s Integrated Kinetic Energy (IKE, a measure of the total destructive power of hurricane, based on the size of its wind field) was 36 terajoules (TJ) at 11 a.m. EDT Sunday, an increase of 64% from the 22 TJ it had 24 hours previously. For comparison, Hurricane Katrina’s IKE at landfall was 113 TJ. Thus, Katrina’s surge had a lot more destructive power than Ida’s. However, Ida’s wind damage and fresh water flooding damage will likely exceed that of Katrina – particularly since Ida is hitting a key area of U.S infrastructure.

The most destructive hurricanes for storm surge tend to be both intense and large, as these storms can push vast amounts of water. Such hurricanes can maintain a massive and destructive surge even if they weaken before landfall, as happened with Katrina in 2005 and Sandy in 2013. Ida’s wind field did not expand dramatically until late Saturday, and it was not classified as a major hurricane until 1 a.m. CDT Sunday, just 11 hours before landfall. As a result, the overall storm surge threat from Ida was far less than that from Hurricane Katrina (see note above on integrated kinetic energy).

The greatest storm surge from Ida pushed ashore just east of the center, from Port Fourchon to the mouth of the Mississippi River and northward to the Mississippi border. Lesser but still significant surge extended well east along the Mississippi coast, and storm surge will also be plaguing the complex network of waterways inland across southeast Louisiana, including around New Orleans, on Sunday afternoon. As discussed in our previous post, it appears that New Orleans itself will be protected from a Katrina-level flooding event by its upgraded surge protection system. However, some areas just outside the city will be vulnerable to major surge flooding as Ida moves further inland.

Below are some of the peak surge values observed through 2:30 p.m. CDT Sunday. Higher values can be expected in some locations later on Sunday, especially from New Orleans eastward.

Ida’s eye scored a direct hit on Port Fourchon, a critical hub for the U.S. oil industry. According to the Port Fourchon website:

Over 250 companies utilize Port Fourchon as a base of operation.

In addition to its huge domestic hydrocarbon significance, Port Fourchon is land base for LOOP (Louisiana Offshore Oil Port), which handles 10-15% of the nation’s domestic oil, 10-15% of the nation’s foreign oil, and is connected to 50% of US refining capacity. LOOP is the only US deep water port capable of offloading VLCCs (Very Large Crude Carriers) and ULCCs (Ultra Large Crude Carriers).

Overall, Port Fourchon plays a strategic role in furnishing this country with about 18% of its entire oil supply.

Over 400 large supply vessels traverse the port’s channels each day.

Approximately 15,000 people per month are flown to offshore locations supported by Port Fourchon.

Truck traffic studies have shown that up to 1,200 trucks per day travel in and out of Port Fourchon.

Over 1.5 million barrels of crude oil per day are transported via pipelines through the port.

Ida is likely to cause catastrophic damage to the port, and leave it cut off from the rest of the state as a result of storm surge flooding of Highway 1. Potential serious oil spills in Port Fourchon are also a concern given its numerous tank farms. 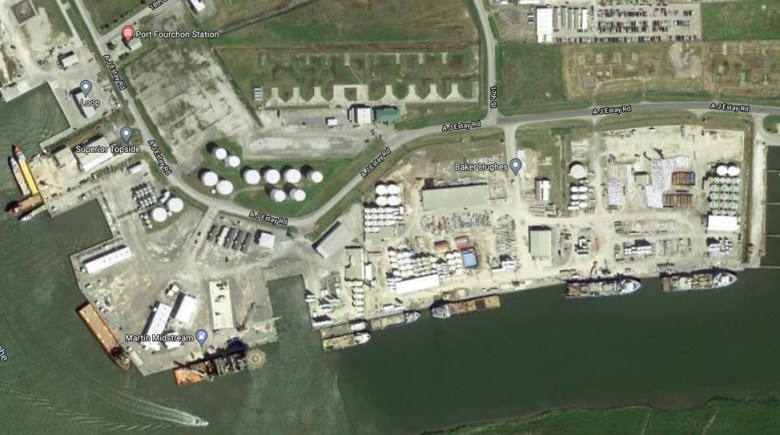 Figure 2. Satellite view of Port Fourchon, Louisiana, from Google. The port has many tank farms vulnerable to causing oil spills from Ida’s impact.

Not only is the industrial corridor home to dozens of key petrochemical sites, and crisscrossed by important pipelines, it also has three of the 15 largest ports in America: the largest bulk cargo port in the world, the Port of South Louisiana, which lies along a 54-mile stretch of the Mississippi River; the nation’s largest export grain port, the Port of New Orleans; and the Port of Greater Baton Rouge, the nation’s 10th-largest port. These three ports handle 55-70% of all U.S. grain exports to the world, supplied by barges moving downriver.

Going upriver, Mississippi River barges transport petrochemicals, fertilizers, and raw materials essential for the functioning of U.S. industry and agriculture, making the Mississippi River the lifeblood of the American economy. If the ports of the Mississippi River are closed for an extended period of time, the entire U.S. economy suffers, with impacts to the global economy and world food supplies. World food prices, vulnerable to extreme weather shocks, in May of 2021 hit their highest levels since 2011. It is very likely that Ida will shut down navigation on the Lower Mississippi River for weeks, and it will take months for shipping traffic to fully recover.

The 2006 report “Case Study of the Transportation Sector’s Response to and Recovery from Hurricanes Katrina and Rita” said that in the wake of Hurricane Katrina in August 2005, the Port of New Orleans was closed for 15 days; the Port of South Louisiana, less damaged, was closed for five days. Barge traffic was severely impacted for many weeks, in part because the hurricane destroyed many U.S. Coast Guard’s navigation aids – the system of buoys, beacons, and lighthouses that facilitate safe navigation. The Coast Guard estimated that some 1,800 aids to navigation were missing, relocated, or destroyed because of Hurricane Katrina. More than 300 barges along the river were set adrift by flood surges and wind, sunk, or significantly damaged, posing further risks to navigation. Expect Ida to have similar impacts to navigation.

Ida one of the top-5 fastest-intensifying hurricanes on record before a U.S. landfall

At 11 a.m. Saturday, Ida had top sustained winds of 85 mph. Just 26 hours later at landfall, those winds were 65 mph higher: 150 mph. Interpolation of Ida’s winds yields a 24-hour intensification before landfall of 55 mph, making Ida the fourth-fastest intensifying hurricane on record before making landfall in the U.S. Historical records show that since 1950, nine storms have intensified by at least 40 mph in the 24 hours before landfall. It is sobering to see five of those storms, below in bold face, occurred in the past five years:

The National Hurricane Center (NHC) minimum qualification for rapid intensification is a 35-mph increase in winds in 24 hours.

With hurricane season not yet half over, Ida is the sixth named storm (and first hurricane) to make landfall in the contiguous U.S. this year. Over the past 16 months, the U.S. has experienced a truly astonishing 17 landfalls by named storms (including Ida). Seven of these landfalls were in Louisiana; four of the state’s landfalls were by hurricanes – three of them major hurricanes (including Ida). In 2020, Louisiana was hit by five named storms, the most ever to make landfall in one season in the state (old record: four in 2002).

The U.S. landfall pace in 2021 is only slightly behind the pace of 2020, when a record 11 named storms make landfall in the contiguous U.S. The sixth landfall of 2020 (Hurricane Laura in Louisiana) occurred on August 27.

Over the 71-year period 1950-2020, the U.S. averaged three landfalling tropical storms (with one being a hurricane) per year, so 2021 already has two average seasons’ worth of landfalling storms. On average, about 60% of the Atlantic’s named storms occur after August 29; the average peak date of the season (September 10) is still 12 days away.