New policies are “urgently” needed to protect homes and landscapes from coastal flooding and erosion in the long term, the Committee on Climate Change (CCC) says.

These coastal risks will increase in the future due to climate change, the committee says in a new report to government. But long-term action can help to manage their impact, it adds.

The current approach to protecting the coastline in England “really isn’t fit for purpose”, Chris Stark, chief executive of the CCC, tells Carbon Brief. “We’re trying to encourage an honest conversation about that.”

England will “almost certainly” have to adapt to at least 1m of sea level rise at some point, the report says. Some model projections indicate that this will happen over the next 80 years – within the lifetime of young people alive today. [Sea levels are expected to rise48cm by 2100 – if global temperature rise are kept to 1.5C above pre-industrial levels].

Rising sea levels will increase the frequency of the most damaging coastal floods, the CCC says, and increase rates of coastal erosion. It adds:

The CCC says these changes must be accounted for in long-term land-use and coastal defence plans. But the public are not clearly informed about current or future risks of coastal erosion and flooding, it says.

The damage caused by the tidal surge and flooding of 6 December 2013 at Hemsby, Norfolk, England. Credit: jon gibbs/Alamy Stock Photo.

There is also a possibility of accelerated ice sheet melt – and, thus, higher sea level rise than 1m – in the absence of more mitigation on climate change, Professor Jim Hall, who leads on flooding and coastal erosion at the CCC, tells Carbon Brief. “What we’re talking about here very much has a global mitigation context,” he says.

The CCC estimates the total value of assets at risk from coastal flooding to be around £120-150bn, though it says this is difficult to quantify.

[All of the UK’s operating nuclear power plants are on the coast; they are responsible for their own coastal defences and, according to Hall, they look a lot further into the future with respect to sea level rise than is typically done for coastal communities.]

The population at risk of coastal flooding could almost quadruple by 2080, according to the CCC’s earlier 2017 risk assessment, as shown in the chart below. 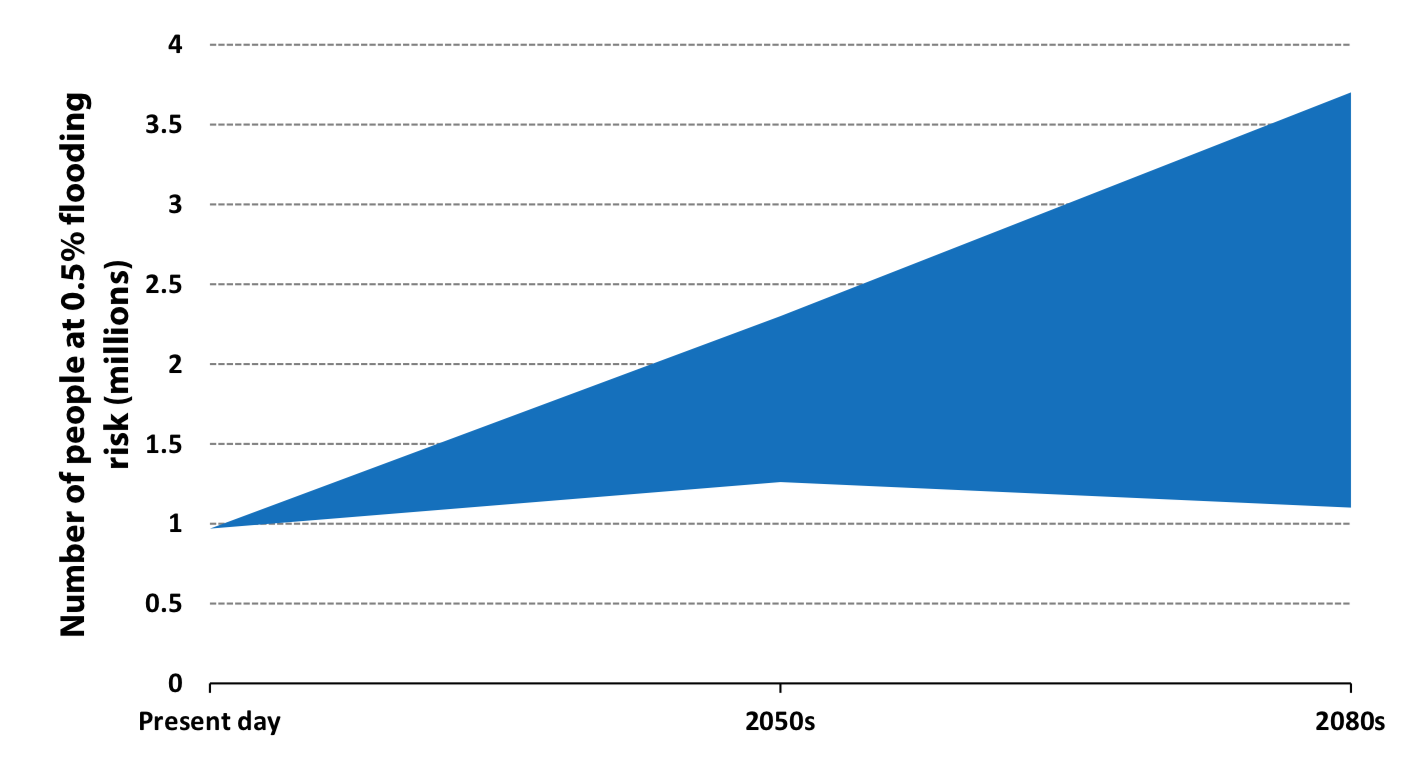 Other research has shown the damage from coastal flooding in the UK could be very high in the absence of upgrades to protection. One Nature Climate Change study found the UK could see up to €236bn in annual damages and 1.1 million people exposed to coastal flooding by 2100. It found the UK to be the worst hit European country by far, although others will also be severely affected.

The CCC notes that the risks of harmful coastal flooding and erosion “cannot be eliminated altogether”. However, stronger actions to reduce greenhouse gas emissions and adapt to climate change could reduce the risk for 400,000-500,000 people in England by 2100, compared to a “baseline” level of climate adaptation, it adds.

Strategic responsibility for overseeing English coast rests with the government’s Environment Agency, Hall tells Carbon Brief. But local authorities also have some responsibility, in particular in areas of coastal erosion.

These two groups work together to develop local Shoreline Management Plans (SMPs), which identify responses to future coastal changes using a 100-year policy framework. They were first developed in the mid-1990s and revised between 2006 and 2011. The map below shows how they are split up into 22 separate areas. 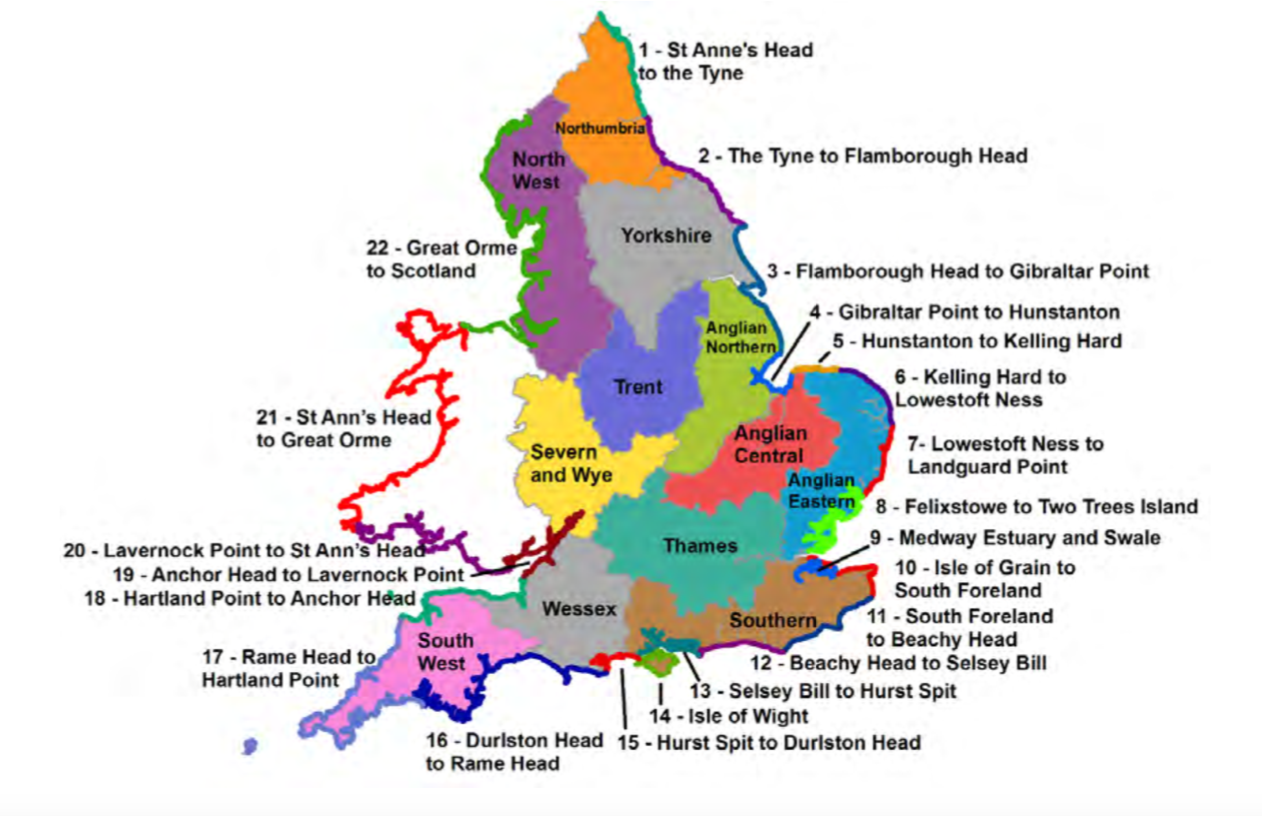 But as they stand, these plans “cannot be relied” on to reduce the risks from coastal flooding and erosion, the CCC says. This is because they are not legally binding and contain unfunded proposals. Implementing current policies to protect England’s coast would cost £18-30bn in total, the CCC adds, depending on the rate of climate change.

Importantly, many of the unfunded coastline protection plans are far less “cost-effective” than the measures funded by government today. Hall says current plans for around 150 kilometres of coastline are not cost-beneficial to implement. This raises the need for honest conversations with those affected about “the difficult choices they face”, he says.

“There genuinely will be homes that it will not be possible to save,” said Baroness Brown, chair of the CCC’s adaptation sub-committee, at a briefing for journalists on the new report. “That’s why we need those discussions, that’s why people need information, so they can take rational decisions about the level of risk they are prepared to take.”

Shoreline Management Plans the core reason why the CCC’s concludes that England’s current approach to protecting the coastline “isn’t fit for purpose” says Stark. “They are non-statutory, they’re unfunded, and they give this kind of illusory protection,” he tells Carbon Brief.

Sustainable coastal adaptation is possible with long-term commitment and proactive steps by the government, Stark says.

The report sets out several ways forward, from simple acknowledgement and communication about changing coastal risks by the relevant authorities to the development of more rigorously implemented local plans. There is also a need for more evidence-based, quantified outcomes, the CCC says, since much of government policy fails to outline actions that can be assessed in terms of their impact on overall exposure or risk.

However, the government will also need to make long-term funding and investment available in the face of coastal risks, the CCC says, including to help affected communities cope with inevitable changes.

This funding needs to be based on a “broader and more inclusive economic case” than is current practice, the report adds, since areas where investment in hard defences is uneconomic tend to lose out. It says:

“[T]hese places also need funding to assist them to adapt to inevitable changes, so whilst hard defences may not be fundable they still need support for a broader package of adaptation actions, including community engagement, asset relocation and compensation to move households where appropriate.”