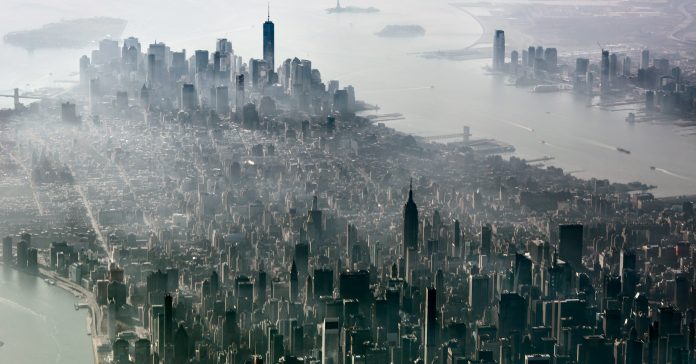 Maybe the United States is sticking with the Paris Climate Agreement? Maybe it isn’t? But even if the US bails out of the international accord to limit climate change, well, nations aren’t the only players. If every city with a population over 100,000 stepped up, they could account for 40 percent of the reductions required.

But that’s no small if. “It requires drastic action in the next three or four years,” says Michael Doust, program director for measurement and planning at C40, a coalition of 90 cities trying to fight climate change. “The decisions city leaders are going to make are really going to set the tone.”

So after last year’s Deadline 2020 report, in which C40 detailed the reductions cities would have to make to keep warming below 1.5 degrees by 2050, many city leaders had one critical question: How? On Monday at “C40 Talks,” part of a series of Climate Week events in New York, C40’s steering group cities announced a step toward an answer, with plans for the leadership team—New York, Paris, Mexico City, Durban, and others—to prepare and share detailed climate roadmaps as a way to spin up everyone else.

The plans themselves aren’t out yet. New York’s was supposed to be ready for Monday’s announcement, but then got postponed. London and Paris’ plans are due to be released in the first half of 2018, with the other cities to follow in the second half.

As much as cities can be alike in size, topography, and economic bracket, in other ways every city is sui generis. So while sharing information is probably the best way to meet Paris reduction goals, it won’t be easy. “Some cities have very few powers, such as Toronto or London. Cities like San Francisco tend to have more power and influence. The biggest lever is often the ability to decarbonize the electrical grid, but in many cases that power rests with the national government,” Doust says. Cities, on the other hand, can often do things like build electric vehicle infrastructure, or enforce more energy efficient building codes.

Meanwhile developing megacities in the global south face different issues than entrenched, practically post-capitalist cities in Europe and North America. Durban and Mexico City’s plans are supposed to show that even growing cities like those can make a difference. If human beings are going to limit warming, everyone’s going to have to make massive cuts in greenhouse gases. Taking the best ideas from other cities and implementing them might be the best route.

Even in advance of the C40 plans, scientists already have some pretty good ideas. The real problem, though, will be knowing if any cities are getting it right. “If all you have is a blunt instrument, you can make some dents. You can do the broad transportation policies that lots of cities do. You can poke at building codes,” says Kevin Gurney, a biogeochemist at Arizona State University who studies urban carbon cycles. “But if you want to go beyond that, you need more information than is typically available.”

Right now, most cities rely on what researchers call “bottom-up” data, estimates made to greater or lesser degrees of accuracy based on stuff like the total number of cars, total miles of road, or amount of heating and cooking oil used. The equations for calculating greenhouse emissions that result are pretty standard. The trick is how good your data is—do you do a new inventory every few months, or have you only done one? Or are you really only downscaling from national data, which tends to be better but hard to make as specific as the scale of a city? Are you just guessing?

Even if you have a handle on predictable emissions, you also have surprises—unpredictable failures of the system. “That would involve things like leaking gas infrastructure, of landfill or waste management sites that aren’t operating as intended,” says Riley Duren, co-principal investigator of the Megacities Carbon Project at the Jet Propulsion Laboratory. “So a general question you could pose is, what dominates the greenhouse gas footprint of a city? Is it normal activity like traffic and heating and local electrical generation, or is it malfunctions and leaks? The answer, almost certainly, is it varies by city.”

That makes it tough to imagine one plan, or even a set of plans, that could apply to a broad class of cities.

Better monitoring could certainly improve bottom-up data. Gurney’s team has actually gotten emissions data at the resolution of individual buildings in four US cities. That kind of street-level analysis is getting cheaper thanks to technological innovations, but is still out of reach for most cities. But understanding the exact locations of emissions hotspots could also translate to more bang-per-buck; it tells policymakers where to focus their efforts.

In a paper that came out earlier this year, a team in Boston mapped emissions at individual intersections using GPS data from cell phones. If you’ve ever driven in Boston you know that it’s a special kind of hell; reducing emissions in just a few choke points would greatly reduce the city’s overall contribution to global warming. “I think currently a lot of the greenhouse gas reporting for cities is bottom-up inventory that doesn’t have independent data that tests how robust the assumptions are,” says Lucy Hutyra, a biogeochemist at Boston University who worked on the cell phone paper. “We are at a point as a community of scientists and practitioners where we’re ready to confront that with data and observations.”

One thing that’ll help even more: “top-down” observations like satellite monitoring of emissions. That’s the kind of data that, combined with bottom-up inventories, could produce models every city could use. “You perhaps could have a database of what drives emissions in all the different types of cities,” Duren says, “so other cities could look at that and say, ‘What applies to me and do I need to make adjustments in my accounting?’”

By coincidence, this week a bunch of people working in this field, including Hutyra and Gurney, are meeting in Washington, DC to figure out models and approaches that’ll be of more use to cities. “While the C40 is releasing climate action plans from those key cities, the scientists are starting to release the nuts and bolts of the models to do some of the same comparisons,” Hutyra says.

That’s good news, because in the end, executability and verifiability will be key. All the pledges and coalitions in the world don’t matter if cities don’t know what they need to do, or can’t do it. Being “Paris-compliant” means more than just setting a goal. “It’s not just a visionary document, but a well thought-through statement that we can have confidence the city will deliver on,” Doust says. That if isn’t just big—it’s existential.