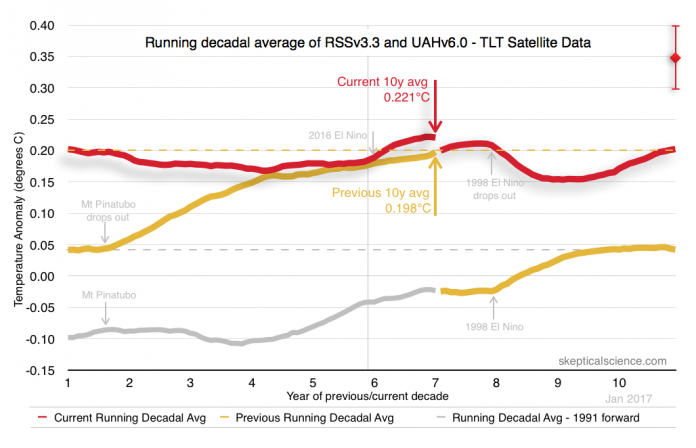 In 2011 a bet was started up between “skeptics” of man-made climate change who follow Pierre Gosselin’s “No Tricks Zone” blog, and myself and others here who follow SkS. It’s a simple bet asking, “Will the next 2011-2020 decade be warmer than the previous 2001 – 2010 decade?” We’re now over half way through this bet and here’s where we stand.

At no point in the past 7 years has the yellow line been above the red line, thus at no point during this bet has the previous decade been warmer than the current decade. In fact, at no point in the past 26 years has the decadal average been lower. The chosen data sets for the bet are an average of the UAH and RSS satellite data, which we now know have some challenges. But even with data that most benefits the cooler side of things, the decadal average temperature of every month of the entire past 6 years has been warmer than the previous decade. It was close 1-2 years ago, but still the current decade remained higher.

Even though there are four years left before this bet is completed I’m maintaining that the end result will be somewhere within that target range I’ve indicated on the far right. There’s nothing technical behind that target. It’s just the same amount of warming between the previous two decades (0.15°C) but with +/- 0.05°C included.

When I first went into this bet I had only been researching climate issues for a few years. At that time I was under the (mistaken) impression that satellite data was more reliable than the surface station data. I’ve learned a lot more since then.

At that time I did not understand how complex the satellite data actually were. I did not realize the data come from a lot of different satellites over this time period. I had not seen the satellite raw data at that time.

But that’s water under the bridge. The bet has been made and it must remain as we made it.

There are other issues about the satellite data that I also didn’t understand 6 years ago. We chose the TLT data (Temperature, Lower Troposphere) from the two data sets, but there are issues with this channel in terms of what part of the atmosphere it’s measuring.

Here I’ve overlaid the TLT channel as shown on the RSS website with an IPCC figure representing the spatial patterns of warming and cooling in the atmosphere (AR4 WG1, chapter 9.2.2). What you see is that the TLT data primarily measures a region about 2-3km in altitude, and well below the area of primary warming in the atmosphere. 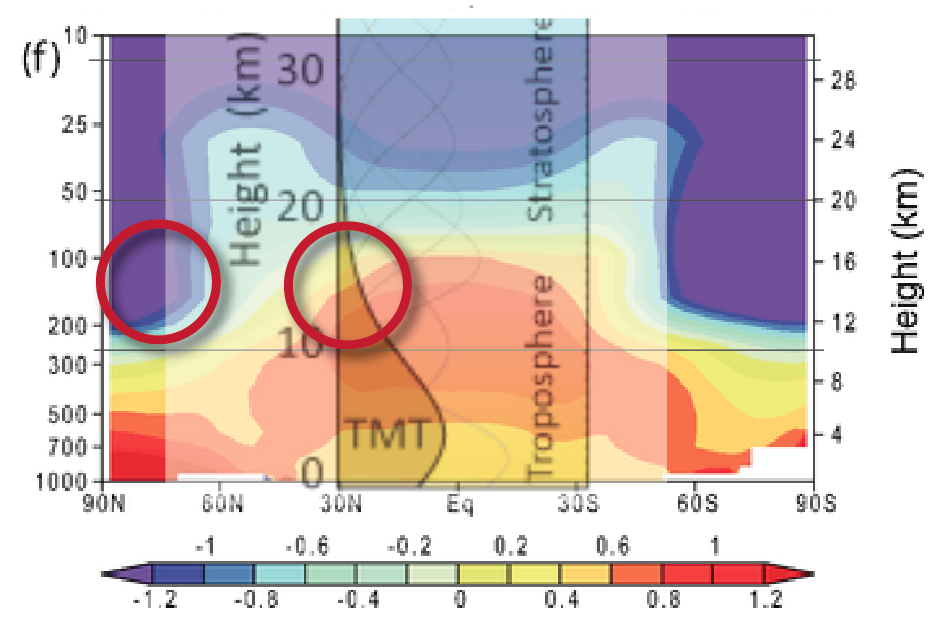 The TMT (Temperature, Middle Troposphere) does a little bit better job of picking up more of the troposphere and more of that warmer region in the mid-troposphere, but still doesn’t fully pick up where the warmest region is supposed to occur. The TMT data also has a big challenge in that the tail end of the channel is picking up significant bleed from the cooling stratosphere above  60°N and below 60°S.

RSS has a different product that is an improvement over both TLT and TMT called TTT (Temperature, Total Troposphere). This channel manages to pick up most of the troposphere in proportions that are probably giving a better indication of the warming of the troposphere.

Measuring the atmosphere with satellites has a key challenge that most people might not think about. Satellites orbit at a fixed altitude from about 700km above the surface. The sensors are reading from a fixed region relative to altitude. But the atmosphere doesn’t conform to those fixed altitudes. The tropopause ranges from about 10km at the poles to around 20km at the equator.

I’m not a researcher, so potentially there’s something I miss here, but it could be a novel idea to create a satellite product that mixes different channels for different latitudes. Say, TLT for polar regions, TTT for mid-latitudes and TMT for the tropics.

The RSS TTT data, with their latest update, now seems to fully support the data coming from the various surface station groups. There arguments between UAH and RSS about how to treat some of the data as to regards of the reliability. RSS chooses to drop the questionable data. UAH chooses to include it. The net result is UAH data is now an outlier with regards to their representation of global warming. They still show warming, but much less than anyone else.

But we’re stuck with an average of UAH and RSS TLT data for the purposes of the bet. And that’s fine. RSS TTT and TMT channels are operating on version 4, while TLT is still outputting with version 3.3. I’ve heard wind that there is an update to TLT data related to a paper that’s currently under review. It will be curious to see how the resulting update changes the look of this bet.

While satellite data was probably not the best choice for a bet like this, due to a long list of issues, it’s hardly going to matter in the end. The current running decade has been warmer than the previous one for the entire time during this bet. My expectation is that position will be held for the remaining 4 years. In order for the 2011 to 2020 decade to end up lower than the previous decade would require a truly massive amount of cooling for the remaining 4 years. The chances of that happening are extremely low. 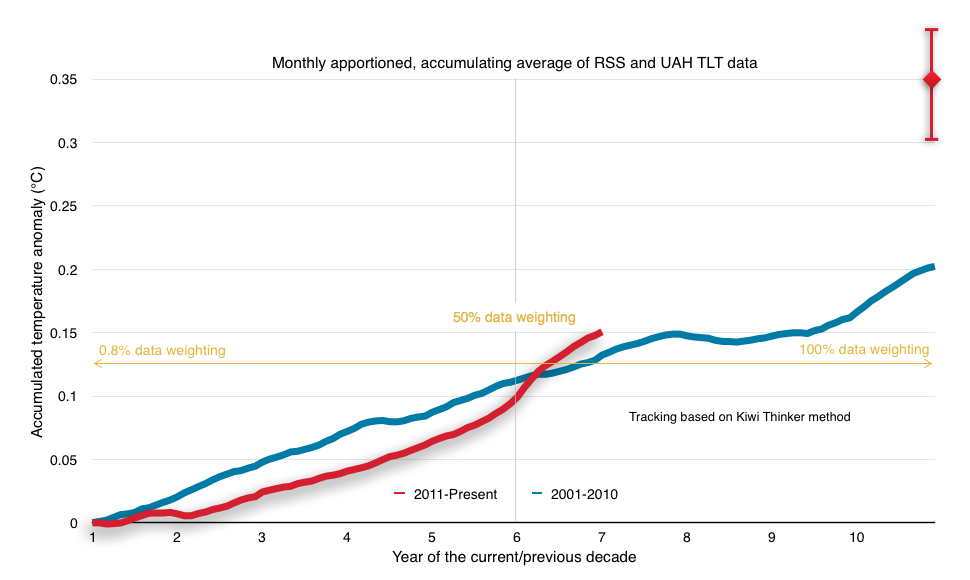