By comparing ancient sediment cores to modern-day plankton distribution data, the research concludes that zooplankton communities across the globe have shifted by an average of 602km since pre-industrial times.

The findings, published in Nature, show that “marine ecosystems have entered the Anthropocene”, the lead author tells Carbon Brief.

The global shift in zooplankton populations could have knock-on impacts for the marine life that feed on them, ranging from “fish to whales”, another scientist tells Carbon Brief.

From jellyfish to baleen whales, a huge variety of marine life feeds on plankton. “Plankton” is a catch-all term referring to tiny organisms that float in water. The research paper focuses on “zooplankton” or animal plankton, as opposed to “phytoplankton” (plant plankton).

Zooplankton is made up of microscopic, often single-celled organisms, as well as the eggs and larvae of larger animals, such as krill, jellyfish and crabs.

For the study, the researchers compare the distribution of zooplankton communities in the modern day to those in the pre-industrial era.

To gather data from pre-industrial times, the researchers took sediment samples from the first centimetre of the seabed in different sites across the world.

The study focused on a group of zooplankton known as foraminifera – which have hard outer shells that can stay preserved in sediment for centuries, explains lead author Dr Lukas Jonkers, a postdoctoral researcher from the University of Bremen. He tells Carbon Brief:

“To get an idea of the modern species communities, we used sediment traps. Sediment traps are big funnels – they’re about two metres high – and they are attached to the sea floor. They intercept everything that falls from the surface ocean so, in that sense, you get a very good picture of what should be below in the sediment.” 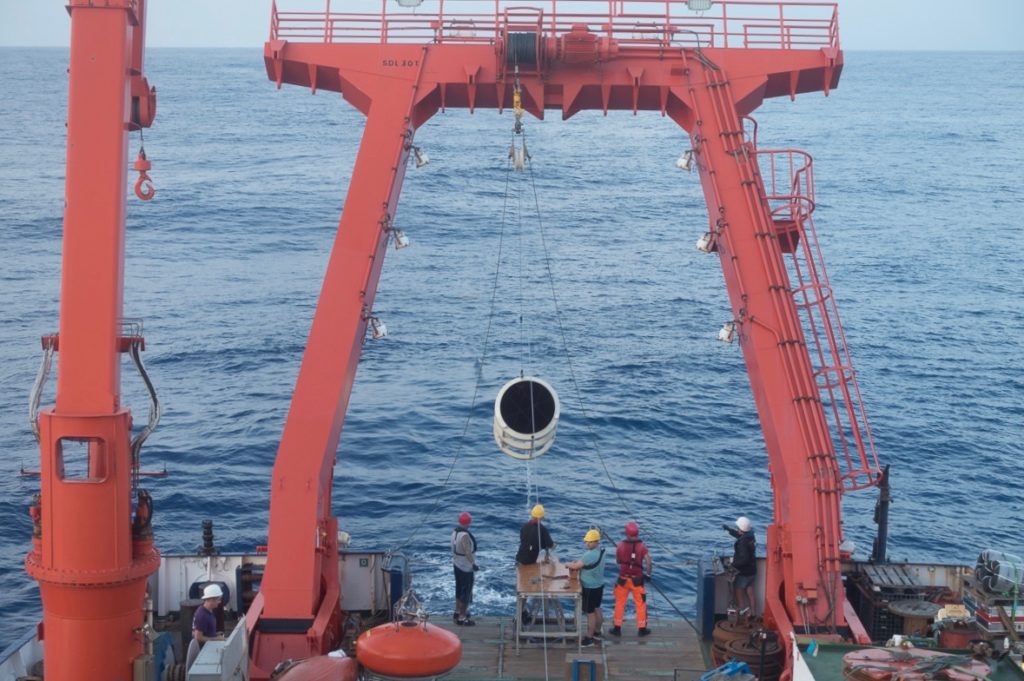 Recovery of a sediment trap on board the research vessel Meteor in the tropical North Atlantic Ocean. Source: Christiane Schmidt

The map below shows the location of the sediment traps (white dots) and the points at which ancient sediment samples were taken (grey dots). The map also shows sea surface temperature change between 1870 and 2015, with red indicating rise and blue indicating decline.

The results show that modern-day zooplankton communities differ from those in the nearest ancient sediment site and that the “degree of dissimilarity scales with temperature change”, the authors write in their research paper:

“This suggests planktonic foraminifera communities have changed considerably since the pre-industrial period and that they have done so to the magnitude of local temperature change.”

This is illustrated on the chart below, which shows the relationship between sea surface temperature change and the degree of dissimilarity between modern-day and pre-industrial plankton communities at a single site. 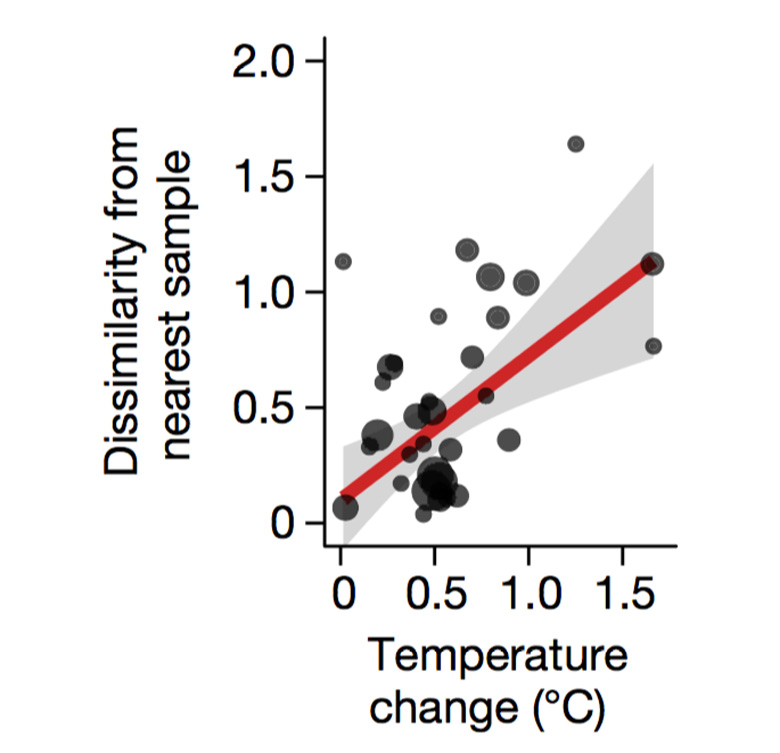 The relationship between sea surface temperature change and the degree of dissimilarity between modern-day and pre-industrial plankton communities. Source: Jonkers et al. (2019)

The authors also found that most modern-day plankton communities were more similar to ancient samples found further away – suggesting that communities had shifted their location over time.

By comparing pre-industrial and modern-day plankton samples, they calculated that the average community had shifted 602km poleward from pre-industrial times to today. However, the degree of displacement ranged from 45 to 2,557km – dependent on the degree of sea surface temperature change.

In the northern hemisphere, it was found that plankton communities had shifted northwards in response to warming, Jonkers says:

“We’re not seeing new species or new species compositions, we’re just seeing that the same species have moved with temperature change. In most cases, this is caused by warming – because almost everywhere in the ocean is warming. But in some cases, the ocean is cooling – then we see a shift towards colder communities.”

(Ocean cooling in some regions is driven by natural changes to the climate system.)

The shift in plankton communities towards the poles could be a harbinger of how ocean warming is impacting marine ecosystems, Jonkers says:

“We think that these findings are indicative of what is happening in marine ecosystems. If you take that assumption, it means that most species have moved their distribution.”

However, while some species that feed on zooplankton will be able to follow it to cooler waters, others may not be able to adapt to these new conditions, he says:

The findings suggest that the world’s oceans have entered the “Anthropocene”, he adds:

“Marine ecosystems have entered the Anthropocene. The changes that we are seeing are now big enough that we can say that these communities are different than before human influence.”

The research “builds upon known information” to “make a global statement”, says Dr Todd O’Brien, a zooplankton researcher from the National Oceanic and Atmospheric Administration (NOAA), who was not involved in the study. He tells Carbon Brief:

“In some ocean regions, we are seeing that some fish – and even whales – are also shifting further north, perhaps following their food or trying to stay in their preferred water temperatures, or a mixture of both.”