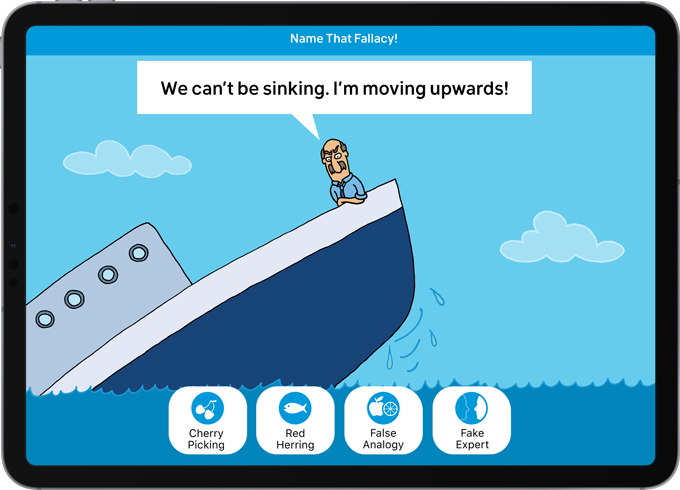 When it comes to climate change, it seems every family has its own version of the proverbial Cranky Uncle. An uncle, cousin, grandparent, in-law, neighbor, whatever. Just think back to the recent holiday season’s large family get-togethers.

And now your unique climate change version of Cranky Uncle will soon be yours for the asking for your delight and edification. This version will be unlike other flavors you’ve personally endured: This is a case in which folks wanting to better understand and teach about climate change are more likely to seek out the Cranky Uncle than to have to endure repeated visits from him.

The prototype version of the “Cranky Uncle” game, developed by John Cook, the founder of the popular skepticalscience.com website, is a product of Cook’s own years of experience in social science research as it applies to climate change. A researcher at George Mason University in Fairfax, Virginia, Cook says he’s been developing the online prototype for the game to “inoculate people against misinformation by explaining the techniques used to mislead them,” primarily using humor and cartoons.

“Teaching students how to evaluate claims using evidence and logic is my primary objective,” Cook emphasized in a recent email. “But these skills are not only for scientists. As citizens in a world full of misinformation, learning how to think critically is the best way to avoid being misled. Simply put, critical thinking is empowering.”

Cook illustrates clearly throughout the prototype that he recognizes that such critical thinking does not come naturally to just anyone. Instead, “it requires hard work and practice to overcome our biased and irrational brains,” he says. The game – be forewarned, it may be addictive even for those well-steeped on the details of the climate system – teaches in ways that are “fun and engaging.” Cook could well have added somewhat humbling also, as even those having a fairly sophisticated understanding of the issue may find themselves flubbing a multiple-choice question here and there. 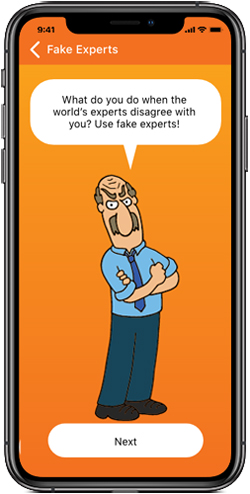 While the archetype lead character in the game may impress himself with his “gotcha” arguments against mainstream science, he’s actually committing common logical fallacies, says Cook. He says that rather than being frustrated by an inability to counter “bad arguments,” players learn to rebut them, “hysterically making Cranky Uncle crankier throughout the game.”

Cook can easily go on at length about the “formidable social and psychological challenges” to be overcome in putting the game together. Among them, fast thinking (instinctive) as opposed to slow thinking (effortful and challenging); tribalism as with political affiliation, which he calls “the greatest driver of climate denial”; and echo chambers, peoples’ tendency to consume information that reaffirms their existing preferences and viewpoints.

He says he turned as an academic researcher to “gamification” as a way to teach critical thinking.

Through interactive quizzes, points and rewards systems, and player-to-player competition, he hopes the iOS and Android games now being developed for release over the next few months will teach users to better assess arguments, rejecting spurious ones; spot fallacies; and sharpen their own critical thinking when it comes to climate change science.

Cook and colleagues have done some limited field testing of the pilot game in schools and in college and university classes, and he says “critical thinking ability increased after just 30 minutes of game-play.”

Through his crankyuncle.com website, he’s been doing some crowdfunding to support official development of the coming iOS and Android versions, building on the foundations of the web-based prototype, which itself is not available for test-drives. Cook says the online fundraising effort has exceeded initial goals and now provides enough support to move forward with the iOS and Android versions. He expects to launch them in late June and late September respectively, and work has begun on German-language versions. Other languages are in a queue beyond then.