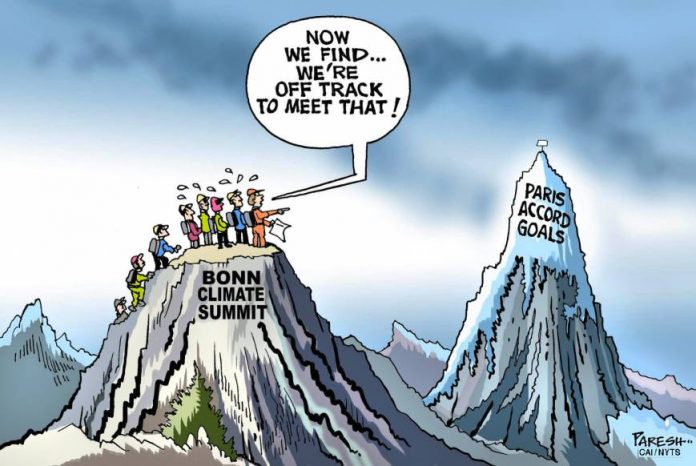 Oxford, ENGLAND – In response to climate change, land is key. Today, agriculture, forestry and other land uses account for roughly a quarter of global greenhouse gas emissions. But adopting sustainable land management strategies could provide more than one-third of the near-term emission reductions needed to keep warming well below the target — 2 degrees C above pre-industrial levels — set by the Paris climate agreement.

Conservation organizations like mine have long been working to balance the interaction between people and nature. But only recently have we fully grasped just how important land-use management is in addressing climate change. With the development of remote sensing, artificial intelligence and biogeochemical modeling, we can better forecast outcomes and develop strategies to manage and minimize adverse consequences.

Some of the most promising ways to mitigate climate change are what we call “natural climate solutions”: the conservation, restoration and improved management of land, in order to increase carbon storage or avoid greenhouse gas emissions in landscapes worldwide. The full potential of these solutions is detailed in a new study produced by my organization, the Nature Conservancy, and 15 other leading institutions.

Among the most important natural climate solutions is protecting “frontier forests” — pristine woodlands that serve as natural carbon sinks. Intact tropical and northern forests, as well as savannas and coastal ecosystems, store huge amounts of carbon accumulated over centuries. When these areas are disturbed, carbon is released. Preservation of frontier habitats also helps regulate water flows, reduces the risk of flooding and maintains biodiversity.

Reforestation is another important natural solution. Globally, an estimated 2 billion hectares (4.9 billion acres) of land has been deforested or degraded. Because trees are the best carbon capture and storage technology the world has, reversing these numbers would bring a significant reduction in global carbon levels. We estimate that the world could capture 3 gigatons of carbon dioxide annually — equivalent to taking more than 600 million cars off the roads — simply by planting more trees.

A third category of natural solution is agricultural reform. From field to fork, the food sector is a major contributor to climate change through direct and indirect emissions, and by its often-negative effects on soil health and deforestation. Recognizing these risks, 23 global companies — including Nestle, McDonald’s, Tesco and Unilever — recently signed a commitment to halt deforestation in Brazil’s Cerrado savanna. The region, which covers a quarter of the country, has come under growing pressure from production of beef, soy and other commodities, together with the associated infrastructure.

As the Cerrado pledge demonstrates, when governments and businesses come together to address land-use challenges, the impact is potent. Natural climate solutions have the potential to reduce carbon dioxide emissions by an estimated 11.3 billion tons a year — equal to a complete halt in burning oil, according to our study. One recent study calculated that if Brazil reached zero deforestation by 2030, it would add 0.6 percent of GDP, or about $15 billion, to its economy. Communities also reap secondary benefits — such as rural regeneration, improved food and water security, and coastal resilience — when natural climate solutions are implemented.

Yet, despite the data supporting better land-use decision-making, something isn’t adding up. In 2016, the world witnessed a dramatic 51 percent increase in forest loss, equivalent to an area about the size of New Zealand. We need to buck this trend now help the world realize that land-use planning is not simply a conservation story.

Some countries are moving in the right direction. The Indian government, for example, has set aside $6 billion for states to invest in forest restoration. In Indonesia, the government created a dedicated agency to protect and restore peat land, bogs and swamp-like ecosystems that have immense carbon dioxide storage capabilities.

But they are the exceptions. Of the 160 countries that committed to implementing the Paris climate agreement, only 36 have specified land-use management in their emissions-reduction strategies.

Overcoming inertia will not be easy. Forests, farms and coasts vary in size, type and accessibility. Moreover, the lives of hundreds of millions of people are tied to these ecosystems, and projects that restore forest cover or improve soil health require focused planning — a massive undertaking for many governments.

One way to get things moving, especially in the agricultural sector, would be to remove or redirect subsidies that encourage excessive consumption of fertilizers, water or energy in food production. As Indian government officials reminded their peers during a World Trade Organization meeting earlier this year, meaningful agricultural reforms can begin only when rich countries reduce the “disproportionately large” subsidies they give their own farmers.

Supporting innovation and entrepreneurship can also help power change. New processes and technologies in landscape planning, soil analysis, irrigation and even alternative proteins such as plant-based meat are making agriculture and land use more sustainable. Similarly, changes in the construction industry, which is turning to more efficiently produced products like cross-laminated timber, can help reduce carbon pollution.

Finally, financing options for natural climate solutions must be dramatically increased. While payments to conserve forests are starting to flow under the U.N.’s REDD+ program and the Green Climate Fund has committed $500 million for forest protection payments, total public investment in sustainable land use remains inadequate. According to the Climate Policy Initiative, public financing for agriculture, forestry and land-use mitigation attracted just $3 billion in 2014, compared with $49 billion for renewable energy generation and $26 billion for energy efficiency.

At the U.N. climate change meeting that just concluded in Bonn, Germany, global leaders reaffirmed that the world cannot respond adequately to rising temperatures if governments continue ignoring how forests, farms and coasts are managed. Now that there is a firm consensus, governments must act on it.