A $10bn clean energy programme launched at the Paris climate talks “by Africa, for Africa” is in turmoil after interventions by the EU and France.

In a resignation letter obtained by Climate Home, the top official of the Africa Renewable Energy Initiative (AREI), Youba Sokona, accused donors of a deliberate strategy to “railroad” Africans into rubber-stamping projects selected by Europeans.

Matters came to a head in Conakry, Guinea, on 4 March, where the board approved 19 projects worth €4.8 billion ($5.2bn). By Sokona’s account, the Europeans present “managed to effectively force through” the list, overriding “a string of reservations” expressed by some African members.

“There was evident contempt for, and abandonment of, the AREI principles,” he wrote.

When launched, the AREI was vaunted as a scheme to bring clean power to the continent, on African terms. But many of the projects chosen by European Commission representatives are neither new, renewable nor owned by Africans.

Sokona announced his resignation on the spot and leaves the post at the end of April, with no replacement lined up.

French environment minister Ségolène Royal and EU commissioner for international development Neven Mimica led the non-African delegation at the meeting. Mimica’s EU officials chose the projects, but according to Sokona’s letter, Royal asked him to present them to the AREI board. He refused, on the basis he had not seen the list until two days earlier.

High-level representatives from Egypt, the African Development Bank – which hosts the AREI staff – and the African Union expressed concerns at the board meeting about bypassing the AREI screening process. But the presidents of former French colonies Chad and Guinea, Idriss Déby and Alpha Condé, aligned with the Europeans in urging members to give the go-ahead, Climate Home understands.

Two officials from Royal’s private office acknowledged there had been disagreement, but denied Royal had exerted undue influence. President Condé convened the meeting, they said, and Royal was there to “facilitate”.

“Our minister was very keen to help him push forward quickly and efficiently. It was important for everybody to jump-start the initiative… and not have it bogged down by governance issues,” said Royal’s advisors.

This was an “exceptional process”, they added. “The decision was made by the Africans to select the projects as soon as this meeting because they considered that the projects were ready to be moved forward – despite the fact that the governance is not fully set up and finalised.”

A spokesperson confirmed that the European Commission had identified 14 of the projects, at the request of the AREI board. Five that had been first presented at UN climate talks in Marrakech were then added to the list. Minutes of the meeting have yet to be published, nearly two months later.

The incident is a fracture in the solidarity that allowed rich and poor countries to reach a climate agreement in Paris. Under the UN deal, many developing countries put forward their first ever pledges to curb greenhouse gas emissions. Those commitments hinge on financial support from the developed world. But where the money comes from and who controls where it goes remain fraught questions.

In this case, donors – which include Canada, the US and Japan as well as EU member states – pledged to “mobilise” $10 billion by 2020. This is to install 10GW of “new and additional” clean power capacity across the continent.

But while the African technical team expected this to mean new climate finance, the developed countries argued for old money to count towards meeting the 10GW goal. In their joint statement from Paris, they said the money would flow “through a variety of mechanisms”, including a list of existing finance programmes.

The resulting first tranche comes from various development banks and involves only one euro of public funding to 15 of private investment. Critics say the minimal public input indicates the projects were already commercially viable. That suggests the initiative has relabelled business-as-usual, not driven the access to clean energy Africans need.

The list presented by the EU to Africans includes four large grid infrastructure projects, which support clean and dirty energy alike. An interconnector planned for west Africa will facilitate “large-scale development” of hydropower and natural gas resources, according to the World Bank.

At least one of the initiatives – the Tendaho geothermal project in Ethiopia – got funding approval before the AREI launched.

This was all agreed by the African board, Royal’s advisors stressed. “A lot of these projects, they don’t come out of a bag just like that, a lot of them have been in the pipeline for a long time… If it was not for AREI, maybe these projects would still be in limbo.”

Western private investors stand to benefit from the deals. For example, the privately-owned 30MW Djermaya solar plant in Chad is being developed by a group of companies headquartered in London, Paris and Toronto. Whatever the side-benefits, Chadians will pay for this clean energy and the profits end up in Westerners’ pockets.

This was not the programme Sokona, a Malian with four decades’ experience in energy policy and sustainable development, had in mind.

He laid much of the groundwork for AREI unpaid before being officially appointed to lead the independent delivery unit from August 2016. In a video on the AREI homepage, he explains his intention to “reverse the dynamic” whereby aid donors typically set the agenda. Under his vision, African countries would put forward proposals to be screened by African technical experts and approved by African leaders.

“It is not energy per se. It is how to change the life of the people, how to give to them better conditions, better situation and better future. The technology is only a pretext to do that,” Sokona said in the video.

By January 2017, Sokona’s team had identified a pipeline of 442 projects across Africa, but not filtered them through AREI criteria. An AREI report on the list of projects notes the “over-whelming dominance of plans for large regional projects” rather than “transformative” programmes for energy access and capacity building.

At the same time, Royal was taking matters into her own hands. She had assumed the presidency of COP21, the historic 2015 Paris climate summit, after the event. This was a chance to start putting the Paris Agreement into practice. It may also have bolstered her credentials for an (ultimately unsuccessful) bid to lead the UN development programme.

A report presented on the sidelines of the UN general assembly in September 2016 put Royal’s name above the AREI logo. It includes more than 20 photos of her touring African countries and glad-handing leaders. In the foreword, she hails the “extraordinary potential” of the initiative. “We… need Africa to be able to make a real difference with its own solutions,” she writes. 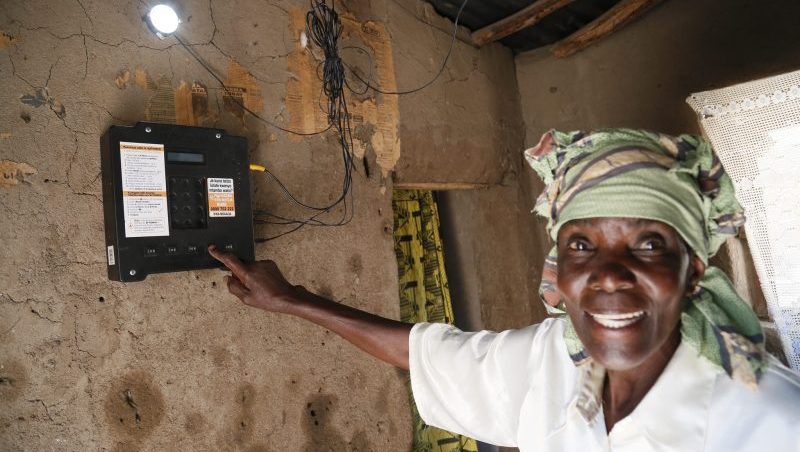 Yet in the end, Africans were left out of the loop. Hearing of the Conakry row, nearly 200 African civil society organisations signed an open letter objecting to the EU “hijacking” the initiative.

Tasneem Essop, founder of the Energy Democracy Initiative in South Africa, described the European players’ behaviour as “absolutely shocking”. “[AREI] was one of the most inspirational initiatives emerging from Africa. We were so desperate for this kind of leadership,” she told Climate Home.

Far from the focus on community access to clean energy Essop hoped for, the EU list represented “business as usual”. And the way it was imposed was all too reminiscent of the history of development finance being dictated by the rich. “We thought we had passed those ways, but this is such an explicit and crude grab, it is mind-boggling that this could have happened now.”

Essop argued that the developed world, which bears most responsibility for causing global warming, has a duty to support Africa in clean growth. “They [donors] think it is charity. It is not charity. This is very much part of the obligations under the UN climate convention.”

Profile: Can this woman restore Kenya’s faith in solar power?

The civil society letter calls on the EU and France to surrender any aspiration to board membership and respect the initiative’s autonomy. “AREI must be run by Africans for Africans. Interference in African governance belongs to another era,” it says.

Asked how France would rebuild trust in the process, Royal’s advisors said: “It is an African-led initiative and it is really for the Africans to discuss this and make sure [the process] is inclusive. What our minister can do is mention this to President Condé and she will work to that effect, as a facilitator.”