The evacuation of nearly 200,000 people near Oroville Dam is the kind of event that makes climate change personal. A co-worker of mine was forced out of his home for several days by the emergency evacuation, and another friend was visiting Lake Oroville and happened to leave 15 minutes before the evacuation order was issued.

Like many extreme events, the Oroville emergency is a combination of natural weather likely intensified by climate change. California regularly sees “atmospheric rivers” that deluge the state with rainfall, but in a hotter world, scientists anticipate that they’ll be amplified by an increase in the amount of water vapor in the atmosphere.

Northern California is in the midst of its wettest rainy season on record – twice as wet as the 20th century average, and 35% wetter than the previous record year. It proved to be almost too much for America’s tallest dam to handle. Water managers were forced to use Oroville Dam’s emergency spillway for the first time ever, which then began to erode, posing the threat of a failure and catastrophic flooding of nearby towns. 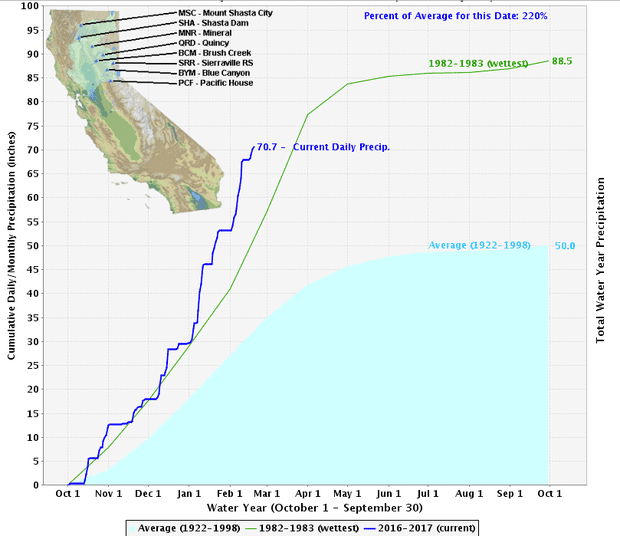 While studies haven’t yet connected this extreme wetness to climate change (there are still several months remaining in California’s rainy season), what we’re seeing is consistent with climate scientists’ expectations of a hotter world.

Dams in the United States were built 50 years ago, on average. Since then, the Earth’s surface temperature has warmed about 0.75°C, and there’s now more than 5% more water vapor in the atmosphere as a result, which intensifies storms. With hotter temperatures, more precipitation falls as rain and less as snow, and California’s Sierra snowpack also melts earlier in the year. Climate change stresses California’s water infrastructure through all of these mechanisms.

Peter Gleick of the Pacific Institute has been researching the impact of climate change on the water cycle since the 1986, when his dissertation was the first research to conclude that the Sierra snowpack would be at risk due to rising temperatures from global warming. He also found that this would lead to increased winter runoff and flood risks, which is exactly what we’re now seeing. As Gleick told me:

Our infrastructure was designed for yesterday’s climate, not today’s or tomorrow’s. We know the climate is changing and we need to be prepared.

Gleick warned 30 years ago that this increased runoff would add stress to California’s water infrastructure, also noting that in a hotter world, more precipitation would fall as rain and less as snow.

California will get the worst of all possible worlds – more flooding in the winter, less available water in the summer.

Gleick’s words now seem prescient. Research has shown that conditions that create both wet years and hot dry years in California are becoming more frequent. California’s intensely wet 2017 is a prime example of weather whiplash, as the state is just now emerging from a 5-year drought that was its most intense in more than 1200 years.

Studies have found that global warming intensified that drought by about 15–35% through factors like increased evaporation and water demand, pushing it into the realm of record-shattering intensity. As Gleick recently wrote, extreme weather is battering California:

We already see fundamental changes in storm frequency and intensity, increases in the size and duration of droughts and rainfall events, disappearing snow packs, growing agricultural water demands with rising temperatures, and more.

We cannot afford the luxury of pretending climate change isn’t real, and we cannot afford to ignore the risks to our water infrastructure posed by these changes. Any investment in infrastructure must take climate change into account through smart flexible design, integration of better weather-forecasting and modeling tools, and adoption of new standards for facility construction and operation.

Environmental groups warned the state about Oroville Dam in 2005, noting that in an intensely wet year like we’ve seen in 2017, its emergency spillway could erode, and thus should be coated with concrete. State agencies concluded that the cost of this project couldn’t be justified given the low probability of such a wet season, but climate change increases the likelihood and intensity of extreme precipitation events. The environmental groups were proven right.