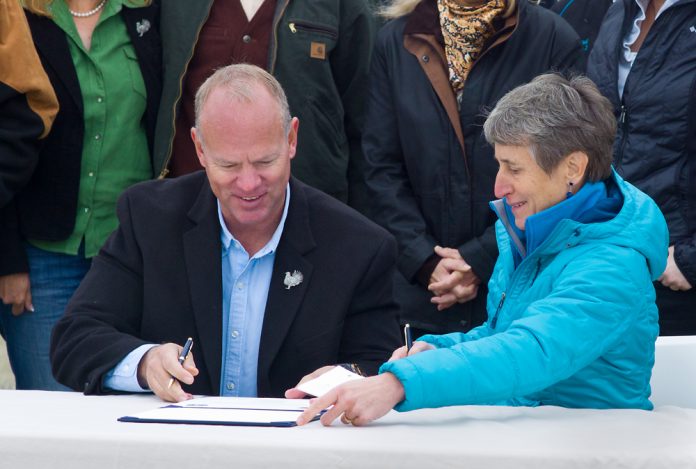 “I follow the lead of our scientists and experts on that who suggested that’s just really not going to be something that works,” Mead told WyoFile last week.

The federal grouse conservation effort concluded in 2015 with revision of 98 Bureau of Land Management and Forest Service plans in 10 states, focused on habitat, not grouse numbers. Adoption of the plans covering 67 million federal acres kept the grouse from being listed as threatened or endangered.

“The issue wasn’t necessarily a population at a point in time — it’s whether the habitat was there to support a healthy population,” Mead said of the federal strategy Wyoming participated in. “If we’re talking about captive breeding, it sort of dismisses that there’s a healthy population of birds out there. There’s many, many birds.”

Zinke’s Secretarial order calls for “integration of State and local concerns and approaches into sagebrush management and conservation on Federal lands.” It asks the task force “to give appropriate weight to the value of energy and other development of public lands.” A goal is “to conserve the Sage-Grouse and its habitat without inhibiting job creation and local economic growth.”

Zinke’s order refers frequently to habitat and calls for an examination of invasive grasses that spread fire through sagebrush, along with a review of firefighting strategy. A listing under the ESA would put great restraints — likely greater than those imposed in the 2015 conservation plans — on what could happen in federal and private sagebrush country.

Would changes make the grouse endangered?

There’s a reason grouse raising isn’t part of the current strategy, conservationists say. “Sage grouse farming was never considered as part of the federal sage grouse plans because it has been completely discredited in the science,” said Erik Molvar, executive director of Western Watersheds Project. “After almost a century of attempts, transplanting sage grouse has been abandoned as a viable strategy by the scientific community.”

Federal law requires land and wildlife managers to preserve the habitat of wildlife, not just wildlife itself. “The purpose of the ESA is to conserve endangered and threatened species and the ecosystems on which they depend…” the U.S. Fish and Wildlife Service says in outlining the act. A species can be listed and protected if there’s “the present or threatened destruction, modification, or curtailment of its habitat or range,” among other reasons.

If a modified federal conservation plan would replace natural breeding with captive breeding in an effort to keep grouse off the threatened or endangered list, would that be at odds with the Endangered Species Act, which calls for preserving ecosystems?

“Yes, it’s counter to the intent of the act,” said Brian Rutledge, central flyway conservation strategy and policy advisor for Audubon Rockies. “What we need to invest in is restoring habitat.”

Today, 50 percent of the country’s original grouse range remains in sagebrush habitat, the rest disturbed or developed, he said. But the habitat’s carrying capacity has diminished “by somewhere around 90 percent.” That’s why we have only 10 percent of the original numbers, he said. 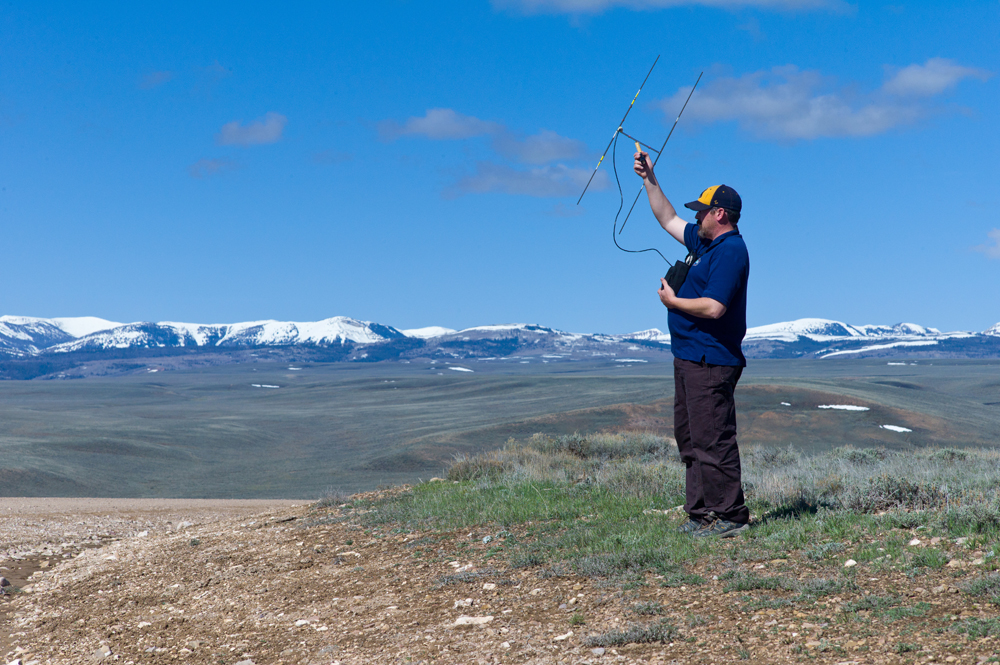 Greater sage grouse need vast tracts of undisturbed land, like that behind BLM biologist Dale Woolwine, seen tracking a radio-collared grouse in Sublette County on April 28, 2015. Some sage grouse from this stronghold have been tracked to winter habitat that’s eyed for development as the NPL gas field. (Angus M. Thuermer Jr./WyoFile)

The landscape has been fragmented “to the point it won’t support the kind and number of birds that it used to,” Rutledge said. “What we need to focus on, now that we’ve stopped the bleeding with the core-area plan, … is [to] go back and heal the patient. We don’t have a population problem, we have a habitat problem.”

Further, grouse breeding could be dangerous. Among Rutledge’s worries are creation of a genetically “homogenous sage grouse.”  Greater sage grouse genetics are varied across its range and captive breeding could disrupt that, he said.

Diseases also are a worry of captive breeding. They derailed captive breeding of endangered Attwater’s prairie chicken, a species taken into the lab for captive breeding as a last resort when its population in 1996 dwindled to 42. Reticuloendotheliosis virus, an infectious disease, devastated captive broodstock and prevented releases into the wild.

The slaughter in the early 2000s of some 1,000 farm-raised Colorado elk over fears of chronic wasting disease also underscores the dangers of sickness spreading among captive wildlife. “How much closer to home do we have to get,” Rutledge asked.

Finally, there’s the issue of captive grouse learning to survive. “These birds are dependent on old, seasoned females showing them the ropes,” Rutledge said.

Throw a few birds at the problem

To what end would captive-raised greater sage grouse be used? One prospective breeder — Casper business and oilman Diemer True — has said they could be employed as mitigation for destruction of habitat by development. But Rutledge, who sits on Wyoming’s Sage Grouse Implementation Team with True, says that’s not proper.

“Yes, it will be suggested,” Rutledge said. “Yes, it has been suggested. The reality is, it’s not going to work.” Also, supplementing populations with game-farm birds is not part of Wyoming’s mitigation plan, he said.

“What’s been talked about is how do we compensate for damage done,” Rutledge said of mitigation. The most important element is conservation of the sagebrush itself. Many threats to greater sage grouse can be traced to habitat problems in that key landscape, he said.

Even predation of grouse — by everything from coyotes to foxes, skunks and ravens — is related to habitat, he said. Zinke said predator control would be reviewed, but Western Watershed’s Molvar agreed with Rutledge that habitat is key.

“The consensus among biologists is that the natural predators of sage grouse only become an issue when human-caused habitat problems — like power lines or overgrazing — give predators an unnatural advantage,” he wrote in an email to WyoFile. “In addition, a Wyoming study found that coyote-killing programs are actually counterproductive because they result in expanded populations of smaller predators that are the real problem for sage grouse.” 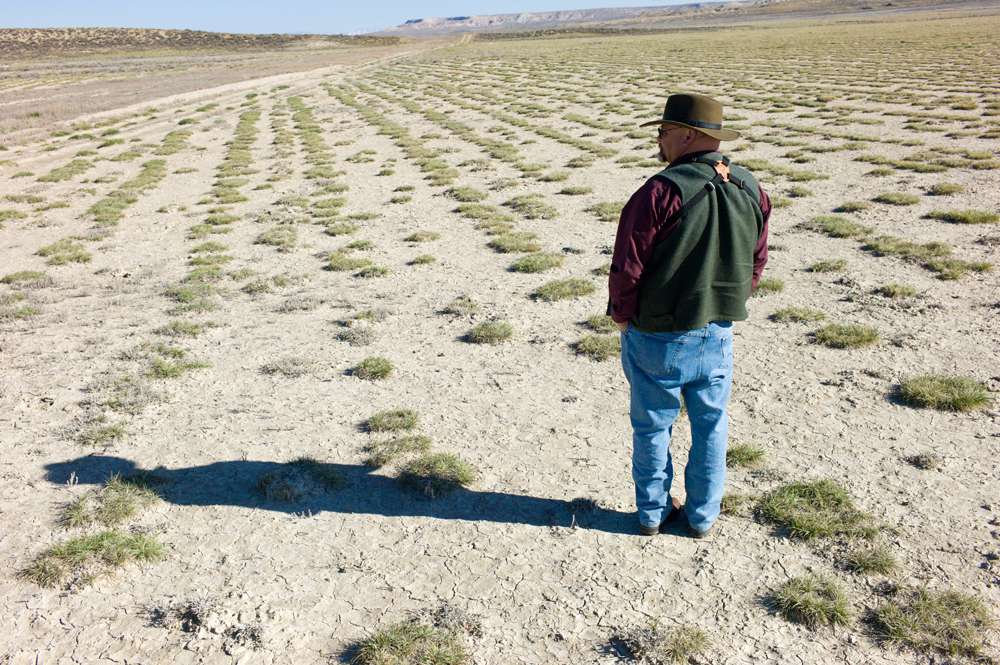 Kyle Hansen, BLM’s Pinedale assistant field manager for resources, looks over acreage in a Sublette County winter concentration area where the agency tried years ago to replace sagebrush with grasses more palatable to livestock. Grouse conservation here in the future will likely seek to protect sagebrush, but details still have to be worked out. (Angus M. Thuermer Jr./WyoFile)

Zinke said critics of the existing plans don’t see habitat as paramount. “Some states have expressed a concern because the habitat issue has been emphasized while other management hasn’t,” he said last week, pointing to predators and West Nile virus as grouse inhibitors. Just because you have habitat doesn’t mean the health of a flock is good, he said.

Thousands of westerners weighed in on plans

Groups involved in the sage grouse conservation process in Montana were taken aback by Zinke’s comments justifying the review. He spoke about anger in the West over a heavy handed federal approach. “There is a lot of mistrust,” Zinke said last week. “A lot of these local communities … just don’t think they’ve had a voice.”

Zinke served in the Montana Senate from 2009 to 2011, representing the city of Whitefish in the northwest part of the state. He was elected to the U.S. House in 2015, as sage grouse conservation efforts were coming to a head under the specter of an endangered species listing. Zinke served in the U.S. House until being appointed Secretary of the Interior by President Trump.

While Zinke wasn’t part of groups designing grouse policy in Montana, he would have been aware of the process in the state, participants said.

“I believe members of the Montana delegation were kept appraised of the process as it was going on,” said Glenn Marx, director of the Montana Association of Land Trusts. “Montana did approach it in a very collaborative, very transparent, very open fashion,” he said, “I don’t know what [Zinke] was referring to when he said other voices were left out.”

The oil and gas industry played a prominent role in crafting Montana’s policies to protect the birds, said Janet Ellis, who helped the state develop conservation strategies as both a state legislator and senior director of policy for the Montana Audubon Society. She’s also uncertain why Zinke would have felt some western voices were not heard. “I don’t know what that means,” she said. “Maybe other states?”

A hard copy of one final federal conservation study covering much of Montana and the Dakotas — hundreds and hundreds of pages long — was sent to Rep. Ryan Zinke, according to the document. In that planning process, the Lewiston, Montana, BLM office considered 257 substantive comments found in letters from 40 persons, the document said. Similar involvement engaged communities, individuals, officials and organizations across the 11 states. 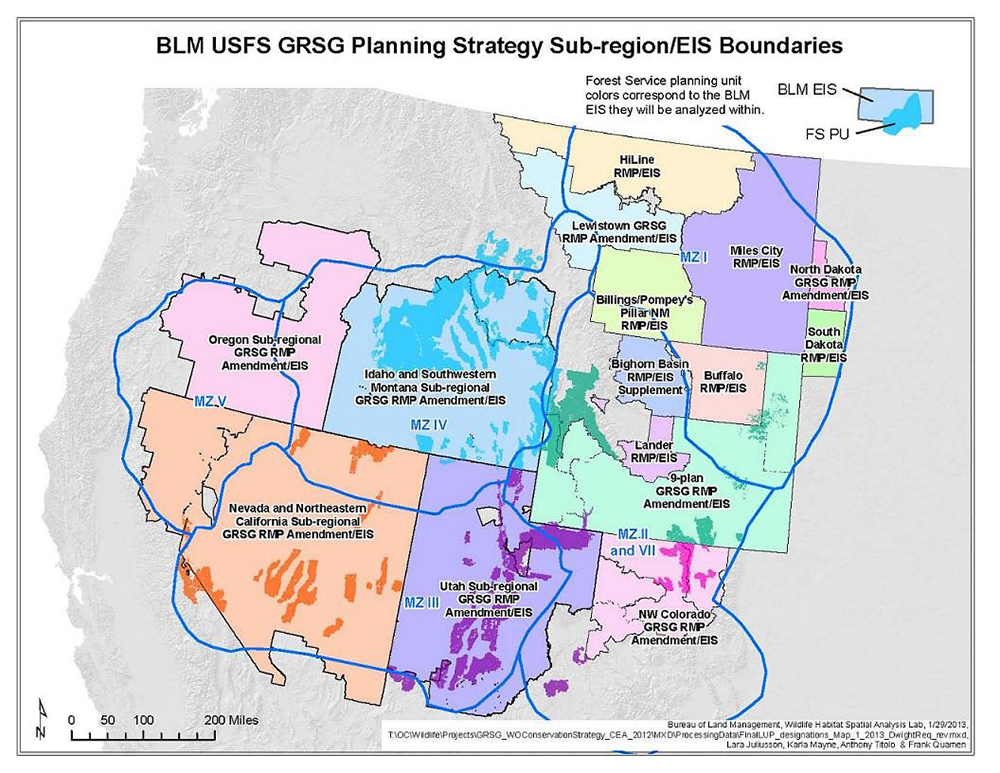 This map shows the many areas and jurisdictions in the West where the BLM and U.S. Forest Service forged conservation plans for the greater sage grouse. In all, 98 plans in 10 states covering 67 million acres involved dozens of communities over approximately four years. (U.S. BLM)

Mead is aware some groups are still critical and may have caught the secretary’s ear. Just because there was collaboration on the west-wide effort, “that’s not to say that everybody agrees with where it’s ended up,” the governor told WyoFile. The Wyoming Stock Growers Association, for example, sued the BLM and Forest Service over the 2015 plans, claiming laws weren’t followed, and their interests weren’t properly considered, according to Courthouse News Service.

The comments from Zinke last week echoed a statement he made in 2015, when he was Montana’s congressman and then Secretary of the Interior Sally Jewell unveiled plans to protect the bird. “Once again the Obama Administration is undermining the authority of sovereign states to manage our own land, resources, and wildlife with one of their signature ‘Washington knows best’ plans,” Zinke wrote in a statement. “I support a state-based plan that gives local stakeholders a seat at the table.”

Zinke is responding to orders from Trump, not reacting to western voices, said Land Tawney, the CEO of Backcountry Hunters & Anglers in Missoula, Montana.

“This is coming from his boss,” Tawney said, “and they’re trying to really take away any restrictions for oil and gas development which in some cases this will but mostly it won’t.”

Tawney worries what a rollback of what he called “one of the largest collaborative efforts here in the West” could mean for the delicate relations between the region’s conservationists and industry.

Mead last week said western governors had called the secretary to talk about his review. “He wants it to be a state initiative, state driven,” the governor said.

“I don’t think anybody says it’s perfect,” Mead said of existing plans. “There’s room for improvement, I think, in a number of ways. There can be changes but we have to move forward carefully on this because already so much has been put into it.”

Rutledge said Zinke could become educated. “What we have is an opportunity for learning,” he said. “The governors are going to help get this right … help [Zinke] with a learning opportunity.”