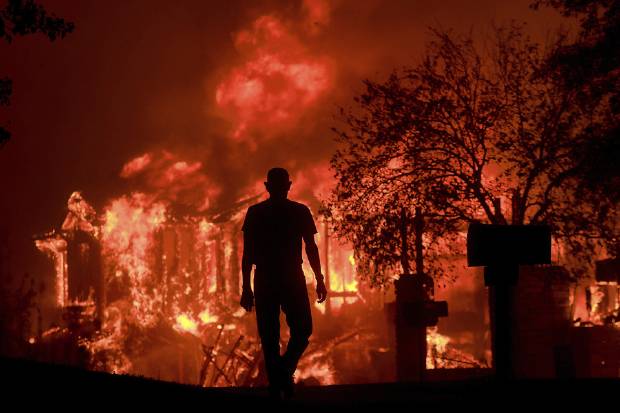 Already on pace to be the second- or third-hottest year on record, 2017 also will be remembered for another milestone: the most natural disasters in the United States costing more than $1 billion in the shortest time span.

Fifteen catastrophes resulting in more than $1 billion in federal and private insurance claims hit the U.S. in the first nine months of 2017 – an unprecedented pace, according to the National Centers for Environmental Information. If the California wildfires surpass $1 billion, as expected, 2017 would tie 2015’s record of 16 $1 billion disasters.

According to some experts, it’s no accident and not entirely natural.

“It irritates me to hear all these described as ‘natural’ disasters,” said Kevin Trenberth, a senior scientist in the Climate Analysis Section at the National Center for Atmospheric Research in Boulder. “Yes, hurricanes and wildfires are natural phenomena, but they are made worse by climate change and human actions.”

When climate change and a natural variation that changes weather patterns – the El Niño Southern Oscillation, for example – interact, they amplify one another, Trenberth said.

“That’s when we break records.”

The heightened levels of carbon dioxide and other greenhouse gases in the air trap heat in the atmosphere, contributing to the rise in sea levels and drought, among other consequential climatic shifts.

In the longer term, the accumulation of these day-to-day changes pushes catastrophes past the historical threshold.

“If that threshold had not been crossed, those costs would have been a lot less.”

Higher temperatures are increasing the frequency and severity of inland flooding in the United States. In 2016, there were four $1 billion floods, double the previous record, the National Center for Atmospheric Research said in a blog post from October.

The center attributed the record number to higher temperatures “loading” the atmosphere with water vapor, which, over time, increases the potential for extreme rainfall.

As the cost of hurricanes Harvey, Maria and Irma and the California wildfires continue to soar with more damage assessment, more experts are forecasting that natural disasters amplified by climate change will continue to take a serious financial toll on the country.

“We expect these costs will continue to rise in the future due to both an increase in exposed properties in harm’s way and the increase in the frequency and intensity of some types of extreme weather that leads to costly disasters,” said Brady Phillips, a climate spokesperson with the National Oceanic and Atmospheric Administration, the umbrella agency of the National Center for Atmospheric Research. “As one example, the U.S. Western wildfire season is now much longer and more costly than it was in the recent past. We now have more assets at risk and a greater likelihood of severe wildfire conditions.”

In a report released Oct. 23, the Government Accountability Office concluded that the effects of climate change are costing the federal government hundreds of billions of dollars. Over the last decade, the watchdog agency of Congress said, the cost of disaster assistance and flood and crop insurance losses was $350 billion, not including the most recent hurricanes and wildfires and excluding private insurance claims.

Moreover, those costs are expected to dramatically increase in the coming decades, possibly as much as $35 billion per year by 2050.

Unlike the National Center for Atmospheric Research estimates, the Government Accountability Office’s figures exclude private insurance claims, a number Nicholas Flores, a professor in the University of Colorado at Boulder’s economics department, also expects to rise with a change in extreme weather events.

“If we wanted to put a price tag on climate change, we need to understand how the distribution of storms is shifting and how the expected losses are changing,” Flores said. “It’s difficult to do since things are ramping up, to the point where 20 years ago, we didn’t even think storms like this were possible.”

Flores explained that damage assessment projections, particularly for insurance premium pricing, are based on historical data: how many fires, for example, are likely to happen in a year, how many houses they will destroy, determines how much someone will pay for homeowners insurance and how much money insurance companies will put aside to cover losses.

Insurers, including the federal government, the nation’s sole provider of flood insurance, are more at risk to go insolvent, meaning they are unable to pay their insured what their plan covers.

She said the technology available for such risk assessment is “sophisticated,” but not enough to fully adjust to what she describes as “an escalating trend” of megacatastrophes in increasingly populated areas with higher asset values.

“We are in a new era of megacatastrophes,” Walker said.