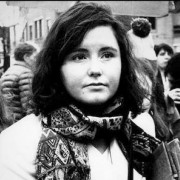 Five Extinction Rebellion activists were
arrested last night in Dublin after locking themselves to the gates of the
Dail.

Extinction Rebellion Ireland (XRI) members locked themselves to one of the exit gates of the government building at around 9pm, blocking an estimated 20 TDs and ministers from leaving Leinster House.

Starting at around 11.00pm, gardaí worked for up to two hours to break the locks and removing the climate and biodiversity activists as others members of XRI chanted and cheered in support.

Other demonstrators continued a sit-down protest in front of the gates, with several removed to open a route for people to leave Leinster House.

The incident occurred at the exit on Merrion Square West opposite the temporary site on the square set up by XRI activists on Monday. It is unclear at this stage if any of the five will be officially charged.

The arrested activists were taken to Pearse Street staion for public order offences but were released without charge.

People have been gathering at Merrion Square every day this week as part of Extinction Rebellion’s week-long series of actions, demanding that the government take greater climate action.

A number of barriers were erected by gardaí earlier in the day in front of Leinster House on Kildare Street and at Stephen’s Green.

The international movement began last
summer in the UK and rose to prominence in November 2018 when thousands of
activists blocked London bridges, disrupted traffic, and glued themselves to
public buildings.

Earlier in the day, four members of XRI
glued themselves to the front door of Red Flag Consulting, an international
communications company based in Dublin.

The company has engaged in communications work in relation to pesticides and was recently hired by agricultural groups to promote Ireland’s dairy industry.

Protesters had signs around them
condemning the organization, with a sign reading, “Promoting RoundUp, now Irish
meat and dairy”.

To date, agriculture is the largest
greenhouse gas emitter in Ireland, contributing roughly a third of all total
emissions. The European average is around 10 per cent.

Earlier this summer, members of XRI held a similar action where five members glued themselves to the Department of Climate Action to protest the blocking of a Bill to limit the issuing of new fossil fuel licences.

Protesters from both XRI and Save Leitrim
also held a demonstration outside the Dail yesterday calling on the Government
to support sustainable forestry.

The groups raised issue with the low
forest cover in Ireland, which is amongst the lowest in Europe at around 11 per
cent. The European average is 33.5 per cent.

Both groups are critical of the Government’s
support for a conifer plantation led forestry model, with XRI interrupting the Minister for Climate Action
Richard Bruton earlier this summer at a forestry industry event.

Conifer species are the dominant species in Ireland, representing just over 71 per cent of the stocked forest area, while broadleaves make up almost 29 per cent.