The NSW government will hand back more than $250 million to a Chinese mining giant to scale back a coal mining exploration licence on the Liverpool Plains.

It says the decision will protect prime agricultural land but the opposition and environmentalists say prime land in north-eastern NSW is still at risk of contamination and the company has been given too generous a deal.

The state government announced on Wednesday that it would refund nearly $262 million to Shenhua  in exchange for it handing back about 51 per cent of the exploration licence originally awarded by the previous state Labor government a mine encompassing the Liverpool Plains.

“There will be no mining on the fertile black soils of the Liverpool Plains,” he said.”The NSW government is acting to protect prime agricultural land.”

But Labor argues Shenhua should have its entire licence cancelled without any compensation.

Shenhua paid the former NSW Labor Government $300 million for the original exploration licence in 2008 which was later renewed. Opposition Leader Luke Foley said the past Labor government got that decision wrong.

“The entire proposal should be brought to an end,” he said. “There’s still a risk to the water table if mining should proceed.” 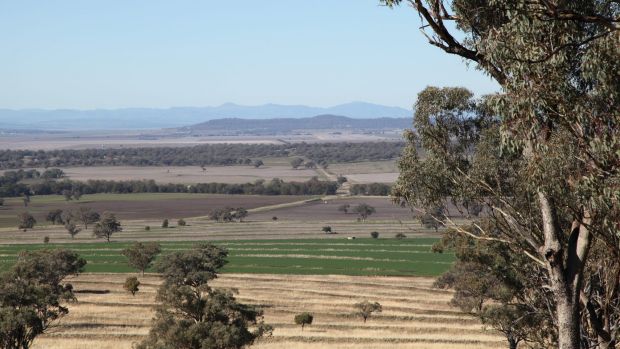 Liverpool Plains farmlands are set to be protected further from the activities of Shenhua.  Photo: Kate Ausburn

Labor argues no money should be returned to the company because it claims the company violated a contract clause that requires substantial exploration activity to have taken place during the duration of the licence.

“A quarter of a billion dollars to the company is unjustifiable corporate welfare,” Mr Foley said.

Mr Harwin said more work had to be done before he would consider whether any mining would be approved within the boundaries of the remaining scaled-back licence. Shenhua has not ever applied for a mining lease on the areas.

Mr Harwin denied the decision was about politics. It was met with muted enthusiasm by locals.

Twenty-nine-year-old Sarah Hubbard, who lives on a mixed broadacre cropping and cattle property on the Plains welcomed the announcement as recognition for the value of local land after a long fight, but said it would not end.

“The government should be commended,” she said. “Fifty per cent is better than what we had yesterday, which is nothing. But it’s not as though we’re going to lay down and let them have the rest”.

Maddy Coleman, 26, runs a cattle station at Blackville, through which the Plains run and said concerns about the effect of any approved future mine on the ridge and local water supply tempered any sense of relief in the community.

“It’s all interconnected; people in the ridge country use bores,” she said. “And where I live if we didn’t have bores we wouldn’t have animals.”

Shenhua – a state-owned corporation – has approval to explore the ridge lands, under strict water management arrangements and other conditions but it is yet to apply for any mining lease on any of the land.

Minister for Regional Water, Niall Blair, said any future mining would have to be governed by strict water management.

“Shenhua’s proposed activities on the ridge country have been exhaustively assessed and considered under the NSW Aquifer Interference Policy,” he said.

Liu Xiang, Chairman of Shenhua Australia expressed “disappointment” with the decision but said the company would continue exploration within the boundaries the truncated licence.

“The Watermark Coal Mine has been subject to unprecedented scrutiny which has demonstrated the project can be developed in an environmentally sustainable manner,” he said.

The mine caused heavy divisions within the federal Coalition government and had been condemned by the Nationals’ federal leader Barnaby Joyce, despite being given conditional planning approval by his government.

At its previous approval, the impact size of the proposed mine, located about 25 kilometres south-east of Gunnedah in north-eastern NSW, was larger than the City of Sydney.

The decision was angrily condemned by the Lock The Gate Alliance, a group opposed to mining near agricultural areas.

“We’ve been betrayed by the NSW government. If it was serious about protecting farmland, it would have cancelled the coal licence outright and stopped this coalmine,” Breeza farmer Andrew Pursehouse, whose property is near the proposed mine, said.

The NSW Greens condemned the decision and said the government must cancel the entire licence to ensure any potential future mining on the ridge does not extend to the Liverpool Plains.

“Anything less than full cancellation does not lift the threat,” mining spokesman Jeremy Buckingham said. “The idea that you can dig a 300-metre deep pit next to a flood plain and it will not impact on the water table is ridiculous.”

Up to 600 jobs would continue to be created under the deal, local MP Kevin Andrews said.

A second licence in the Liverpool Plains area, BHP’s Caroona project, was also bought back by the state government last year.