People who work on building infrastructure understand the risks of climate change. As the Earth warms, new stresses are applied to our buildings, bridges, roads, houses, and other structures. Some of the obvious threats to infrastructure are from extreme weather including heat waves, storms, and intense rainfalls. There are some other less obvious threats, and many of the threats vary by location.

Regardless, the planning for infrastructure relies upon a reasonable estimation of future climate changes. To help quantify such an estimate for the civil engineering community, a recent paper was published by the Institution of Civil Engineering Journal of Forensic Engineering (I was fortunate to be a coauthor). The article was prepared with the collaboration of Dr. Michael Mann from Penn State University and Dr. Lijing Cheng from the Chinese Institute of Atmospheric Physics.

The paper in question does not uncover new facts. We didn’t discover past warming that wasn’t known. We didn’t create new predictions that were previously uncreated. Rather, we assembled available information to provide a solid basis that can be used for future plans involving infrastructure.

The first thing we established was the long-term trend in the global temperature. While there are many groups around the world that collect global temperatures, two of the best known groups are NASA and NOAA. As shown in the data below, which I downloaded and graphed for the paper, temperatures have risen by about 1.4°C (approximately 2.5°F) from their low point circa 1900. Since scientists constantly argue against cherry picking; we used an average temperature over the 1880–1930 time period. Relative to that time, temperatures have risen about 1.2°C (1.8°F) 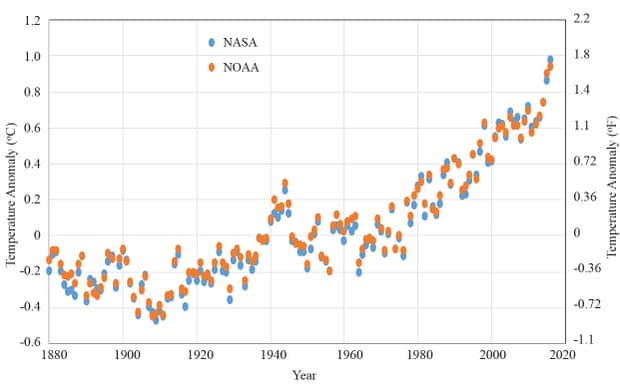 I have long argued and certainly continue to believe, that the surface temperature trend is not the best way to quantify warming. If you really want to measure global warming, you have to look in the oceans where the vast majority of heat is being stored. As I have reported here before, the oceans are telling a similar story – climate change is certainly happening. However, since we are not building infrastructure deep in the oceans, its temperatures are not very relevant for the present discussion.

What all this proves is that the Earth is warming. But civil engineers want to know what the Earth will be like in a decade, or two decades, or even longer. To predict that, you need other tools. You could make predictions based on the past temperature record of the planet or you could use computer simulations of the climate. But if you are going to use a simulation, you want to have some reassurance that the results are valid. So, the next thing we did in the paper was compare computer simulations of Earth’s surface temperatures with measurements.

The results are shown below. The figure shows four different data measurement sets and a range of model predictions (grey-shaded region). I’ve highlighted the temperature of 2016 with a red star; it’s slightly above the middle dashed line, which means it’s slightly above the average prediction of the models but certainly within the grey range. As you all know, scientists don’t really care whether one year is hot or another is cold; what we look at is the long-term trend. Clearly, the long-term trends are going up, whether you look at the measurements or the predictions. While it is too early to put the 2017 temperature into the graph, so far, it is almost exactly equal to the 2016 value. If that trend holds for the rest of the year, it will be another case where the models are running slightly too cold.