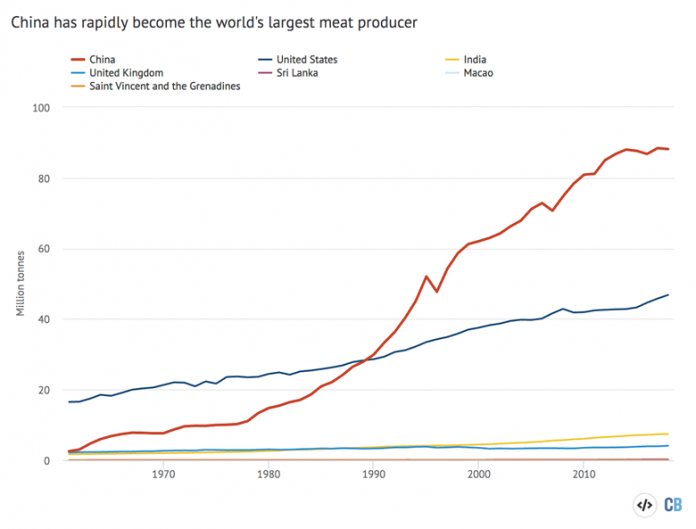 In the global north, the rise of plant-based meat, alongside disruptions in meat supply chains caused by Covid-19, has left some asking if the world is close to reaching “peak meat”.

But, in other parts of the world, meat consumption is accelerating like never before.

Meat consumption in low- and middle-income countries (LMICs) is continuing to rise as middle classes expand, with consequences for health, the climate and economies, both locally and globally.

The impact of this trend, if it continues in its current form, could dwarf the impact of falling meat consumption in North America and Europe.

This article is part of a week-long special series on how food production, consumption and waste are helping to drive climate change

Theory dictates that growth in meat consumption in coming decades will be driven by LMICs.

In economics, Bennett’s Law states that as incomes grow, consumption of nutrient-dense food products, such as animal meat and products, increase in the diet, while that of calorie-rich staple foods decreases.

Such consumption is driven by beliefs about the added nutritional value of meat, as well as other complex socio-cultural factors, such as the importance of meat as a historical indicator of status.

(In many low-income countries, farm animals are not considered as a direct food source, but as a form of wealth. From capital in de-facto loans to dowry gifts, farmed animals serve a value outside of just arriving on a plate as meat.)

The link between economic development and meat consumption appears to hold true for China.

In 1980, China’s annual meat production was around half that of the US’s. However, by 2018, it had quadrupled – far surpassing the US to become the largest meat producer in the world. Evidence shows that much of this meat is being consumed within China rather than being exported.

In addition, rapid economic development in other Asian countries has seen the region become the world’s largest meat producer. In 2018, Asia accounted for around 40-45% of total meat production. (Meat production in Asia has increased 15-fold since 1961.)

Meat consumption has also increased in central and South America in recent decades. Latin America and the Caribbean now ranks third in the world for the region with the highest proportion of red meat in the diet after North America and Europe, according to a study published in 2019.

Rising meat consumption is a major driver of global emissions. All food production currently accounts for a quarter of global emissions – with animal-based products responsible for the majority of these emissions. [Earlier this week, Carbon Brief published an in-depth Q&A on the climate impacts of eating meat and dairy.]

History suggests that, as LMICs continue to develop, their levels of meat production are also likely to increase.

The latest agricultural projections from the Organisation for Economic Co-operation and Development (OECD) and the UN’s Food and Agriculture Organization (FAO) find that the global expansion in meat supply is expected to increase by 40m tonnes by 2029, when compared to levels from 2018-19.

The report says that “developing countries are projected to account for most of the total increase in production”.

It projects that per-capita increases in meat consumption in developed countries will be 0.24% per year – around a quarter of the annual growth rate of the preceding decade.

However, in developing countries, growth in meat consumption is expected to be 0.8% per year, which is double that of the preceding decade.

The slowdown in meat-eating in developed countries can be partly attributed to a popularisation of “plant-based” lifestyles.

However, Bennett’s law suggests these trends are not necessarily likely to catch on in LMICs. In many of these countries, increased meat consumption is still aspirational, diets are more grounded in traditional culinary traditions and “alternative protein” is already a staple of the diet.

For example, in China, vegetarian diets are historically associated with Buddhism. While western consumers may find products like the faux meat “Impossible Burger” innovative, imitation meat has existed in the Chinese and broader eastern Buddhist diaspora in Asia for many centuries.

Such products in China, which are often served in high-end restaurant settings, imitate meat not only as a protein source, but in texture, aesthetics and taste.

KFC and Starbucks have both recently launched plant-based menu items in China. However, these products have seen mixed responses and the jury is out on whether these kinds of products will trickle down to the consumption patterns of the larger population.

In addition, some national pundits have argued against efforts to reduce meat-eating in China on the basis that meat should not be an “exclusive privilege” reserved for western countries.

In China and other Asian LMICs, innovations in meat production could have a greater potential to reduce total meat emissions than changes in demand.

Use of autonomous monitoring of animal health and optimising feed are both current technologies that are attracting investment and interest from industry in this part of the world. In China, the application of agricultural technology is central to key government strategies.

These innovations could help to optimise animal production by cutting waste and its associated carbon footprint. However, it should be noted that there are animal welfare concerns attached to some of these technologies.