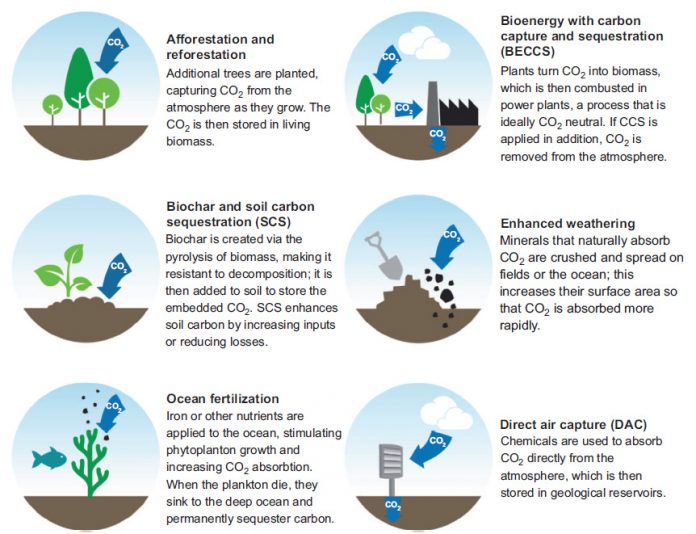 But investing time and money in CO2 removal is potentially a risky business and the mere act of proposing it might reduce incentives to cut emissions in the first place.

With research on CDR increasing exponentially and governments getting increasingly interested, engaging with the public early on in technology development is vital, for both ethical and pragmatic reasons.

With my Cardiff University colleagues Dr Elspeth Spence and Prof Nick Pidgeon, we ran a series of surveys and focus groups in the US and the UK to understand public perceptions of CDR cross-nationally.

Our paper, published in Nature Climate Change, shows that a new public discourse of climate urgency in both countries is impacting attitudes towards the latest CDR ideas.

CDR techniques range from well-established options, such as planting trees and ecosystem restoration, to highly novel “engineered” technologies, such as direct air capture (DAC) and bioenergy with carbon capture and storage (BECCS). It is this latter category that we were primarily interested in.

Research on CDR tends to focus on issues such as technical feasibility and cost. These are vitally important, but decades of research has shown us that this is only half the puzzle: to understand the real-world potential of these proposals, we must also understand people and society.

Public attitudes influence political mandates and sometimes even determine whether a technology succeeds or fails. Yet we also engage with the public because it is the right thing to do – technologies impact people’s lives, therefore it’s important that we listen to their opinions and their concerns.

That is partly why this type of research is so exciting. Engaging with the public early on in the process allows us to use their insights to inform technology development. They can help us to identify the key knowledge gaps, to focus our attention in areas where there is a strong societal mandate and to avoid or mitigate high-risk activities.

In the most extreme cases, deep and widespread public rejection of a technology would mean that scientific research efforts would be better spent elsewhere.

We surveyed 1,000 people in the UK and 1,026 in the US, using quotas to make sure the samples were nationally representative, and ran evening-long deliberative workshops in six locations: Chicago, Champaign-Urbana, and rural Illinois in the US, and Cardiff, Norwich and rural Norfolk in the UK.

The joint approach is particularly important where there is low prior awareness. In this instance, less than 10% of survey respondents said they knew at least “a fair amount” about CDR.

Our study compared the US and the UK. The bar charts below show the survey results for seven questions (A to G) regarding the risks (upper charts) and benefits (lower) of CDR.

Responses were quite similar across both countries, with no significant difference in responses to the risk perception questions. However, we did find slightly higher levels of benefit perception in the UK, which was partly due to a higher degree of climate change concern.

Overall, our study showed that CDR encounters a strong “temporal dilemma” in people’s minds – it is both too short-term and not short-term enough.

This is because climate change is now perceived as immediate and urgent, connected to people’s real-life experiences of extreme weather, yet people are well aware that technology development takes time. Participants were sceptical that it would be possible to develop these technologies, carefully and with adequate testing, within the required timescale.

Yet CDR was also seen as a “non-transition” in the long-term – it just did not fit with people’s visions for a sustainable future society.

One survey question in particular, “CDR will buy time to reduce emissions”, received significantly more agreement in the UK than the US. (This analysis was cut from the final paper for space reasons, but did pass peer review).

From the conversations in our workshops, we surmised that this might be because UK participants were generally more optimistic about future climate action – they felt that recycling rates were increasing and that young people are more aware and more pro-environmental. In the US, many people felt the opposite – and if you’re unconvinced about future action, why bother buying time?

Support for CDR will depend on climate change mitigation in a broader sense. As one participant put it : if CDR allows us to carry on the way we have been, “it’s a lose-lose”.

The workshops explored in depth how people might respond to the three individual CDR technologies of BECCS, DAC and enhanced weathering.

BECCS was, generally, the most preferred of the three, because people are familiar with the process of capturing CO2 from plants and associated it with “naturalness”.

In line with previous research, storing CO2 underground (the carbon capture and storage component of BECCS) was more opposed than the biomass component. However, participants also asked why we had to burn the plants at all: why can’t we just plant trees and protect the rainforests?

In a pilot workshop, we had included afforestation as a CDR option for discussion, but removed it because it was having a negative biasing effect on perceptions of the other CDR options. This is partly because of the difficulty of communicating the sort of scale which would be required for tree-planting: on a small island such as the UK, comparisons like “the size of China” are basically meaningless.

In the actual workshops, where we deliberately avoided introducing the idea of afforestation, it was mentioned unprompted by our participants. People see forests as mirroring nature and therefore having lower risks of unintended consequences, as well as being less likely to reduce incentives to cut emissions. Therefore, including afforestation as an option might reduce support for other CDR options, which might be more novel and unfamiliar, but which have the potential to sequester more CO2 for a longer time period.

Public responses to DAC were generally more muted. Some participants said they liked the simplicity of it – as well as the lower land requirements – but others said that it felt too industrial.

DAC is currently expensive and there were concerns about cost for all three technologies, with some (especially in the US) worrying that energy bills might go up to pay for it. Yet others argued that cost is used as an excuse not to act and pointed to bailouts for major banks after the 2007-08 financial crisis as an example of money being made available when needed.

We found that the main issue for DAC may relate to engagement and understanding, because capturing CO2 from ambient air is not familiar or intuitive. Many participants perceived it as an air pollution measure, which makes sense when you consider that images of smoke and particulate pollution are often used in the media to portray climate change. This means that units sited in less polluted areas might encounter some scepticism about the goal of the project.

The workshop participants initially disliked enhanced weathering more than the other proposals discussed. People thought it would be industrial and would require heavy machinery. They did not see it as fitting with their idea of how climate action should look.

Participants generally rejected the idea of opening new mines for the rock resource and became more favourable when the possibility of using by-products from existing mines was raised.

One of the concerns among participants was that there are currently “too many ‘mights’” – in other words, we need to do more research to reduce scientific uncertainties, particularly around plant, soil and water interactions.

However, some aspects are harder to test than others. Enhanced weathering aims to sequester CO2 as stable bicarbonate in the ocean, but people felt sceptical about the possibility of accurate and controllable ocean testing. Research shows that people have a strong emotional attachment to the ocean; therefore, any impacts on ocean ecosystems may constitute a “red line” for the public.

This study should help us to understand how people may react to engineered CDR proposals. Of course, it is early days – views will be liable to change and the ways in which particular projects and programmes are carried out will be crucial.

For researchers, the important part now is to ensure that societal understandings can play a meaningful role in technology research and development moving forward. Above all, while CDR research under well-controlled conditions is likely to be acceptable, significant at-scale deployment without a corresponding major effort to deliver emissions reductions would currently appear to represent a red line for many people.

The post Guest post: How public attitudes towards ‘CO2 removal’ differ in the UK and US appeared first on Carbon Brief.