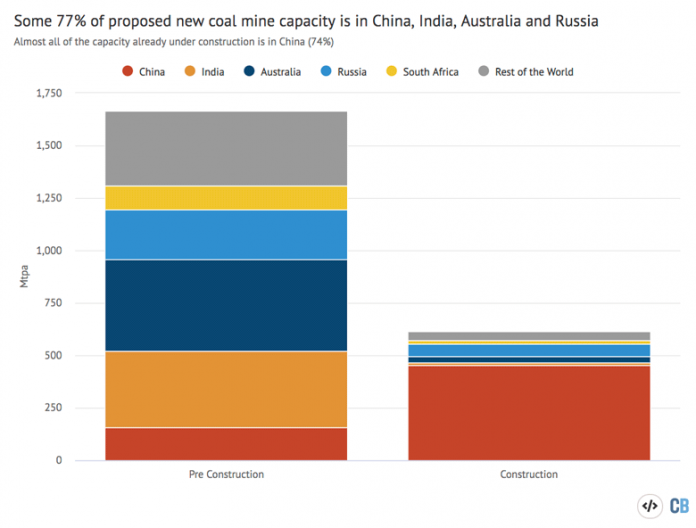 Proposals to build hundreds of new coal mines could raise global output of the fossil fuel by 30%, putting the world’s climate goals or up to $91bn of investment at risk.

Those are the key findings of Global Energy Monitor’s first comprehensive survey of global coal mine proposals, based on data from our new Global Coal Mine Tracker.

We found more than 400 new mine proposals that could produce 2,277m tonnes per annum (Mtpa), of which 614Mtpa are already being developed. The plans are heavily concentrated in a few coal-rich regions across China, Australia, India and Russia.

If they all went ahead, the new mines could supply as much as 30% of existing global coal production – or the combined output of India, Australia, Indonesia and the US.

Yet last month, the International Energy Agency said no new coal mines – nor extensions of existing mines – were “required” in its pathway to 1.5C. A UNEP report last year said coal output should fall 11% each year to 2030, under the same target.

Plans to massively boost coal production are, therefore, incompatible with the 1.5C limit. Alternatively, if global climate goals are to be met, the estimated $91bn of investment in the proposed mines could be left stranded.

The new Global Energy Monitor Global Coal Mine Tracker (GCMT), launched in June 2021, is a comprehensive database of the world’s active and proposed coal mines.

The GCMT includes all operating mines that produce more than 5Mtpa – some 433 mines in total, accounting for around 60% of total global output. By 2022, it will also cover existing mines of at least 1Mtpa, expanding coverage to 1,800 mines and over 90% of output.

The tracker lists mines by country, region, greenhouse gas emissions and ownership. It also covers all proposals of at least 1Mtpa, amounting to 432 developments across 413 sites.

To track new proposals, our researchers sourced an initial project list of every announced, explored, permitted and under construction coal mine around the world.

We then assessed each proposal, weeding out older and shelved projects from those that have signalled ongoing progress or movement in the past two years.

We judged active progress on a case-by-case basis: was a project meeting permitting deadlines? Were companies still reporting activity on the project? Were they still listing it in their annual reports? Did communities on the ground report activity at the mine site?

We considered a project shelved and removed it from the list if it went dark after two years – for example, if it had been scrubbed from a company website, lapsed in permitting, or was struggling and failing to gain financing.

We set a capacity threshold of 1Mtpa or greater for proposals in the GCMT. This screened out smaller projects and life extensions that would prolong a mine’s operation, but not increase its output.

The capacity threshold also excluded the most pie-in-the-sky announcements that lacked even the basics of a mine plan – a necessary precondition to estimate recoverable reserves, operating costs and to satisfy potential investors.

Our final list tallied 432 active coal mine proposals and mine expansion projects around the world, totalling 2,277Mtpa of new capacity.

Where are the new mines?

The 432 mine proposals, representing 2,277Mtpa of potential new capacity, are highly concentrated in just a handful of coal-producing countries and regions.

This is shown in the chart below, which also highlights the fact that nearly three-quarters of capacity already under construction is located in China.

The concentration of coal mine proposals perpetuates the broader trends in coal production over the past five years. with production in China, India, Australia and Russia steady or rising, even as it declines in many historic coal producers, such as the US, UK and EU.

But the national view masks the origins and density of these mine projects.

The fast-paced build out in China, which leads the world in new mine developments, is driven by just four provinces: Inner Mongolia, Xinjiang, Shanxi and Shaanxi. These provinces alone account for 89% (544Mtpa) of all the proposed capacity in China.

The same is true for new mine developments in Australia, India and Russia, where mining activity is heavily clustered in traditional coal-mining regions, shown in the chart below.

Queensland, Australia has more coal under development than any subnational state or province in the world (357Mtpa), bolstered by an assortment of projects in the Bowen and Galilee Basins.

Meanwhile, the bulk of India’s proposals are sited in just three states: Jharkhand (161Mtpa), Odisha (112Mtpa) and Chhattisgarh (40Mtpa), which together comprise 77% of all the coal development in South Asia.

Similarly, the coal-rich Kuznetsk Basin (Kuzbass) in Kemerovo Oblast, comprises over one-third (105Mtpa) of all new mine proposals in Russia.

Unlike China, where 74% of planned projects are already under construction, the vast majority of proposed mining capacity in Australia (94%), India (96%) and Russia (80%) is in the earlier pre-construction phases of development.

These schemes have yet to undergo the build-out of mine infrastructure, making them particularly vulnerable to cancellation.

Who is planning new coal mines?

Looking at the 2,277Mtpa of proposed new coal mining capacity in terms of ownership, some 388 state-owned enterprises and private companies are involved.

In China and India, the majority of the world’s proposed coal mines are sponsored by state-owned enterprises, wholly or partially owned by the government, meaning taxpayer money continues to subsidise mine projects to fuel provincial and state economies.

Yet even private coal companies remain committed to new projects, despite market headwinds. Our data shows that among private developers, small and independent firms are showing a greater appetite for new mine projects than multinationals.

This is not to say the largest producers have opted out, with major firms still invested in new developments worldwide. But it is notable that several small and medium firms – especially in Australia – have elbowed their way into a list of the top 10 developers, shown below.

Around two-thirds of the proposed projects, some 298 mines, would be “greenfield” developments at new locations, as opposed to expansions of existing sites.

The trend is apparent worldwide: among the largest producers, only Russia has more expansions on the books than greenfield projects.

While there are prominent cases of resistance to new greenfield mines – such as the Adani Carmichael mine in Australia – many in our dataset have flown under the radar.

In part, the size of these projects seems to have created a “Goldilocks” effect: most are in the mid-range, neither very large nor very small, with a median capacity of 3.5Mtpa.

At this size, they are less vulnerable to the intense public scrutiny typically associated with coal megaprojects, while also being shielded from near-term consolidation and closure schemes, especially in China and India, where national governments have signalled plans to reduce the number of small mines in their portfolios.

Even more striking is that new thermal coal mines dominate development plans, despite coal-fired power generation having been in decline since 2018.

Where coal type is known, thermal coal accounts for 71% of the planned capacity we identified, while metallurgical coal for steelmaking accounts for 20% and mixed for 9%.

(In North America, the numbers are reversed, with metallurgical coal for steelmaking accounting for 70% of proposed capacity.)

Despite political, social and economic pressures on the coal industry, current production levels and the number of new mine proposals suggest the world is not on course to phase out coal fast enough to avert the worst impacts of global climate change.

The metric of a “production gap”, first developed by the UN Environment Program (UNEP) and several partners in 2019, shed light on the discrepancy between planned fossil fuel production and the reductions required to meet the Paris climate agreement.

The Production Gap Report estimated that coal production would need to decline 7% annually under a “well below” 2C pathway and by 11% for 1.5C.

Our Global Coal Mine Tracker extends this analysis by providing asset-level coal mine data to compare against Paris-compliant pathways.

If all 2,277Mtpa of proposed coal-mining capacity were to open, then output in 2030 would be three times the level in UNEP’s 2C pathway and four times as high as for 1.5C.

Even if only the mines currently being built are developed, coal output in 2030 would remain three times above the level in UNEP’s 1.5C pathway.

This is shown in the chart below, where historical coal output (black) is projected forward assuming all coal mine proposals are developed by 2030 or only those already under construction are built (shades of red) or in pathways for 1.5C or 2C (blue).

Historical global coal output, Mtpa (black) and projections assuming all planned projects go ahead or only those currently being built (red, pink) relative to pathways for 1.5C or 2C (blue). The projections account for 306Mtpa of capacity from mines expected to close or exhaust their reserves before 2030. They assume proposed capacity opens evenly across the years to 2030. Sources: Historic data from BGR Energy Study 2019, planned and construction from the Global Coal Mine Tracker and pathways for 1.5C or 2C from UNEP’s 2020 Production Gap report. Chart by Carbon Brief using Highcharts.

Our asset-level projections are comparable to those in UNEP’s global forecast, as well as the “middle of the road” coal production scenario used in IPCC model pathways.

The pursuit of the new coal-mining projects we identified could waste billions of dollars in capital expenditures or make international climate goals unattainable.

If all proposed capacity in our tracker is realised, coal production could reach 10,100Mtpa by 2030 – more than four times the 2,400Mtpa in UNEP’s 1.5C pathway and around three times the 3,600Mtpa in its “well-below” 2C scenario.

Notably, the total of new coal-mining capacity that we identified, at some 2,277Mtpa, is close to the 2030 limit in UNEP’s 1.5C pathway, suggesting almost all existing mines would need to close this decade if the proposed projects are fully developed.

Alternatively, the sponsors of these new coal mines face significant stranded asset risk. If planned coal mines open as intended, but are forced to lower production levels or shut down early, we estimate they represent up to $91bn in stranded assets, based on the average capital costs to open a coal mine.