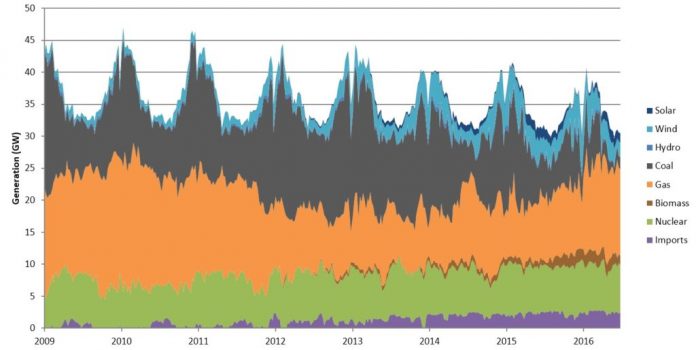 Dr Aidan Rhodes is a research fellow at Imperial College London and is part of the Energy Futures Lab team, working on delivering their Briefing Paper series.

In recent years, as the large-scale deployment of renewable generation gathers pace and the contribution of conventional power generation (gas, coal and nuclear) to electricity supply dwindles, popular concern over grid stability and reliability has grown substantially.

It is not uncommon to see stories in the British press every autumn warning of low capacity margins and worrying about “the lights going out” over the winter.

In South Australia, concerns over high levels of renewables causing grid instability at times of summer peak demand, combined with a couple of large-scale power cuts, have led the state government to propose investing directly in battery storage and a gas-fired power plant.

In the US, there has been substantial political pressure over the role of coal in the electricity system, leading to energy secretary Rick Perry to order a study on grid reliability and baseload power, which led to a controversial rule from the US Department of Energy allowing conventional generators to receive costs from suppliers to remain available, even when they are not required by the market. (Baseload power is a somewhat controversial term; conventional or thermal generation are often used instead).

So, what has been happening? Are electricity grids getting less reliable as renewable percentages increase? Should countries and regions be investing in significantly more conventional generation to provide reliable backup?

We have recently produced a briefing paper focusing on whether the UK is facing an upcoming electricity crisis, with the aim of investigating whether the wide levels of concern seen over the past few years are justified.

We found several interesting findings, directly applicable to the UK, but of interest more widely to those countries facing similar concerns.

In the traditional model of a national electricity system – widely used for more than 50 years – large conventional gas, coal and nuclear generation plants supply large centres of demand. Power generation is then adjusted upward and downward, or additional power stations brought on line, to meet the changing pattern of demand.

In this approach, demand is completely passive, meaning that balancing the system is solely the responsibility of the supply-side. This makes the gap between predicted peak demand and available supply – known as the “de-rated capacity margin” – the most important metric for analysing the security of the system. (“De-rated” in this case means that the capacity is rated based on the percentage of time it can provide power, taking into account outages).

Security of supply – the ability of the system to supply the available demand – is paramount and can only be improved by providing more capacity in the form of extra power stations.

However, electricity systems are in a period of rapid evolution. More generation is being installed at the distribution network level – chiefly, solar PV and smaller wind generation. Greater levels of interconnection are being developed across regions, allowing electricity grids to access more diverse supplies. Demand-side response and aggregation services are being offered by larger quantities of industrial and commercial users, and the roll-out of smart meters should allow domestic users to participate in the future. Energy storage is dropping quickly in price and installations are increasing rapidly.

These technologies and services are increasingly allowing the system to be balanced in ways other than increasing or decreasing supply. It is, therefore, more useful nowadays to look at grid reliability holistically, as a matter of electricity security instead of security of supply. (The US Department of Energy recently introduced the ill-defined concept of grid resiliency.)

Looking at the system in this way calls into question the way we assess security. With more options available to balance the grid, is a large capacity margin as important as before? Should we be building more reserve power stations, or are there other ways to keep the grid balanced?

We looked at the case study of the UK over the last few years, during a period of very low margins, to explore these questions.

The peak demand in the UK occurs during the winter period, as extra demand for heat and light put more pressure on the system. Over the last few winters, the capacity margin has dropped substantially, from approximately 17% in the 2012/13 winter to just over 1% over the most recent winter, 2016/17.

During this time, there were no significant blackouts in the UK caused by a lack of supply, with the system remaining secure. As the figure below shows, there was a substantial shift in how the UK generated its electricity during this time, with coal generation falling almost to nothing from an average of 15-20 gigawatts (GW) in 2013, and wind and solar have increased markedly.

Between June and September this year, over half the UK’s electricity was provided from renewable sources. Gas generation has filled a lot of the gap left by coal, rising over 50% since 2013 (though it remains below a 2010 peak). Interconnectors have also been providing a larger share of the UK’s electricity. 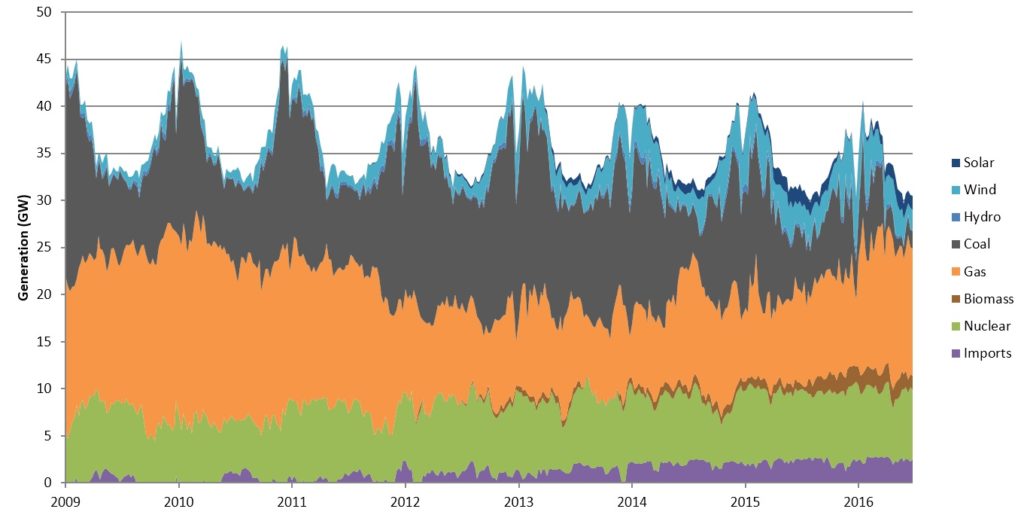 So, why did the capacity margin drop so low? And what actions were taken in response?

The sharp drop from 2012/13 was caused by the EU’s Large Combustion Plant Directive forcing older coal (and a few gas) plants to close or limit their hours. In addition, the rapidly dropping price of natural gas combined with a strict carbon price floor often made coal plants uneconomic to run.

In response, National Grid introduced the Supplemental Balancing Reserve, which paid some older power plants to remain available to generate in case of a shortfall in supply instead of closing or being mothballed. This scheme ran for three years, from 2014-17, and raised the capacity margin to 5-6% over this period, as can be seen in the figure below. Though the reserve was available, it was never called on to generate, and the scheme closed in 2017.

In its place is the capacity market, which will begin operating in the UK from this winter. This is an auction-based market in which conventional generation, along with interconnection, storage and demand response, bid to provide guaranteed capacity over the winter period. Auctions take place four years in advance to allow time for new power stations to be built, and have now been completed for the winters up until 2020/21. Sufficient capacity has been procured to cover anticipated peak demand until then.

The latest forecasts from National Grid predict the upcoming winter will have the largest margins since 2012. It, therefore, continues to be unlikely that we will see blackouts caused by lack of supply in the UK in the next few years.

The capacity market has been criticised for enabling older coal power stations to stay on the system and for incentivising the use of polluting smaller diesel generators embedded on the distribution networks, which have not needed to pay system access charges and have, therefore, underbid larger plant.

Is extra conventional capacity the best way to balance the system in an age of increasing renewables?

It is likely, in the near-to-medium term, that there will be a need for some quantity of flexible conventional power plants to be available in case of a shortfall in overall supply. However, it is far from certain that simply increasing capacity margins through extra supply is the most economic or lowest-carbon option. It also carries the risk that new power stations will be built and then barely used as the system evolves.

We find in our paper that increasing the diversity of options available to balance the system, incorporating demand response, storage and interconnection, has the potential to provide electricity security at a lower cost, both in money and in carbon, than simply increasing supply margins. In short, the UK’s electricity system is evolving quickly and the way we are considering electricity security should evolve as well.