Home Science Sea Level Guest post: Why does land warm up faster than the oceans? 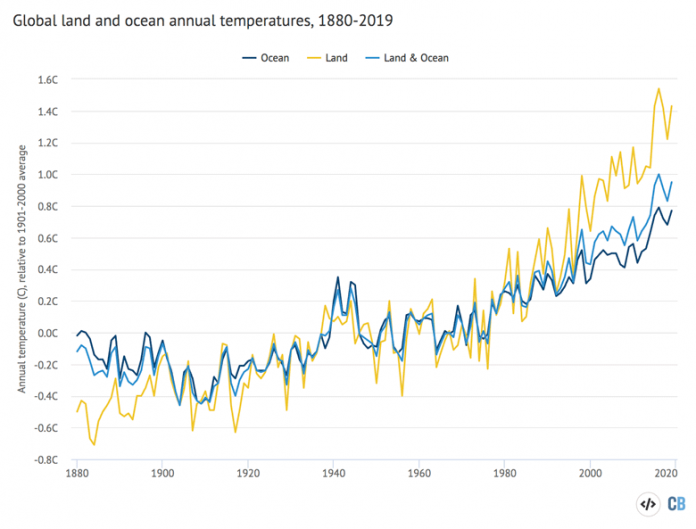 Last year, global temperatures were 0.95C warmer than the 20th century average. Human activity is responsible for around 100% of this warming.

Delving a little deeper into these figures shows that the Earth’s land areas were 1.43C warmer than average, while the oceans were 0.77C warmer. This is evidence of how the world’s continents have warmed more rapidly than its oceans over recent decades.

This contrast between land and ocean temperature change will strongly shape the global pattern of future warming and has important implications for humans. We are, after all, a species that much prefers to live on land.

But what drives this warming contrast? It’s a deceptively simple question, but one with a much-misunderstood answer. In this guest post, I outline a robust, quantitative theory for the land-ocean warming contrast that has only been developed in recent years.

Simple physics suggests that when you put more heat into the climate system, land should warm more quickly than oceans. This is because land has a smaller “heat capacity” than water, which means it needs less heat to raise its temperature.

The chart below shows how the Earth’s land surface (yellow line) has warmed more rapidly than the ocean (dark blue) over the observational record.

This effect can also be seen in different parts of the seasonal climate system. For example, as the sun moves north of the equator during the northern hemisphere spring, its energy rapidly heats India relative to surrounding oceans. This contrast in heating plays a key role in the reversal of winds that drives the South Asia monsoon.

Land’s small heat capacity also helps to explain why some continental regions, such as Russia and the central US, can get very hot in summer yet bitterly cold in winter. This is known as “continentality”.

Given its central role in the seasonal land-ocean warming contrast, heat capacity is the natural starting point when attempting to explain why continents warm more than oceans under climate change. But there is a problem with this explanation.

In a landmark 1991 paper, meteorologist Syukuro Manabe and his colleagues used an early climate model to compare the transient response of the climate system to gradual increases in CO2 to the long-term equilibrium response.

In other words, they were comparing the climate while CO2 was increasing with the climate once CO2 had stopped rising and the climate had eventually stabilised at its new, warmer state.

If the difference in heat capacities between land and oceans was the decisive factor controlling the warming contrast, we would expect the contrast to disappear at equilibrium once the oceans have had sufficient time to warm up.

But this is not what Manabe found. Instead, he discovered that the ratio of land to ocean warming (now known as the “amplification factor”) was similar in both the transient and equilibrium experiments.

This was evidence that the land-ocean warming contrast – highlighted in the map below of projected warming for the end of this century – is a fundamental response to climate change that is not controlled by heat capacity. If heat capacity cannot explain amplified land warming in a changing climate, what can?

Climate model projection of the change in near-surface temperature by the end of the 21st century (2080-2100) relative to the historical period (1980-2000). Data from the GFDL-CM4 model under the fossil-fueled, high emissions SSP58.5 scenario; chart by M Byrne.

The first explanation, initially put forward by Manabe, invokes the surface energy balance. This describes the exchange of energy between the Earth’s surface and the atmosphere above it.

When atmospheric CO2 concentrations increase, radiation into Earth’s surface increases causing temperatures to rise. This is because a larger amount of the heat radiated by the Earth’s surface is being trapped by greenhouse gases in the atmosphere.

But the extent of this CO2-induced surface warming depends on how much is balanced by localised factors that cause cooling – namely, cooling caused by evaporation and cooling due to the exchange of dry heat between the land surface and the air above it. (The atmospheric warming caused by the latter also tends to inhibit cloud formation and, thus, can cause further drying of the land surface.)

Oceans – which have unlimited water to evaporate – can efficiently cool themselves in a warming climate by evaporating more and more water with only a small temperature increase. Continents, on the other hand, typically have limited moisture availability and so evaporation is constrained.

This means that, over continents, more of the extra radiation going into the surface in a warming climate needs to be dissipated through the exchange of dry heat and longwave radiative cooling, rather than evapotranspiration. This implies a larger increase in surface temperature compared to the freely evaporating oceans.

This “surface energy balance” theory for the land-ocean warming contrast has also been put forward in more recent studies.

This explanation for amplified continental warming is intuitive and hints at a key role for land “dryness” in determining the temperature change. But it needs to be supported by hard numbers.

An issue with the surface energy balance theory is that it relies on properties of the land surface – which are varied, complex and notoriously difficult to simulate – in order to be accurately represented in climate models. In particular, quantifying how evapotranspiration will respond to a changing climate – the key ingredient of the surface energy balance theory – requires knowledge of regional soil moisture and vegetation and how these properties themselves change with climate. A difficult task.

Moreover, factors in the overlying atmosphere are also important: how will rainfall and winds change? The myriad processes influencing land surface energy balance mean that using this framework as a basis for a quantitative theory for the land-ocean warming contrast is challenging. Although the perspective is conceptually useful, it provides an incomplete understanding of the physics driving the warming contrast.

Rather than surface energy balance, atmospheric dynamics – the motion of the atmosphere and its thermodynamic state – underpin a new understanding of the land-ocean warming contrast that has developed over the last decade.

In a 2008 paper, Prof Manoj Joshi – then at the Met Office Hadley Centre and the University of Reading and now at the University of East Anglia – was the first to point out that dynamical processes in the atmosphere connect temperature and humidity over land and ocean regions.

Specifically, he showed that the lapse rate – the rate of decrease of temperature with height – decreases more strongly over ocean than over land as climate warms. This is because the air above the ocean is, at any moment in time, typically holding more water vapour than the air over land.

This mechanism is not necessarily intuitive, but relies on well-established processes in atmospheric dynamics. Differing lapse rate changes are now accepted as the fundamental driver of the land-ocean warming contrast, particularly at low latitudes (up to approximately 40N and 40S). Amplified warming in regions including the Mediterranean are also explained by the same lapse-rate mechanism.

With his 2008 paper, Joshi introduced a new conceptual understanding for the land-ocean warming contrast. But, again, the explanation was qualitative.

Together with Prof Paul O’Gorman from the Massachusetts Institute of Technology, I realised that the lapse rate argument could be extended and developed into a quantitative theory.

The key insight was that although changes in temperature and humidity over land and ocean are very different, the atmospheric dynamics constraints identified by Joshi imply that changes in a particular combination of temperature and humidity – specifically, the energy contained in a parcel of air at rest, a quantity known as moist static energy – are approximately equal. This insight allowed us to derive an equation for the land temperature change, which we published in 2018.

What our equation shows is that the response of land temperature to climate change depends on two factors: ocean warming and how dry the land is in today’s climate.

The drier the land is, the more it warms. The theory has been verified in climate models and using observational data over the past 40 years. The theory explains why land warming is expected to be particularly severe in dry, arid subtropical regions and also explains why relative humidity over land has been decreasing over recent decades.

An important implication of the theory for projections of future land temperatures (which vary considerably across models) is that it is crucial to accurately model how dry land is in the current climate, but this is technically tricky due to the complexities of land surfaces.

This new understanding of the land-ocean warming contrast has been well received by the atmospheric dynamics and climate dynamics research communities.

But it would be fair to say that it is still not well known in the broader climate science and climate impacts communities that the land-ocean warming contrast is driven by dryness rather than differences in heat capacity.

And it is certainly not well known in the public sphere. In terms of the theory itself, some researchers find it surprising that the complexity of land surfaces can be subsumed into a single “dryness” parameter.

I also find it surprising and inspiring that the response of a system as complex as continental climate can be boiled down to a simple equation. I would advocate for more of this kind of conceptual research in climate science.

The post Guest post: Why does land warm up faster than the oceans? appeared first on Carbon Brief.