Home News Carbon Brief Guest post: Why results from the next generation of climate models matter 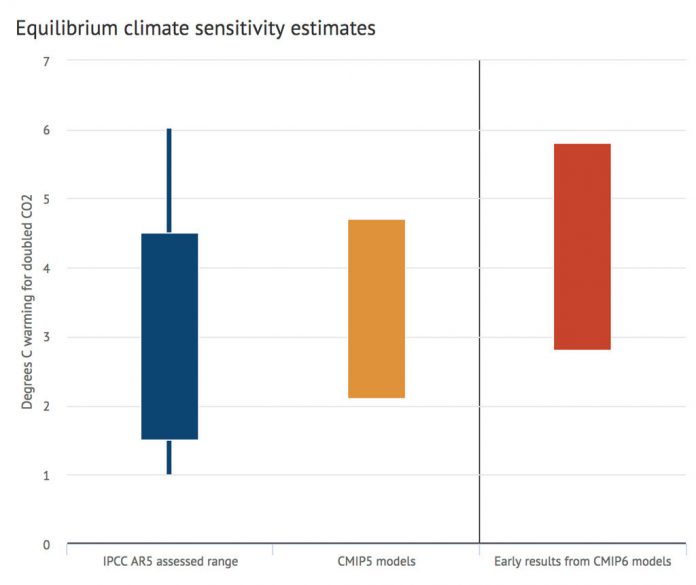 The first results from a new generation of global climate models, which are valuable tools for understanding climate change, are now becoming available from climate research centres around the world.

These new climate models make maximum use of advances in technology – such as increased supercomputing power – and feature many improvements in their treatment of Earth’s climate system. These include better representation of the weather systems that bring us wind and rain, the clouds within those weather systems, and aerosols – the myriad of small particles in the atmosphere that come from natural sources and human activities.

An unprecedented amount of information is available from the new models about the changing character of weather processes in a changing climate, which is important for understanding our exposure to climate hazards and how to make society more resilient to climate change.

Many of the new models from centres around the world have been recently finalised, with others due to be completed over the coming weeks. They will be included in the next international comparison of climate models, known as the sixth “Coupled Model Intercomparison Project” (CMIP6). This will provide the foundation of climate model information for the Intergovernmental Panel on Climate Change’s (IPCC) sixth assessment report (AR6) – which is due to be published in 2021.

From an international policy perspective, an important function of climate models is to provide evidence for estimates of the permissible global greenhouse gas emissions available to stay within a given level of global warming. This is known as a global “carbon budget” and varies in size according to the temperature goal in question and the defined likelihood of staying below these thresholds.

The climate agreement signed by governments in Paris in 2015 aims to keep global temperature rise this century to “well below” 2C above pre-industrial levels and to pursue efforts to limit the temperature increase even further to 1.5C.

A key factor in determining carbon budgets is how sensitive the Earth’s climate system is to increases in CO2. One measure of the long-term response of the climate over hundreds of years is known as the “equilibrium climate sensitivity” (ECS), which is defined as the temperature increase when CO2 has doubled and the climate system has come into equilibrium. The higher the ECS is, the smaller the remaining carbon budget has to be to meet a particular climate target.

Early results suggest ECS values from some of the new CMIP6 climate models are higher than previous estimates, with early numbers being reported between 2.8C (pdf) and 5.8C . This compares with the previous coupled model intercomparison project (CMIP5), which reported values between 2.1C to 4.7C. The IPCC’s fifth assessment report (AR5) assessed ECS to be “likely” in the range 1.5C to 4.5C and “very unlikely” greater than 6C. (These terms are defined using the IPCC methodology.)

The chart below shows how the early estimates from the CMIP6 models (red bar) compare with the CMIP5 models (yellow) and the assessment of ECS range from AR5 (blue). It should be noted that the CMIP6 range is preliminary and could change as more modelling centres publish their results. 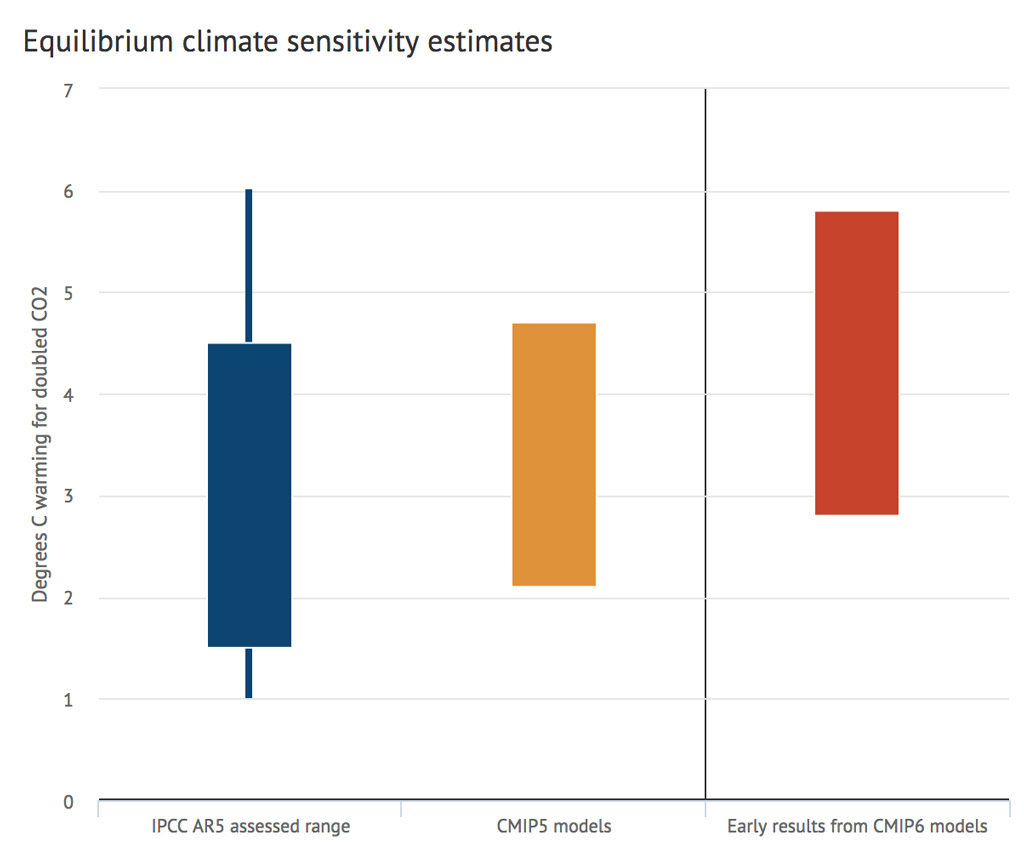 The IPCC estimates its assessed range of ECS through multiple lines of evidence, including the following:

Climate scientists will need to assess how new understanding of ECS from the various lines of evidence compares. They will all be considered by the IPCC for AR6 due in 2021.

The chart below shows an assessment of climate sensitivity estimates published since the year 2000. Each dot shows the best estimate of ECS from an individual study, while the bars show the range of possible values found by that study. The colour indicates the type of study. The dark blue bar on the right-hand end shows how the early CMIP6 estimates compare.

The next step is for climate scientists to understand in detail why some of the new models are showing this shift in ECS – and how this fits with other lines of evidence. This includes looking at other measures of sensitivity, including “transient climate response” (TCR), which measures the rate of warming.

TCR is defined as the temperature increase at the instant that atmospheric CO2 has doubled, following an increase of 1% each year. This measure is arguably more useful for looking at changes we might expect over the current century, as it deals with shorter timescales than ECS.

The international community of scientists working on this new generation of climate models meets together for the first time next week from 25-28 March in Barcelona at the CMIP6 model analysis workshop. This has been organised under the auspices of the United Nations World Climate Research Programme (WCRP). It is an exciting opportunity for modelling centres to compare notes about the performance of their models and for the community to start thinking about the implications of this new rich seam of information for climate policy, including causes of past climate change and projections of likely future rates of change.

If it turns out that there is enough evidence to corroborate the higher ECS values from new-generation climate models then there would be important implications for carbon budgets. A higher ECS means a greater likelihood of reaching higher levels of global warming – even with deeper emissions cuts. Higher warming would allow less time to adapt and mean a greater likelihood of passing climate “tipping points” – such as thawing of permafrost, which would further accelerate warming.

The exact implications will only become clear once more analysis work is done using the latest generation climate models. In the meantime, the IPCC’s special report on 1.5C, published last year, remains the most up-to-date and robust assessment of the carbon budgets needed to meet the Paris goals.

The post Guest post: Why results from the next generation of climate models matter appeared first on Carbon Brief.