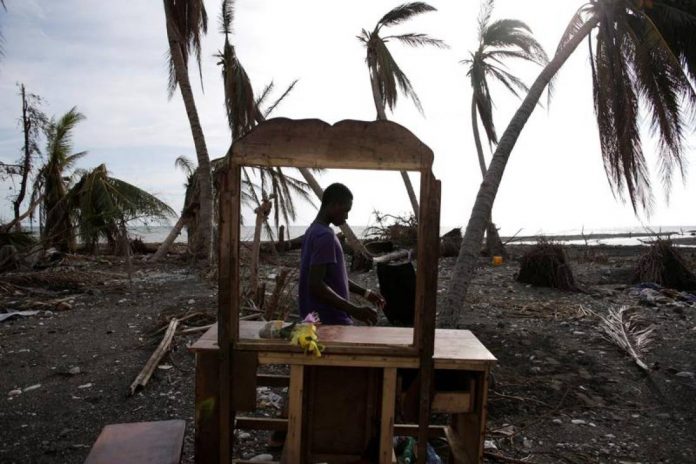 BONN, Germany, Nov 9 (Thomson Reuters Foundation) – Haiti, which was hit last year by its strongest hurricane in 50 years, has been ranked the country worst-affected by extreme weather in 2016, in an index published on Thursday.

Fiji is president of this year’s U.N. climate talks, where small island states are pushing for urgent action to curb planet-warming emissions, which are expected to bring worse storms, floods, droughts and rising sea levels.

“And there’s not been a day when we’ve gone to work not knowing when another cyclone is happening,” he said on the sidelines of the Nov. 6-17 Bonn talks.

When a storm can severely impact the economy and health of a relatively large island state like Fiji, “you can imagine the devastation it can do to a smaller island nation”, he added.

Between 1997 and 2016, more than 520,000 people died in over 11,000 extreme weather events including storms, floods and heat waves worldwide, the index said. The economic damages amounted to about $3.16 trillion, according to Germanwatch.

Nine of the ten worst-affected nations in that period were developing countries, with Honduras, Haiti and Myanmar suffering most, the index showed.

“But industrialised nations must also do more to address climate impacts that they are beginning to feel at home,” said David Eckstein of Germanwatch, one of the authors of the index.

The index does not take into account slow-onset climate risks such as rising sea levels or melting glaciers.

Some countries like Haiti, India, Sri Lanka and Vietnam are repeatedly hit by extreme weather and have no time to recover fully, Germanwatch noted.

“Especially in smaller states, the consequences are hardly bearable,” said Eckstein. Those losses underline how important it is to help poor countries adapt to climate change and deal with the damage caused by extreme weather, he said.

“Especially at a climate summit under Fijian presidency, these issues have to receive the highest priority,” he added.