Tropical Storm Harvey, which has shattered longstanding weather records, would’ve spelled disaster for just about any city it struck. After all, parts of the Houston area have received half their annual rainfall in just a few days’ time.

Yet Houston is not an ordinary city when it comes to flood infrastructure. And this flood has lessons for policymakers at all levels of government — including President Donald Trump — about how to protect Americans in an era of rising disaster risks related to population growth, aging infrastructure, and climate change.

To some extent, the scenes of a major American city underwater seems like Mother Nature’s riposte to the Trump administration, which has spent 7 months methodically reversing the climate change policies enacted of President Barack Obama. From the planned pullout of the Paris Climate Agreement to an executive order pulling back Obama-era protections mandating that infrastructure plans take sea level rise into account, Trump is setting more American cities up for future Harvey-level disasters.

The Houston flood is likely to go down in history as the worst flood in any U.S. city on record.

That’s no surprise to experts who have long warned about Houston’s vulnerability to tropical storms and hurricanes. The city is low-lying, rapidly growing, and its government is paying little attention to long-term disaster risk management and resilience.

History is replete with examples of severe Houston floods, including Tropical Storm Allison in 2001, which killed 41 and caused $9 billion in damage, as well as flooding in 2016 that shut down the city for days.

Houston is America’s poster child of sprawl — with development policies that give little regard to the need for drainage systems. The city is criss-crossed by a complex network of bayous that are easily overwhelmed by heavy rain, made worse by sudden inflows of water from impervious surfaces like concrete.

“Given that you have a city of 6.5 million people with a floodplain mostly paved over and populated, there’s a risk of this always,” said Adam Sobel, a professor of Earth and environmental sciences at Columbia University.

Katharine Hayhoe, a climate scientist at Texas Tech University, said Houston is a “perfect storm” of flood risk due to population growth, crumbling infrastructure, and development based on the “obsolete assumption” that we have a stable climate. Houston’s infrastructure flaws and extraordinary vulnerability to hurricanes were detailed in investigative reporting published last year by ProPublica and the Texas Tribune.

Research by Texas A&M University, detailed by ProPublica and the Texas Tribune, shows that  almost 30 percent of freshwater wetlands were lost between 1992 and 2010. Such areas help absorb freshwater runoff and reduce the severity of flooding. These wetlands have been replaced with impervious surfaces, such as parking lots and roadways.

Was this climate change? Sort of

Sobel, Hayhoe and others say that climate change may have played an important, but backseat role in creating the Houston flood disaster, with development decisions serving to more sharply heighten Houston’s vulnerability to flash flooding.

“I think it’s clear that this storm or something close to it could’ve happened without any climate change,” Sobel said, adding that climate change may have exacerbated the storm’s hazards.

As for global warming’s possible role in this event, climate scientists say there are aspects of this storm that are suspicious, and may point toward possible links to global warming.

One is the sheer amount of rain, upwards of 40 inches already, with final rainfall totals of 50 inches not out of the question. If this is reached, it would set an all-time Texas record.

Another is the sheer tenacity of the storm, which has remained a named tropical storm longer than any landfalling tropical cyclone in Texas’ history, according to hurricane statistics expert Philip Klotzbach of Colorado State University.

The science linking Harvey to global warming is tenuous, however, but may be firmed up over time by peer reviewed studies.

Scientists suspect that the storm has lasted longer over land and dumped more rain than it otherwise would have, thanks to the ability of a warmer atmosphere to contain more moisture.

Studies published in the past few years have shown that extreme precipitation events are becoming  more common and more extreme in many parts of the world as the air and oceans continues to warm, and that this trend is expected to continue.

With tropical storms and hurricanes, computer model simulations show that future storms are likely to be wetter, posing even greater inland flood challenges than we’re used to now.

There are elements of Harvey that stand out, including the 16.07 inches of rain that fell in Houston on August 27, setting a record for the wettest day in that city’s history. The storm has dropped so much rain in southeast Texas that the National Weather Service had to add a new color to its maps.

Scientists are likely to conduct extreme event attribution studies on the heavy rainfall from Hurricane Harvey, Sobel said, and these are likely, though not guaranteed, to show a climate change-related increase in the odds for such extreme rainfall amounts.

“If I had to guess what those studies to show they’ll indicate that rainfall was magnified somewhat by the warmer atmosphere so that whatever the cost of this event… it will be a little higher than it would’ve otherwise been,” Sobel said.

Hayhoe agrees, saying, “Will there be more rain associated with a given hurricane? That is not a hard question to answer: The answer is yes.”

The rainfall totals have reached a historic magnitude in large part because the storm has sat nearly stationary since Saturday, pulling in moisture off the Gulf of Mexico and dumping it on southeast Texas.

Tropical Storm Harvey has been caught between two high pressure areas, a strong one to the west and another to the east. These have left it up to its own devices, as upper level steering currents collapsed.

Sobel said the storm’s lack of movement is unlikely to be related to global warming.

“Every event has many causes and the predominant one is always natural. But climate change can amplify the odds,” Sobel said.

Kevin Trenberth, a climate scientist at the National Center for Atmospheric Research (NCAR) in Boulder, Colorado, said the historic rains can be thought of as the result of a combination of a climate change-related increase in water vapor plus a big contribution from natural weather patterns, which can greatly amplify the water vapor present in a given storm. 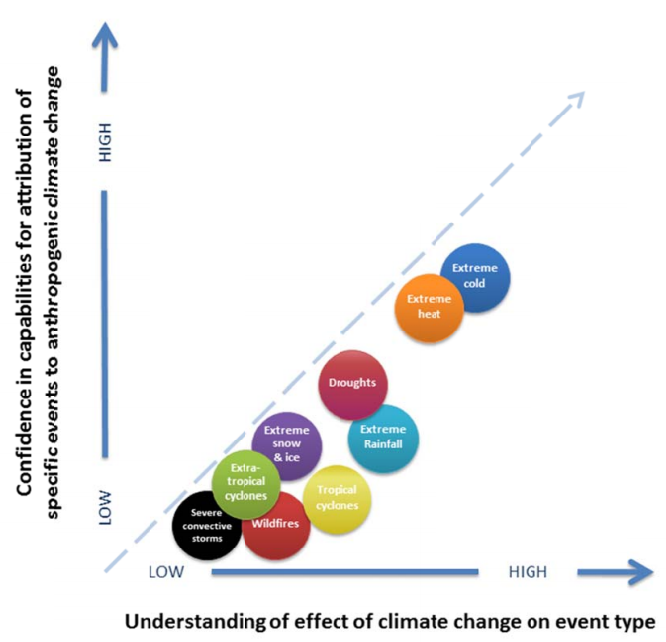 “The outstanding thing about recent storms has been the prodigious rainfalls: over Louisiana one year ago, and the with [Hurricane] Matthew in October last year,” he said in an email.

“In both cases record amounts of total column water vapor (called precipitable water) were recorded with radiosondes. No wonder the flooding occurred,” Trenberth said, referring to measurements from weather balloons.

Hayhoe said reducing flood risk in cities like Houston will require sustained investments in improved infrastructure. Such actions would need to take into account the fact that our climate is changing, and that what was once a 500-year-flood is now closer to a 1-in-50 year event.

“If we build based only on what we’ve seen in the past, we won’t be able to cope with the naturally-occurring weather and extreme events that we get today, many of which are being exacerbated by the changing climate,” she said.

“Unfortunately, long-term planning and investment is not really a hot topic or a soundbite these days for many politicians,” she said. “It’s a very difficult thing to do.”