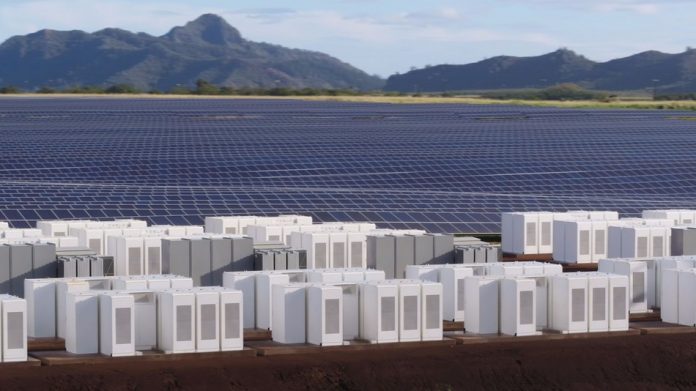 A Hawaiian island is one step closer to getting 100 percent of its electricity from renewable sources.

Unveiled on Wednesday, the Kapaia project features 54,000 solar panels. But that’s not what makes it so unique.

Perhaps most importantly, it includes over 270 of Tesla’s Powerpack batteries, which will store some of the solar power created during the day and supply those electrons to the grid in the evening.

The project — the largest of its kind — is expected to displace about 1.6 million gallons of diesel per year, Tesla said in an email.

Energy experts say storage is essential for making renewables competitive with fossil fuels. Unlike coal and natural gas plants, which operate on command, solar and wind farms operate intermittently and at different hours.

Batteries could also help utilities to harness the collective power of thousands of rooftop solar systems. With “virtual power plants,” utilities can digitally aggregate solar-battery systems in an area to utilize their power all at once, simulating the flow from a singular power plant.

Across the Hawaiian islands, utilities are required to get 100 percent of their electricity from renewable sources by 2045 — the most ambitious Renewable Portfolio Standard of any U.S. state.

Kauai’s main utility says it is well on its way to meeting that target thanks to a growing number of solar, small-scale hydropower and biomass projects.

Kauai Island Utility Cooperative (KIUC) is the lone purchaser of power from Tesla’s solar-battery system on the island. The arrangement marks the first time a U.S. utility has contracted out a system that stores and releases solar power after sunset.

Before this week, KIUC could operate using 100 percent of renewables, but only during occasional mid-day periods of high solar generation. The Kapaia project will allow the utility to operate at 100 percent renewables more often, and with greater stability, in the middle of the day, Tesla said.

Tesla’s Powerpack batteries in Kauai were made at its $5 billion Gigafactory in Nevada.