Home Politics Economics Here's what to watch for in the vote to extend California's cap-and-trade... 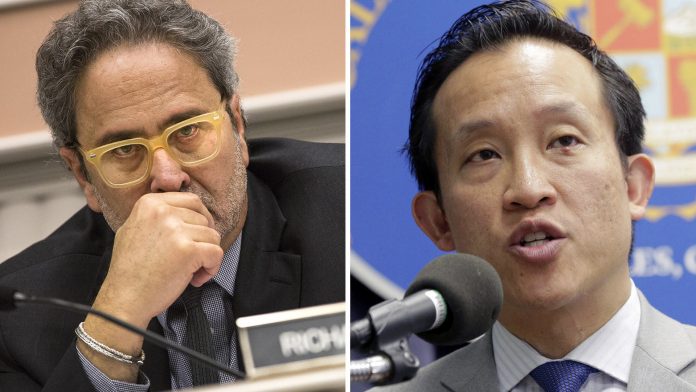 Gov. Jerry Brown dusted off his little-used political mailing list on Friday to send an urgent message to his supporters: The time to rally around cap-and-trade is now.

“THIS ISN’T FOR ME, I’M GOING TO BE DEAD. IT’S FOR YOU AND IT’S DAMN REAL! So I just ask you, take it seriously,” blared the email signed by Brown, along with an all-caps plea for readers to call their legislators.

The legislation to extend the life of California’s signature tool against climate change — under which companies must buy permits to emit greenhouse gases — is hurtling toward a vote Monday.

It was never going to be easy. Brown is seeking a two-thirds vote to reauthorize the cap-and-trade program until 2030, a threshold that would help guard the program against future legal challenges. Scrounging up a supermajority is always tough — particularly when Democrats approved a politically fraught gas tax just a few months ago.

Here’s what you need to know ahead of the high-stakes vote.

One component of the package — Assembly Bill 617, a measure to tackle local air pollution — requires just a majority vote: 41 votes in the Assembly and 21 in the Senate.

But the steeper hurdle is the measure to reauthorize cap and trade, AB 398. To pass with a supermajority, that bill will need 27 votes in the Senate and 54 in the Assembly. Democrats hold those exact numbers in both houses. But in the Assembly, at least one member, Assemblywoman Jacqui Irwin (D-Thousand Oaks), will be out all week. Her office said her absence is due to a long-standing family commitment, for which she got permission to be excused in January.

With Irwin out, that means Democrats are one short of a supermajority in the Assembly. That means cap and trade’s future hinges on at least one Republican vote.

Republicans in the spotlight

One GOP vote is the minimum Brown needs, but he’s aiming to get a lot more. Some Republicans, particularly a faction in the Assembly led by Assembly GOP Leader Chad Mayes (R-Yucca Valley) and Assemblyman Rocky Chavez (R-Oceanside), made it clear earlier this year that they wanted to be in the mix on climate negotiations.

Republicans have extracted a number of concessions, including a repeal of a fire prevention fee levied on mostly rural landowners and an extension of a tax credit for manufacturers that was due to expire in 2022. The tax break would also be broadened to include power companies.

Late Friday, Mayes introduced a new measure that would require a midway check-in point to approve how cash generated by cap and trade would be spent. It would require a one-time supermajority approval, as opposed to the majority vote typically necessary, as a way to ensure that Republicans have more influence in doling out those revenues.

Mayes’ office did not indicate whether the additional measure would move any of his caucus members to the “yes” column.

Meanwhile, Senate Republicans have shown less interest in backing the cap-and-trade extension. But two members are worth watching: Sen. Anthony Cannella (R-Ceres), the sole Republican to vote yes on the gas tax, and Sen. Tom Berryhill (R-Modesto) were conspicuously absent among the signatories of an anti-cap-and-trade letter issued by the Senate GOP caucus on Thursday.

Environmentalists are divided, while businesses are mostly on board — but what about farmers?

The proposal has exposed rifts among environmental advocates. Some national organizations, such as the Environmental Defense Fund and NextGen Climate, founded by billionaire activist Tom Steyer, have embraced Brown’s plan. Others, such as the Sierra Club and environmental justice groups focused on battling local pollution, remain staunchly opposed, arguing the package is too friendly to industry concerns.

The legislators carrying the bills — Assembly members Eduardo Garcia (D-Coachella) and Cristina Garcia (D-Bell Gardens) — are among those most identified with the environmental justice cause in the Capitol. On Saturday, they vouched for the measures in a call with reporters.

“I would not be moving forward if this was not a balanced package,” Garcia said.

Business interests, meanwhile, have largely come together behind the plan. Utilities, clean-technology companies and manufacturers have endorsed the proposal. Oil companies have not taken a public position on the bill, but allies such as the state construction workers union, which has members working in refineries, are vocal backers.

A key holdout has been the agriculture industry. A coalition of farm groups, including the Western Growers Assn. and the California Farm Bureau, have said they’re opposed to the proposal unless they can get firm commitments that nearly 19% of the money generated by cap-and-trade revenues will go to agriculture interests, such as programs to upgrade harvesting equipment, heavy-duty trucks and tractors.

Brown has been reluctant to make firm promises on how the cap-and-trade money would be spent in its new phase, fearing it would set loose a frenzy of interests making a grab for those dollars.

But farmers say their industry has been harmed by cap and trade, which makes operating any equipment running on diesel more expensive, and other state environmental regulations.

“Our [agriculture] folks are being forced to compete in a global market,” said Assemblyman Jim Cooper (D-Elk Grove), whose district is home to grape, cherry and peach growers, along with dairies. “Some of the laws we’ve passed are very stringent, so their costs are much higher.”

Agriculture businesses hold sway with both Republican and Democratic lawmakers. One legislator, Assemblywoman Cecilia Aguiar-Curry (D-Winters), posted a sign on her office door to fend off lobbyists pushing the bill: Until agriculture felt satisfied, it indicated, “It’s a no — until you know what.”

Housing pushes its way into the debate

While the governor has prioritized cap and trade, many progressive lawmakers believe the state’s housing problems are more urgent. But a deal to increase funding for low-income developments and ease home-building regulations has been elusive.

As cap-and-trade talks heated up, a bloc of Assembly Democrats, led by Richard Bloom of Santa Monica and David Chiu of San Francisco, took the opportunity to push for a housing package at the same time.

“My office has been working overtime behind the scenes to get this done,” Bloom said. “We have an housing affordability crisis and solutions that can provide immediate relief, so it is imperative that we act now.”

The approach has gained steam. Last Wednesday, De León and Rendon announced they were moving the cap-and-trade vote to Monday in part to “allow our discussion on long-term housing affordability solutions in California to catch up to the climate effort.”

Still, a big hurdle looms. Any proposal to meaningfully increase low-income housing funding, such as a proposed $75 fee on real estate transactions, will require a two-thirds supermajority vote of the Legislature. So decisions on cap and trade and a housing package mean at least two more of those votes for weary lawmakers.

What will ‘targeted’ lawmakers do?

The politics of cap and trade can be thorny: Californians typically support the state’s aggressive climate action, but are wary of paying more at the pump and for other goods due to the regulation.

That poses a particularly tricky question for Democrats in swing districts who are prime targets for Republican challengers next year: whether to support the cap-and-trade package.

State Sen. Josh Newman (D-Fullerton), who is facing a recall effort for his vote on the gas tax, said he is still considering the proposal. Assemblywoman Sharon Quirk-Silva, who also represents Fullerton, has been clear that she’s opposed, according to her chief of staff.

But Assemblyman Al Muratsuchi (D-Torrance), another so-called targeted member, is not only an aye vote, but has signed on as a co-author to both the cap-and-trade and air quality measures.

Muratsuchi said the package addresses issues close to his district, such as the “toxic emissions and pollutants coming from excessive flaring that we’ve been having at the Torrance refinery.”

“It’s clearly a significant vote,” Murastuchi said, when asked if the issue was politically perilous. “But I do agree with the governor that [it’s] going to be one of the most important votes that we’re going to cast this session.”

Climate change may make it too hot to fly, study says