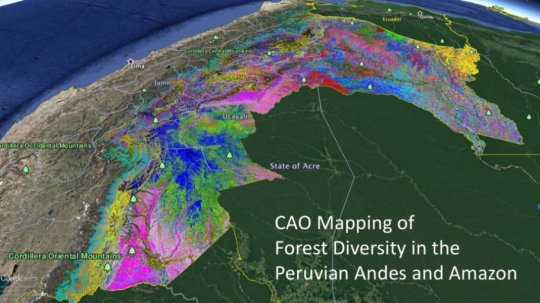 New remote sensing maps of the forest canopy in Peru test the strength of current forest protections and identify new regions for conservation effort, according to a report led by Carnegie’s Greg Asner published in Science.

Asner and his Carnegie Airborne Observatory team used their signature technique, called airborne laser-guided imaging spectroscopy, to identify preservation targets by undertaking a new approach to study global ecology — one that links a forest’s variety of species to the strategies for survival and growth employed by canopy trees and other plants. Or, to put it in scientist-speak, their approach connects biodiversity and functional diversity.

The study of biodiversity traditionally uses fieldwork to inventory the types of species living in a habitat. And current Earth-observing satellites cannot observe forests with this level of detail. Asner and his flying laboratory team were able to bridge this gap between field biodiversity studies and satellite-based mapping by revealing the distribution and concentrations of the key plant chemicals that indicate a forest canopy’s function as well as its identity.

“We developed a new approach to simultaneously map both the functional and biological composition of forest canopies throughout the Peruvian Andes and Amazon basin,” Asner said. “This led to the discovery of previously unknown forest assemblages, and allowed us to assess how Peru is doing in their network of conservation protections, including on land controlled by indigenous peoples.”

“Protecting representative networks of parks and reserves is a cornerstone of biodiversity conservation. The designs of these networks are based on imperfect data, often with many gaps, especially in tropical countries like Peru where vast regions remain to be sampled. In a brilliant effort that straddles basic science and conservation, Asner and his team offer those working in applied conservation biology a new kind of road map to detect critical omissions in such regional networks,” said Eric Dinerstein, Director of Biodiversity and Wildlife Solutions at Resolve.

Their approach works because plants are like individual chemical factories, taking in nutrients, water and carbon, and synthesizing a portfolio of products. Measuring the concentrations of different chemicals over large swaths of the forest canopy indicates what strategies plants are employing for growth and survival, and how these strategies vary by geography, topography, hydrology, and climate.

Major risks to tropical forests in Peru include gold mining, oil palm plantations, and cattle ranching, which have spurred the majority of a 500 percent increase in deforestation since 2010, in addition logging and oil exploration, according to Carnegie’s project partner, the Peruvian Ministry of Environment (MINAM). Despite ongoing forest losses, the Carnegie and MINAM team was able to find about 30 million acres of biologically unique lowland Amazonian forest and 7 million acres of peatland forest in northern Peru that could be conserved, as well as 1.5 million acres of distinct submontane and high Andean forests that are highly threatened.

Asner and an international network of colleagues are now ready to take the Carnegie approach to Earth orbit.

“The technique we developed and applied to map Peru is ready to go global,” Asner said. “We want to put the required instrumentation on an Earth-orbiting satellite, to map the planet every month, which will give the best possible view of how the world’s biodiversity is changing, and where to put much needed protections.”

If and when the CAO spectrometer is launched into space, conservationists will have the most useful tool ever created to do something brand new: see biodiversity from space,” noted Dinerstein.

Materials provided by Carnegie Institution for Science. Note: Content may be edited for style and length.