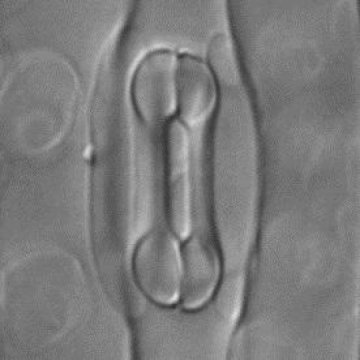 New work from a joint team of plant biologists and ecologists from Carnegie and Stanford University has uncovered the factor behind an important innovation that makes grasses — both the kind that make up native prairies and the kind we’ve domesticated for crops — among the most-common and widespread plants on the planet. Their findings may enable the production of plants that perform better in warmer and dryer climate conditions, and are published by Science.

All land plants take in carbon dioxide (CO2) from the atmosphere and “exhale” oxygen and water vapor. This exchange is required for plant growth; the carbon dioxide is made into sugars by photosynthesis, the process by which plants turn the sun’s energy into food. But it also is a major driver of global climate cycles.

A plant needs to balance its ability to take in CO2 with the potential to lose water. To achieve this balance it uses tiny, cellular valve-like pores on the surfaces of its leaves called stomata (after the Greek word for mouths). In grasses, these valves are particularly well-tuned; they can open wide to maximize CO2 uptake and shut down quickly when the surrounding conditions would lead to increased water loss.

Because grass crops like corn, wheat, and rice are a major food source, the Carnegie-Stanford group wanted to know why the stomata in these particular plants work so much better than stomata in other plants. One obvious feature is that in most plants, stomata are made up of just two so-called “guard cells,” but grasses have an additional pair of cells on either side, which are called “subsidiary cells.” These subsidiary cells enable the guard cells to open and close especially quickly.

In addition, while the guard cells of many plants have a kidney shape, grass guard cells are an unusual “dumbbell” shape. The subsidiary cells alongside these dumbbell-resembling cells provide a mechanical boost to enable them to open wide.

In this study, led by Dominique Bergmann, an honorary adjunct staff member at Carnegie’s Department of Plant Biology and Professor at Stanford University’s Biology Department, the researchers used a relative of wheat called Brachypodium to demonstrate that all grass stomata with a four-cell configuration, including the two subsidiary cells, are indeed more responsive to changing environmental conditions, and have a wider range of apertures for pore opening and closing. This sensitivity likely enhances the plant’s performance, particularly in high temperatures or drought conditions.

Furthermore, the team — including lead author Michael Raissig of Stanford and Carnegie Global Ecology’s Acting Director Joseph Berry — used sophisticated research techniques to identify a specific gene that enables Brachypodium to form the lateral subsidiary cells. The gene, called BdMUTE, encodes a protein that is considered a “master regulator” of cell behavior by turning on and off other genes that give cells their unique properties. Without this master regulator, Brachypodium stomata resemble the more primitive two-celled stomata found in other plants, and the research team showed that grasses with these two-celled stomata perform poorly.

What was particularly interesting and surprising is that BdMUTE isn’t a brand-new protein found only in the grasses. Rather, it is a slightly modified version of protein that, a decade ago, was shown to have a different role in making two-celled stomata in the broadleaf mustard plant Arabidopsis. When an Arabidopsis cell is exposed to this version of the MUTE protein, it gets the message that it should commit itself to making guard cells. In Brachypodium, however, the protein moves out of the guard cell precursors into the neighbor cells and then induces these neighbors to become subsidiary cells in the four-celled complex.

“Could the mobility of the grass version of MUTE be the key to this master regulator’s ability to set up these physiologically improved, four-celled grass stomata?” Raissig asked.

“And could this finding be utilized to make crops more resistant to warm climates and water-scarce conditions?” added Bergmann. “This presents an interesting target for further research that aims at engineering stomatal form and function to help crops cope in a changing climate, and ultimately, provide food for our ever-growing population.”

“This elegant work from Dominique and colleagues is a beautiful illustration of how plants evolved developmental solutions to tackle physiological problems.” said Sue Rhee, Director of Carnegie’s Plant Biology.